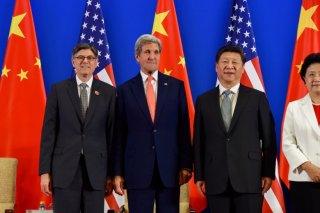 Is the Obama administration trying to achieve a modus vivendi with China over the South China Sea? If so, this year’s Strategic and Economic Dialogue (SED) held 6–7 June in Beijing was a good opportunity to pursue it.

Now in its eighth year, the SED has proved to be an indispensable high-level policy forum for the two countries to manage disputes and expand cooperation. Chinese scholars refer to the dialogue as a valuable ‘pressure-relieving valve’ during a time of strategic tension between the two countries. US Assistant Secretary of State for East Asian and Pacific Affairs Daniel Russel has hailed the SED as a ‘flagship dialogue’ in a briefing before this year’s meetings.

The signs are, however, that the Obama administration is determined to confront China over the South China Sea, just as China is determined to continue its island building. Barely two weeks before the SED, President Obama paid a high-profile visit to Vietnam, where he announced that Washington’s decades-old arms embargo on Vietnam would be lifted. Dramatic upgrading of US–Vietnam defence relations is likely to be seen in Beijing as another attempt to ‘encircle’ China in the larger US strategy of the Asian rebalance.

Just four days after Obama’s announcement in Hanoi, US Secretary of Defense Ashton Carter delivered a speech at the US Naval Academy. In it, he criticized China for erecting ‘a Great Wall of self-isolation,’ while also announcing the Pentagon’s plan to send the latest military assets to the Asia–Pacific. Carter repeated the ‘a Great Wall of self-isolation’ characterization again during his major speech at this year’s Shangri-La Dialogue in Singapore, just two days before the SED in Beijing.

More importantly, since the beginning of this year, the US seems to be laying down two red lines for China in the South China Sea, warning Beijing against reclaiming the Scarborough Shoal or establishing an Air Defense Identification Zone (ADIZ) over the region. In a press conference during the Shangri-La Dialogue, Carter stated that any more provocative and destabilising actions from China in the South China Sea would elicit stronger US action. Separately but almost concurrently, during a visit to Mongolia just before traveling to Beijing for the SED, US Secretary of State John Kerry said that the US would consider any Chinese establishment of an ADIZ over the South China Sea to be a ‘provocative and destabilizing act.’

The combined effect of America’s Asia policy in recent days has been to intensify strategic distrust between the two countries. In fact, it has served to overshadow the importance of SED for managing such distrust. It’s puzzling why the US has chosen to ratchet up confrontational rhetoric against China just before the SED, rather than, say, after it. Given Washington’s rather overheated rhetoric on the South China Sea, might future iterations of the SED achieve any breakthrough in this most volatile area of US–China strategic relations?

One possible answer to that question is depressing for those who hope for a quick US–China rapprochement over the South China Sea. Washington may have decided that the SED simply isn’t the best or the most effective forum for addressing the issue. When it comes to the South China Sea, the two sides simply talk past each other. That’s a reality that has been acknowledged by the commentariat, as well as by my source at the Chinese Foreign Ministry. Reasonable compromise is beyond reach.

At this year’s SED, the US side reiterated America’s support for a peaceful resolution based on international law (read: China should accept an impending ruling of the Philippines v China arbitration case), as well as its opposition to unilateral actions to alter the status quo (read: China’s island building). China, on the other hand, repeated its opposition to the Permanent Court of Arbitration case and expected US neutrality in sovereignty disputes, while refusing to give up an inch of its island building.

Given this state of affairs, the US side may have concluded that bilateral discussion—even in a forum as high-profile as the SED—is futile for realizing its objectives in the South China Sea. It has therefore tried to present the issue in regional and international forums to impose diplomatic and reputational costs on China by pressuring and shaming it. But China deeply resents the US attempt to ‘internationalize’ the South China Sea issue. Not so happily, it has recently been compelled to stage its own public relations campaign to win international support for its position. The strategic and diplomatic competition between the US and China over the South China Sea is only getting worse.

It’s in the interests of both China and the US to engage in a serious dialogue on maritime security at the highest level, involving both civilian and military leaders. The SED may be expanded to include such a new track on maritime security, or such a new strategic dialogue should be created separately. That the SED hasn’t been able to achieve anything over the South China Sea says less about the institution itself than about the seriousness of US–China differences over maritime security in the Western Pacific. It’s time for both countries to recognise the severity of the differences between them and take concrete steps toward reaching a strategic compromise.

Feng Zhang is a Fellow in the Department of International Relations at the Australian National University’s Coral Bell School of Asia Pacific Affairs and an Adjunct Professor at the National Institute for South China Sea Studies in China.