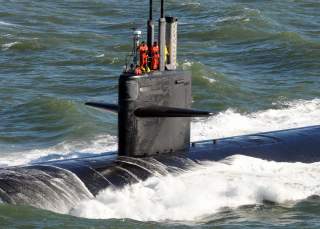 One of the toughest challenges for military allies to sort out is a sensible division of labor when it comes to expensive high-tech weaponry. A case in point is South Korea’s interest in developing extremely expensive nuclear submarines, which also raise nuclear proliferation concerns.

Although South Korea has invested heavily in conventional subs, operating eighteen of the vessels with more on the way, Yonhap News Agency recently reported, “The Moon administration is considering the acquisition of nuclear-powered submarines to counter the North's fleet of around 70 military subs, some armed with ballistic missiles.” The same article noted that Seoul would require that at least one of these submarines would be operating at all times. The main rationale for acquiring nuclear subs (SSNs) is that unlike conventional submarines, which must surface every few days or weeks for air, the nuclear reactors allow SSNs to stay submerged indefinitely. This will allow them to track North Korea’s emerging submarine-launched ballistic missiles.

This capability does not come cheaply. One way South Korea could acquire nuclear submarines is by buying or leasing American-built SSNs. It’s unclear if this option is feasible since the United States has never sold nuclear-powered submarines to another country. Still, assuming that it is, the question becomes how much would this cost South Korea?

The Australian Strategic Policy Institute examined this question in a 2012 report by Andrew Davies. It explored how much it would cost Australia to purchase Virginia-class SSNs from the United States.

[The U.S. Navy’s] goal is to reduce costs to $2.24 billion per vessel and the time required to build each ship to about 60 months. Under the US Foreign Military Sales regulations, any submarine purchased by Australia would cost a little more than the cost of production for the USN. A working figure might be US$2.5 billion, with a lead time of at least five years, although that figure does not include the support systems, infrastructure investment and other costs that would also be incurred.

If this figure is correct, it would cost South Korea around $7.5 billion to purchase three SSNs before accounting for the substantial operating costs, personnel training and infrastructure investments.

To gauge the cost of an indigenous effort, it would again be helpful to look at other countries’ experiences. One potentially helpful comparison is Britain’s program to build seven Astute-class SSNs. This is obviously an imperfect comparison since Britain has prior experience with SSNs and is using reactors from its older ballistic missile submarines (SSBNs) for the Astute-class subs. Nonetheless, it’s a useful starting place.

The Astute-class submarines have been beset by repeated problems since the program began, including myriad operational challenges and massive cost overruns. The current cost estimate is that the seven submarines will cost $13.3 billion, or nearly $2 billion per ship. Even this is misleading because the unit cost is driven down by how many vessels Britain is procuring. The lead ship of the class was $2.6 billion over budget. Thus, an extremely optimistic estimate is that the first three ships would cost $7 billion.

Another useful example is Brazil’s efforts to acquire a nuclear attack submarine. Brazil is teaming with the French firm, DCNS, to build the SSN. According to the contract, DCNS will provide “design assistance and production of the non-nuclear part of the first Brazilian nuclear powered submarine, including support for construction of a naval base and a naval construction site.” Brazil itself will provide the nuclear reactor that will power the submarine. Altogether, the SSN will cost $2.4 billion, with about $1.5 billion of that going to the nuclear reactor. Once again, this suggests a cost of at least $7 billion for three South Korean SSNs.

The Brazil case is informative in another way: Brazil is also constructing a submarine pen to house and protect the nuclear-powered submarine. This is something South Korea might also need if it builds SSNs. Although Seoul recently built a new naval base in Jeju-do in part to house its conventionally-powered submarines, a hardened submarine pen to protect the SSNs would likely be necessary in light of their enormous expense and North Korea’s increasingly accurate MARV (maneuverable reentry vehicle) missiles. Brazil estimates its new base will cost around $2.1 billion.

In light of this, it is worth asking whether it would be wise for South Korea to invest $7–9 billion in SSNs when other capabilities exist to deal with the threat of North Korea’s nascent submarine-launched ballistic missiles. A number of other possibilities could be explored. For instance, South Korea could buy at least seven times as many conventional submarines as SSNs. While these individually aren’t as capable as nuclear-powered submarines, quantity has a quality all its own, especially given that Seoul is facing a North Korean force of nearly eighty subs. In addition, as the National Interest has repeatedly covered over the years, there are a bunch of emerging technologies that make detecting and tracking submarines far easier than ever before. South Korea could also put more money into other anti-submarine capabilities such as the P-8A Poseidon Maritime Surveillance Aircraft. Improving missile defense is another option that should be considered.

Another advantage of these options is that they don’t pose nuclear weapons proliferation concerns like the SSNs do. The nuclear reactors on these submarines would require enriched uranium. If South Korea was to buy this fuel from the United States—or Washington was to allow South Korea to enrich U.S. uranium on its territory—this would violate U.S. non-proliferation restrictions, forcing Congress and the White House to wrangle over how to rearrange the rules and for Washington to renegotiate a new nuclear cooperative agreement with Seoul. This would take time and risk encouraging other nuclear submarine aspirants, including Iran, to build their own SSNs. None of this would help strengthen U.S.-South Korean security relations at a time when that is desperately needed to confront the North Korean threat.