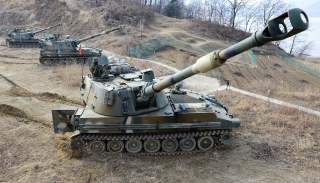 South Korea is quickly becoming a major player in the global arms business, according to a new think-tank report.

This week, Sweden’s Stockholm International Peace Research Institute (SIPRI) released the 2016 edition of SIPRI Top 100, its annual report on the exports of the one hundred largest defense companies in the world. Among its findings was that South Korean firms in the Top 100 increased their arms sales by 20.6 percent compared with 2015, making it by far the largest increase among countries with more than 1 percent of the total value of the Top 100.

“South Korean arms producers continue to dominate the emerging producer category with seven companies ranked in the Top 100 for 2016,” the report stated. “Their combined arms sales totalled $8.4 billion, representing a 20.6 per cent increase in sales compared with 2015.” The other countries that constitute SIPRI’s “emerging producers” category are Brazil, India and Turkey. Turkey actually saw its arms sales increase by a greater amount than South Korea—27.6 percent—but its total arms sales still account for less than 1 percent of the total value of the Top 100. Overall, the emerging producers combined for a total of $17.8 billion in sales in 2016.

South Korea’s combined arms sales of $8.4 billion account for 2.2 percent of the total value of Top 100. This is a significant increase from the $297 million in arms that South Korea’s defense industry reportedly exported in 2006. The $8.4 billion in exports that South Korean companies in the Top 100 sold in 2016 puts it in line with countries like Japan and Israel—which SIPRI considers “other established producers”—and ahead of Germany and India.

In discussing South Korea’s rise on the Top 100 list, Siemon Wezeman, a senior researcher at SIPRI who is a coauthor of the report, said: “Continuing and rising threat perceptions drive South Korea’s acquisitions of military equipment, and it is increasingly turning to its own arms industry to supply its demand for weapons.” He added, “At the same time, South Korea is aiming to realize its goal of becoming a major arms exporter.”

The leading South Korea firm on the Top 100 list was Korea Aerospace Industries (KAI). KAI has had considerable success selling its T-50 Golden Eagle supersonic trainer jet, especially to Southeast Asian countries. The first international customer for the T-50 was Indonesia, which agreed to purchase sixteen jets in 2011. The South Korean firm inked a deal in 2014 to sell the Philippines twelve of the T-50 trainer jets. The last of these are expected to be delivered to the Philippines in 2018. Thailand acquired four T-50s from KAI in 2015 and announced earlier this year that it was buying an additional eight planes in a deal worth $258 million. Beyond Southeast Asia, Iraq also signed a contract reportedly worth up to $1.1 billion to purchase twenty-four variants of the T-50 from KAI back in 2013. Most notably, however, KAI is bidding for the U.S. Air Force’s T-X program. Under that program, the U.S. Air Force will be replacing its 350 aging T-38 trainer jets, at a reported cost of $16 billion.

The second largest South Korean arms exporter on SIPRI’s Top 100 was LIG Nex1. According to a 2013 article in the Korea Herald, a local newspaper, “LIG Nex1’s major export items include the portable surface-to-air missile called the Chiron, the Korea GPS-guided bomb and the medium-range 3-D air defense surveillance radar.” The third South Korean firm on the list is Hanwha Corp., which has significantly expanded its defense operations through a number of high-profile acquisitions. The four remaining firms are Hanwha Techwin, DSME, Hanwha Group, and Poongsan Corp.

Earlier this year, Yonhap News Agency reported, citing estimates by the Korea Institute for Industrial Economics & Trade (KIET), that South Korea's arms exports could reach $12 billion in 2017 if KAI wins the U.S. Air Force’s T-X program. It now seems unlikely that the winner of that contract will be announced by the end of this year. Still, South Korea’s defense industry’s export ambitions are only growing. In fact, Ben Moores, a defense analyst at the London-based IHS Markit, has said that South Korea might overtake China in arms exports by the end of the decade.