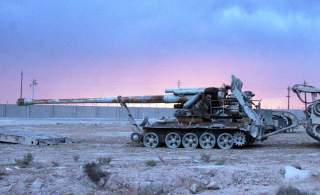 South Korea’s government would like nothing better than a peaceful, no-drama relationship with North Korea, and the administration of President Moon Jae-in clearly hopes that new talks with North Korean dictator Kim Jong-un may de-escalate tensions. However, Seoul must also must prepare for the possibility of a second Korean war, and especially mitigate the damage that could be caused to the capital itself, which lies a little over thirty miles south of the Demilitarized Zone.

North Korea maintain hundreds of long-range Koksan 170-millimeter self-propelled guns, and 240- and 300-millimeter multiple rocket launchers capable of striking Seoul. Further back, it has an arsenal of short-range tactical ballistic missiles patterned on Soviet Scud and Tochka missiles, such as the Hwasong-5 and -6 and the Kn-02. Situated in caves, tunnels and hardened artillery sites, the guns and rockets could inflict significant damage on civilian and military targets and prove difficult to destroy with conventional counterbattery fire.

This was illustrated when North Korean artillery bombarded the island of Yeonpyeong in November 23, 2010, killing four. A battery of six South Korean K9 Thunder howitzers returned fire with eighty 155-millimeter shells, but it remains disputed whether that counterbattery barrage was at all effective.

As a result, the South Korean government announced it would fund development of a ground-launched precision-strike missile specially designed to rapidly take out North Korean artillery systems in their hardened encasements. The South Korean Agency for Defense Development partnered with the Hanwha Corporation, and spent three years and the equivalent of around $418 million developing the new weapon.

South Korea already has license-built an arsenal of over two hundred MGM-140 ATACMS missiles, which can be fired from an M270 multiple-rocket-launcher vehicle and strike targets up to 190 miles away. However, the ATACMS is both too expensive and insufficiently accurate to counter the hundreds of North Korean artillery systems entrenched for a cross-border bombardment.

Korean journalist Lim Chang-won characterizes this new Korean Tactical Surface-to-Surface Missile as “a simplified version of the MGM-140”, which it visually resembles. Though the KTSSM-1 has a shorter range of just seventy-five miles—still adequate for the counterbattery role—its GPS-guidance system is five times more precise, with half of all shots landing within a two-meter radius of the target, instead of ten meters for the ATACMS.

The KTSSM-1 “Artillery Killer” consists of a fixed launcher that can discharge all four of its tactical ballistic missiles in a matter of seconds. Reportedly, the launcher and missiles combined cost roughly $1.9 million each. The missile’s shaped thermal warhead would allow it to penetrate up to 1.5 meters of intervening concrete, and a graphic at a defense expo suggests the missile can maneuver to enter the mouth of a cave.

The Republic of Korea military has released a video of a KTSSM test that shows the ballistic missile effortlessly penetrating the ceiling of an underground bunker, triggering a massive Michael Bay–style fireball that consumes the entire subterranean complex from within.

According to a Korean military spokesperson, the KTSSM-1 would be used to silence Koksan guns and 240-millimeter MRL systems along the DMZ. However, the government also announced it had developed a second KTSSM-2 system for attacking larger, fixed missile assets.

There is limited information available on the KTSSM-2, but it reportedly is a self-propelled system and disposes of two types of munitions: a Block I missile employing a thermal penetrating warhead, and a Block II that utilizes unitary high-explosive payloads. According to the South Korean military, the KTSSM-2 would be tasked with blasting KN-09 three-hundred-millimeter multiple-rocket launchers and Kn-02 tactical ballistic-missile launchers, a reverse-engineered Russian Tochka ballistic missile.

The Ministry of National Defense has announced that it will activate a counterartillery brigade equipped with KTSSMs and Chunmoo multiple-rocket launchers in October 2018, including a Ground Operations Center to coordinate their strikes. Korean artillery brigades typically have three to five battalions with eighteen guns or launchers each, though such a unique unit may have a nonstandard structure.

However, the imminent deployment of the the unit seems to contradict an earlier report by the newspaper Hankyoreh in October 2017, which claimed that deployment of the KTSSM would be delayed from 2019 to 2023 due to difficulty acquiring three hundred components from the United States—notably including military-grade GPS systems, which are harder to jam. It’s not clear whether the export controls have since been overcome, or if deployment of the system will simply occur at a lower rate of production through 2023.

The counterartillery brigade will be the latest addition to South Korea’s Kill Chain defense strategy. If intelligence suggests a North Korean attack is imminent, South Korea would launch a massive preemptive strike against targets throughout North Korea using KTSSMs, Hyunmoo ballistic missiles and F-15K Slam Eagles armed with Taurus cruise missiles. Employing targeting data gleaned from satellite intel, the strikes would attempt to defang North Korea’s key conventional and nuclear weapon capabilities before they could inflict too much damage—though whether Kill Chain would have more success at hunting down mobile ballistic missile launchers than previous attempts is anybody’s guess.

Seoul may be intent on securing a diplomatic solution to tensions with its neighbor, but that has by no means halted its efforts to mitigate the harm inflicted on its populace should the worst come to pass.