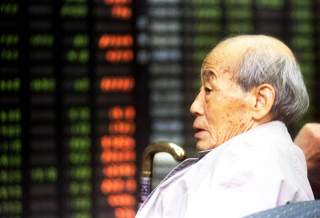 Before focus shifted to China’s looming demographic crisis, and years after the issue had already thrust uncertainty on the prospects for Japan, South Korea was busy becoming the poster child of aging populations.

Some unsettling developments last year, reported over the past couple of weeks, indicate South Korea is not getting closer to a solution.

In December the country for the first time reported more deaths than births amid a plunging fertility rate. The Financial Times reported Sunday:

“Unless there is a change in the social structure, such as easing job shortages or providing more housing, it will be difficult to convince young people to have more children,” said Prof Lee.

Annual economic growth is roughly 3 per cent. But the nation’s manufacturing-heavy, export-oriented model — responsible for South Korea’s rapid development over the past 70 years — is fraying amid increasing competition from neighbour China and the growing threat from artificial intelligence and automation.

Government programs aimed to encourage young parents to have more children have not worked, as has been the case in Japan and in China. And it is unclear that importing labor will ever be excepted as an antidote, as The New York Times wrote last month:

But [Seoul] is not seriously considering broader integration for foreign migrant workers. Most South Koreans, Moon says, “are still very reluctant to entertain the possibility that immigration can be a dynamic, innovative force.”

Yes, it seems that South Korea has no miracle up its sleeves, and the country is not alone, per Quartz:

Declining fertility rates is a trend felt across broader East Asia. Japan has also predicted that its birth rate in 2017 will hit a record low since record keeping began in 1899. Taiwan also recorded the slowest rate of population increase ever in 2017.

The low fertility rate in China will also be its greatest challenge in the coming decades, scholars say.