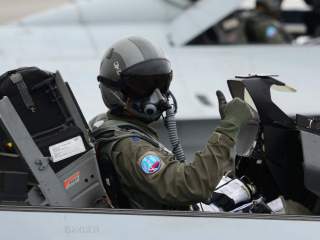 As tensions on the Korean peninsula continue to simmer, Seoul is looking for ways to further strengthen and modernize its military capabilities. Toward that objective, South Korea this week officially kicked off the development of its KF-X fighter aircraft project.

The $14.9 billion project seeks to develop a twin-engine “4.5-generation” multirole fighter to replace Seoul’s increasingly obsolescent fleet of McDonnell Douglas F-4 Phantom IIs and Northrop F-5 Tiger II jet fighters. If the program is successful, South Korea will build 120 of the indigenous warplanes from 2026 through 2032.

“The KF-X project will take the role to lead the development of our aviation industry,” Chang Myoung-jin, the minister who leads South Korea’s Defense Acquisition Program Administration (DAPA) told the Yonhap news agency. “DAPA will develop a locally made fighter jet, which all South Koreans can be proud of.”

The DAPA expects that the KF-X development program will deliver six test aircraft by 2021. Flight tests will start around the same time, with development being completed by mid-2026.

While DAPA will be the government agency supervising the project, Korea Aerospace Industries (KAI) will lead the industrial team that is tasked with bringing the program to fruition. The Korean industrial conglomerate will have its work cut out developing a homegrown active electronically scanned array (AESA) radar, an electronic warfare system, an infrared search and track (IRST) capability and an electro-optical targeting pod. South Korea had asked Washington to transfer those key technologies, but the Pentagon declined to do so.

The country is also negotiating to secure the transfer of twenty-one additional technologies from the United States—negotiations which could take more than three years. Korea had sought the full set of technologies as part of an offset deal for its purchase of forty Lockheed Martin F-35 Joint Strike Fighters. Indeed, Lockheed is the likely U.S. partner for KAI on the KF-X program.

American participation will be smaller than anticipated on the program since KAI will be developing features such as the AESA radar domestically. The KF-X is expected to have about sixty-five percent indigenous Korean content. Indonesia is chipping in funding for twenty percent of the cost. While that buys Jakarta access to some of the technologies, Indonesia does not have the industrial base to contribute technologically to the KF-X program in a leading way..