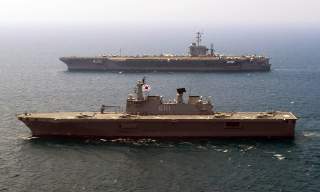 “I understand that the military top brass have recently discussed whether they can introduce a small number of F-35B fighters and operate them aboard the new ship that has already been deployed and one to be additionally built,” the report cited an unnamed military source as saying. The same source also told Yonhap, “As far as I know, the idea is being weighed in light of maximizing the strategic value of the vessel's capabilities.” Another source, who was not identified at all, was quoted as saying, “Considerations will continue about whether we can run F-35Bs by redesigning the decks of the Dokdo and the new ship that is being constructed.”

South Korea already has one Dokdo-class ship and is the process of building another one. The lead vessel was launched in 2005 and commissioned in 2007. At the time, South Korea intended to build three ships, but funding constraints caused Seoul to eventually cancel the third—and temporarily, the second one as well, but funding for that one was later restored. The ships displace fourteen thousand tons when empty, but up to eighteen thousand tons when fully equipped. Media reports say the ships can carry up to fifteen helicopters and roughly 720 marines.

South Korea is already part of the Joint Strike Fighter program, having decided to buy forty F-35A fighters in 2014 for a cost of $6.75 billion. However, that is the conventional version of the fighter jets. By contrast, the F-35Bs have the short takeoff and vertical landing (STOVL) capability that would be necessary to operate the planes from the Dokdo-class ships. Thus, if South Korea decided to move forward with the plan outlined in the Yonhap report, it would have to purchase F-35Bs, along with reconfiguring the amphibious assault ships to carry fixed-wing aircraft.

If all of this sounds familiar it is because Japan is reportedly considering the exact same thing. As I noted last week, numerous reports say that Japan is actively considering refitting its massive Izumo-class helicopter destroyers—of which it has two ships—to carry the F-35B.

Reconfiguring the Izumo-class destroyers to carry the F-35B, unnamed sources told Reuters—which first reported the story—would require “adding a curved ramp at the end of the flight deck, improving the deck’s heat resistance against jet burners, and reinforcing the ship's air traffic control capability.” The Yonhap article similarly noted that the Dokdo-class ships’ decks would have to be changed to handle the high heat of the F-35B. There is a major difference between the Izumo and Dokdo ships, though: size. As frequent National Interest contributor Robert Farley notes: “At 14,000 tons, the Dokdos are considerably smaller than the Izumos, and consequently not nearly as capable. Dokdo, first of the class, would have to undergo significant reconstruction in order to operate the F-35B, and even the second ship of the class (currently under construction) would require heavy revision.” This not a prohibitive deficiency—some light aircraft carriers are only slightly larger than the Dokdos. Still, Farley notes that if the Dokdos were converted into small aircraft carriers, they would probably lose their amphibious capabilities.

All of this raises an important question: why are countries like Japan and South Korea rushing to build pseudo–aircraft carriers, especially when it means sacrificing other important capabilities (as, inevitably, all defense spending does so long as resources are scarce)? After all, neither Japan nor South Korea are trying to acquire blue-water navies to project military power far distances from their shores. As I mentioned in the article about Japan, Tokyo sees having small aircraft carriers as necessary, in the likely event that China targets its land-based air bases at the beginning of the war. But, as Farley notes, having STOVL aircraft is useful in avoiding being wiped out on the ground in a surprise first strike, even if those planes are located on land.

The Yonhap article didn’t provide any particular reasoning for South Korea, but coming so soon after the reports about Japan, it is likely that prestige played a not-insignificant role. It is possible that prestige may also be a factor in Japan’s decisionmaking as well, since these reports are coming at the same time as China is rapidly moving to acquire its first domestically built carriers. Regardless, the irony is that as many in America question whether the aircraft carrier even has a future, countries across Asia—China, Russia, India, Japan and South Korea—are tripping over each other to acquire their own. It is not at all clear that strategic considerations are behind this mad dash, in many cases.