South Korea Must Be Ready for Unification for a Simple Reason 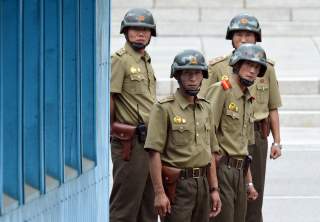 The Korean peninsula is currently the most dangerous flashpoint in the world. North Korea may now be capable of launching an intercontinental ballistic missile that can hit major US cities. It is highly unlikely to give up its nuclear weapons, despite harsh sanctions by the United States and the United Nations.

South Korea should prepare for a unification process, which could happen unexpectedly. No one expected the fall of the Berlin Wall and German reunification. And the costs of not being prepared could be high.

We analysed the economic impacts of Korean unification on North Korea, South Korea and the rest of the world under three hypothetical scenarios using a global dynamic model called G-Cubed. These scenarios are reform and gradual convergence in North Korea, North Korea’s sudden collapse and immediate unification, and chaos and crises in North and South Korea. Needless to say, there is no way to determine and quantify the exact outcomes of Korean unification. The simulations are potential scenarios rather than forecasts.

In the first scenario of reform and gradual convergence, North Korea is assumed to follow a development path similar to China in gradually implementing market-oriented economic reform and opening to the world economy. This optimistic scenario then incorporates Korean unification. It is assumed that there are fiscal transfers from South Korea to North Korea that are gradually increased by up to 1.5 per cent of South Korea’s GDP or 60 per cent of North Korea’s GDP per year.

This simulation found that with economic reform enabling fast productivity growth, North Korea can experience persistently high economic growth of between 10 to 20 per cent per year.

The second scenario assumes that North Korea collapses and there is immediate unification. There are larger fiscal transfers from South Korea to North Korea compared to the gradual convergence scenario. Migrants move from North to South Korea every year by as much as 0.5 per cent of the North Korean population or 0.25 per cent of South Korea’s population for 15 years. Because investment and productivity fall with the regime collapse, North Korea’s GDP falls almost 10 per cent initially but, as serious reforms are embarked upon, the economy can experience a double-digit GDP growth rate, as in the first scenario.

The third scenario assumes a chaotic situation in the Korean peninsula following the sudden collapse of North Korea and an unprepared, disorderly unification process. As international investors lose confidence in the capability of the South Korean government to manage the unification process, South Korea’s risk premium jumps sharply.

Reforms in North Korea are delayed. The more severe problems in the Korean peninsula lead to a large fall in GDP growth and persistently slow recovery with weaker investment in North Korea. As capital flows out from the Korean Peninsula, South Korea also experiences significant falls in investment, and its real GDP is estimated to fall more than 3 per cent in the initial year of crisis.

The simulation exercises demonstrate that Korean unification could have far-reaching economic consequences in the two Koreas. Currently North Korea remains the most isolated, centrally planned communist country in the world and its economy has been stagnant. But if North Korea adopts comprehensive market-oriented reform and opening, it will have an opportunity to display dynamism.

If South Korea helps reform the North Korean economy, it would inevitably suffer a drain in resources. But, as long as the unification process is gradual along an anticipated path, South Korea will have time to mitigate the adverse effects of unification.

On the other hand, there are potentially large costs if the process of unification is not handled well. The consequences of Korean unification, while important in economic terms, can also have far-reaching consequences for the political and strategic relationships among Asian nations as well as the international order.

Jong–Wha Lee is a Professor of economics and Director of the Asiatic Research Institute at Korea University, and president of the Korea International Economic Association.

Warwick McKibbin is the Director of the Centre for Applied Macroeconomic Analysis at Crawford School of PublicPolicy, The Australian National University.

This article is based on the working paper, ‘Modelling the Economic Impacts of Korean Unification’, which is available in full here. This research is funded by an ARC Grant DP150103821.