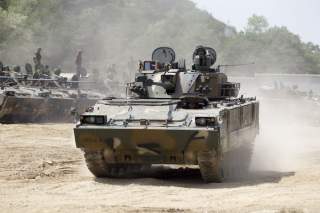 For several years, South Korea has been in the throes of a military weapons binge. In particular, Seoul really wants weapons made in South Korea. Officials have a mix of concerns regarding the evolving nature of the U.S.-Korean alliance, the unique needs of defending their mountainous country and the desire to bolster an indigenous arms industry.

It hasn’t always gone well. One of the first attempts to create a completely independent weapons system was an armored infantry fighting vehicle — known as the K200 — in the mold of an American M-113.

Like the M113, it was designed to give a tracked armored option to carrying a squad of troops. Also like the M-113, the K200 has a .50-caliber machine gun as its heaviest weapon … and it’s lightly armored and slow. Worse, North Korean BMP-1s would find them to be easy prey in the event of a war.

So, in 2003, Seoul awarded a $77 million contract for the development of a new IFV called the K21. It’s arguably one of the best in the world.

In many respects, the K21 is similar to modern NATO fighting vehicles like the Bradley, Warrior and the CV90. It has a three-man crew, an autocannon, tracks, anti-tank missiles and compliments for a modified squad of troopers in the rear.

But Seoul looked long and hard at existing IFVs, and South Korea’s battalion of BMP-3s received from Russia in the late ’90s during Project Brown Bear (where Soviet-era weapons were exchanged for debt forgiveness), and benchmarked all of them to come up with a platform that not only fit its needs, but could surpass other IFVs currently on the market.

The next generation Korean IFV — which became operational in 2009 — needed to be fully amphibious so to easily ford the numerous wide rivers that crisscrossed the peninsula, and it needed to have a high power-to-weight ratio to rapidly traverse the country’s ubiquitous hills and mountains.

Additionally, the new vehicle absolutely required enough armor to protect troops that, although still part of a conscript army, were drawn from an increasingly democratic and prosperous citizenry.

Seoul chose to arm it with a Bofors based (but domestically produced) 40-millimeter autocannon, which fires armor-piercing rounds that can punch through up to 220 millimeters of steel. That theoretically gives the K21 enough firepower to engage lighter tanks. The vehicle packs a standard 7.62-millimeter coaxial machine gun, and the commander has a mounted .50 cal.

The turret is stuffed with advanced fire control electronics and gun stabilization technologies contracted by Samsung Thales (a co-venture with Samsung and France’s Thales). The autocannon exceeds the Bradley’s rate of fire (200 versus 300 rounds per minute), and thanks to an autoloading carousel type configuration, 24 ready rounds can be reloaded quickly from a carousel at the bottom of the vehicle that stores 600 total rounds.

If this sounds rather similar to the carousel principle of a Soviet tank … that’s because it is. However, instead of loading one round at a time like in Soviet tanks, the K21 carousel loads its rounds in magazines of 24 in a self-contained cage, negating the safety issues that the Russian loading system was notorious for.

The manufacturer even claims that the fire control system is sophisticated enough to engage slow moving aerial targets such as helicopters. The K21 is armed with one twin ATGM launcher fitted with a Korean domestically produced equivalent to the Israeli Spike missile. The Spike is a fire and forget missile versus the optically wire-guided TOWs that equip Bradleys.

In terms of the powerplant, the K21 is propelled by a 740-horsepower V10 diesel engine, more capable than the 600-horsepower V8 engine in a Bradley. This gives the K21 a power-to-weight ratio of 29.2 horsepower per ton, whereas the latest A3 version of the Bradley has a lower ratio of 19.7.

And whereas the Bradley can only seat six people in its infantry carrier compartment, the K21 can seat eight with reasonable comfort — and nine uncomfortably.

On paper the K-21 is harder, better, faster and stronger with some impressive sounding technologies, armor and firepower. However, the K21 has several shortcomings.

Although it was claimed to be amphibious with minimal preparation, the high weight of the vehicle (nearly 26 tons with no fuel and ammo) makes buoyancy an issue, so two rubber pontoons had to be installed on the sides. These pontoons are self inflatable and hide just below the armored side skirts, and deploy automatically, but like all rubber parts of this size they are vulnerable to wear and battle damage.

Furthermore, even with fully functional pontoons, several K21s sank during exercises, resulting in at least one death. There are also reports that the powerplant has issues when tested to its maximum capabilities, showing more wear and a history of unreliably.

Doosan has promised to fix these flaws with successive versions, but it further highlights the issues of developing an advanced IFV, as the history of the Bradley was full of many teething problems with both the reliability of the powerplant and the impracticality of true amphibious capabilities.

Korea is finding out that weapons development is neither easy nor cheap.

Lastly, the K21 has so far failed to be the export success that South Korea had hoped it would be. Although at $3.5 million per unit it’s rather affordable compared to the Bradley and the CV90, it’s more than most prospective customers want to pay.

The developed world is opting to buy Swedish or American derived IFVs and M-113 derivatives, and the BMP family is still popular for most of the developing world. South Korea planned to recoup some of the development costs with overseas sales, but although there have been some lookie loos, there have so far been no takers.