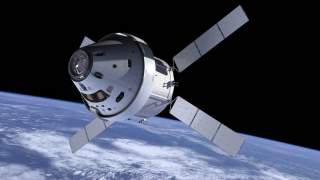 NASA's launch of the first test flight for the new Orion capsule occurred recently. The capsule is tipped as a possible vehicle for carrying US astronauts into deep space. Space fans are enthused, given the fact that America has been unable to launch astronauts since the Space Shuttles were retired in 2011. But all is not as it seems.

This is not a fully assembled Orion, but a simple test version. There won't be any flights with astronauts until around 2021 according to current plans. But even this is uncertain. Nobody knows what NASA will really do with Orion. There is no formally approved long-term mission, nor any guarantee of funding. NASA has been talking of flying astronauts to visit an asteroid captured by another robot spacecraft and towed to lunar orbit. But Washington still won't give NASA any real marching orders or material support for anything involving this new capsule.

Thus, Orion could be on a mission to nowhere.

The Orion controversy points to a deeper malaise within the US Government. Spaceflight is no longer a priority for the nation that put footprints on the Moon. Certain local politicians lobby for pork barrel projects for their districts, but space politics is a minor niche topic on Capitol Hill.

In the meantime, Asia is experiencing its own regional space race. India will soon do its own test flight of an astronaut capsule. China is preparing another space laboratory. Japan just launched a mission to scoop samples from an asteroid. The balance of power in spaceflight is clearly shifting east.