Space Is Truly the Final Frontier (For the Next Great War) 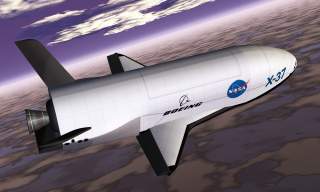 The weaponization of space is inevitable, but there’s still time to make it as peaceful as possible.

Those are the major conclusions that can be taken from a new study by Brian Chow published in Strategic Studies Quarterly, the strategic journal of the United States Air Force. Chow is formerly a senior physical scientist for twenty-five years at the RAND Corporation and described the inevitability of space weaponization in his article “Space Arms Control: A Hybrid Approach." He argues that this will be the result of spacecraft that can remove debris and service existing satellites. These dual-use spacecraft are necessary for peaceful space activities. However, they can be quickly refashioned for military purposes—with devastating consequences.

The first type of dual-use spacecraft—called active debris removal (ADR)—are designed to deal with the rapidly growing problem of space debris. One preliminary ADR example came from China in June 2016 when it launched the "Aolong-1" spacecraft, which was a demonstrator device. These ADR spacecraft—which are also being developed by the United States, European Union, and Russia— can retrieve debris floating in space. Then, the ADR spacecraft bring the debris down to re-enter the atmosphere, destroying it by the intense frictional heat. Alternatively, they can also instead place the debris in graveyard orbits to reduce the probability of colliding with operational satellites.

ADR spacecraft are unavoidable given the growing nature of the space debris problem. Previous estimates have suggested that starting in 2020 the world would need to remove an average of five massive objects (such as decommissioned satellites and derelict rockets) from low earth orbit (LEO) each year to deal with the problem. Others have estimated that the number is closer to ten that will need removal. However, as Chow points out, these estimates fail to consider the massive expansion in the number of LEO satellites entering space. As of August 31, 2017, only 1,071 LEO satellites were orbiting the earth. Over the next decade, however, between 14,000 and 16,000 additional LEOs are expected to be launched. This makes the space debris problem more difficult, and debris removal spacecraft that much more important.

The problem is that the same spacecraft that can remove debris can also be used as “space stalkers.” Space stalkers, as Chow previously described them, "could be placed on orbit in peacetime and maneuvered to tailgate U.S. satellites during a crisis. At a moment's notice, they could simultaneously attack multiple critical satellites from such close proximity that the United States would not have time to prevent damage." Since ADR spacecraft are designed to get close to and remove debris, they necessarily have the capability to get close to and snatch essential satellites that U.S. military relies on.

Additionally, ADR spacecraft are not the only dual-use problem. Many of the same countries developing ADR capabilities are also building maintenance spacecraft. These spacecraft—called on-orbit servicing (OOS)—also maneuver themselves to be in physical contact with satellites to perform any number of maintenance tasks. These tasks include, "high-resolution inspection; correction of some types of mechanical anomalies, such as solar array and antenna deployment malfunctions; relocation and other orbital maneuvers; installation of attachable payloads to enable upgrades or new capabilities; and refueling to extend the service life of satellites."

Once again, the issue is that these OOS spacecraft can be quickly repurposed to take out critical satellites during a crisis or conflict. In fact, these OOS spacecraft are even better space stalkers than ADR ones because they have more advanced rendezvous and robotic capabilities.

This is not some distant problem. Chow notes that the first ADR and OOS spacecraft are likely to become operational sometime in the early part of the next decade. “In effect,” he writes, “weaponization of space will happen by default in the early 2020s and beyond and will be unavoidable and irreversible.” It will only grow worse with time as more countries launch ADR and OOS spacecraft and their capabilities for rendezvous and proximity operations improve.

The current space control treaty is unable to deal with this emerging threat. This treaty prohibits parties from placing weapons of mass destruction into orbit, which is important but does not deal with the growing conventional threat. Even the different proposals being floated by countries like China and Russia are unable to deal with the space stalker problem because it comes from dual-use spacecraft. A distinction between ADR and OOS spacecraft on the one hand, and space weapons on the other, cannot be made. Moreover, a ban on ADR and OOS spacecraft is not feasible.

So how can the world proceed? Chow proposes a hybrid space treaty that takes the best from previous approaches and updates it to deal with the dual-use challenge. To deal with the latter, Chow argues that "space stalkers can be controlled by prohibiting them from being simultaneously placed too close to and threatening another country's satellites." An example would be that countries agree not to place any satellite within a certain distance (0.2 degrees in longitude or inclination, for instance) to another country's geosynchronous Earth orbit (GEO) satellites. If a country did move too many satellites too close, "the defender would also have the right to exercise self-defense as a last resort even before an actual attack." This would require recognizing the right to preemptive self-defense in space. In a SpaceNews commentary, Chow points out that President Trump’s America First National Space Strategy unveiled on March 23 declares a new self-defense doctrine, which is based on “counter threats” and is different from those of the Obama administration and its predecessors. Chow observes that “countering threats means we have the right to exercise self-defense when the threat is imminent but before the attack has occurred.” Most importantly, preemptive self-defense proposed by Chow almost three years ago is consistent with Trump’s new doctrine, emphasizing the timeliness and relevance of considering Chow’s analyses and recommendations.

Finally, the benefits of this hybrid approach are that it allows for verification (simply by verifying where the satellites are positioned) while allowing for ADR and OOS spacecraft to perform their important peacetime missions (although Chow is also in favor of agreeing on limits to the number of ADR and OOS spacecraft in orbit at any given time). Chow also believes, given their current plans for space operations and goals of space arms control, this hybrid approach could get buy-in from China, Russia, and the United States. However, if Moscow and Beijing refused to go along, the United States would have “no choice but to switch to unilateral space arms control measures to ensure space security and stability.”

In sum, Chow should be commended not only for identifying an underappreciated but immensely important challenge. He also takes the much rarer step of proposing a sensible solution. Space planners can use his new study as a point of departure in meeting this urgent challenge of keeping peace in an increasingly weaponized space.