Spend Like America to Get a Next Gen Navy in Australia 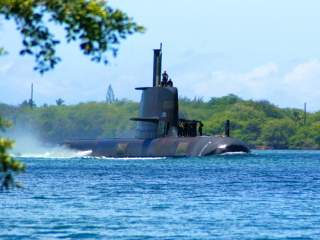 With the Australian government confirming that it has received three proposals under the future submarine competitive evaluation process (CEP) it’s worth considering where we’re headed. There’s a consensus emerging among analysts and commentators that the CEP might be a useful vehicle for selecting a strategic partner, but it isn’t a process for making a well-informed commercial selection. In fact it’s neither, but the government nevertheless seems to be rushing ahead.

A big problem is that sooner or later everything has to be reduced to a contract. It’s been a long time since the Australian Department of Defence has had to negotiate anything really large and complex—once the messy Air Warfare Destroyer alliance is removed from the mix—and it could be that memories are fading about why it’s essential to get that part of the procurement process correct. It’s obviously important for the ADF and the Australian taxpayer to have a high level of confidence that what they’ll be getting in exchange for a great deal of money is a product or system that largely approximates to what’s required. But it’s equally important for the supplier to also have the clearest possible understanding of what needs to be delivered.

Even a developmental program such as the F-35 is run as a series of annual contracts that specifically define what will be built in what numbers, what needs to be tested and what needs to be modified—all for a precise dollar value. On the other hand, the CEP seems to be about a methodology rather than a product, and lacks a budget. At least when we attach ourselves to the U.S. procurement system via the frequent use of FMS purchases, we mightn’t always know what the exact price will be—but we can at least be certain that it will be for the same amount of money that the Pentagon itself is paying (with an administrative overhead).

Unfortunately much of the CEP is secret and we only have some general information about what is being sought, such as data on construction location choices and the knowledge that a lot of work is being undertaken on pre-concept designs. It’s amazing to think that six years after the last White Paper announced Australia would be getting twelve new submarines and hundreds of millions of dollars spent on consultancies, Australia’s navy hasn’t even been able to get itself to the starting point of a conceptual design.

If Defence plans to sign a production contract three years after selecting a preferred designer, they leave themselves open to enormous risks. Put simply, without commercial leverage the Commonwealth will either have to pay whatever the designer wants—or start the entire process again. The department argues that the CEP allows them to understand how the bidders formulate their prices—but this doesn’t guarantee price control at the end of the day. Far from it.

There does not seem to be any safeguards that can be built into a source selection decision at this early stage that will prevent future price hikes occurring. The only way to protect against those sorts of possibilities is to have at least two bidders to choose from and maintain competitive pressure for as long as possible.

The Commonwealth also seems to believe that having a close relationship with the three parent navies and their governments will mean that it isn’t ultimately ripped off. There are credible reports that the government of Japan is already leaning on Mitsubishi not to add in too much profit. But Japanese companies are just as determined as their counterparts in Europe and the United States to make money and pay shareholders. Presumably the management and board of Mitsubishi will be asking why they should build submarines for Australia any less profitably than they build them for the government of Japan.

Australia developed a good relationship with Sweden on the back of the Collins program and for a while the two countries seemed quite close with the exchange of operational information and technical knowledge. Then Australia blew it. It all started to unravel in 1996 when a RAN officer leaked highly classified noise trials data to the Daily Telegraph specifically designed to damage the Collins program—which senior Swedish naval staff and politicians took to be a deliberate smear.

That was soon followed by other unfortunate developments such as RAN sending submarine propellers to the United States for testing without even telling the Swedes what was happening. The final insult was kicking the submarine designer Kockums/Celsius out as an ASC shareholder in the year 2000. And some of our brightest bureaucrats were subsequently offended when Stockholm didn’t fall all over itself in the rush to give Australia extraordinarily sensitive Swedish submarine IP.

If you get the contract right, the strategic relationship will follow because Australia will automatically have the opportunity to link up with the parent navy of whatever country is chosen and will also be developing substantial industry linkages into the bargain. The problem with the CEP is that it’s designed to make a choice of supplier now, thus eliminating competitive pressure even before a design has been developed, let alone finalized.

At least with Malcolm Turnbull at the helm there’s some hope that a sane, rational decision will be taken. What should happen is that the CEP offers now be used as the basis of a submission to Cabinet for First Pass Approval to acquire new submarines. Once that box has been ticked the Department should issue a Request For Tender document to two or three bidders—and make them compete for a contract.

The only way that the current methodology makes any sense is that if Defence plans to end the competitive selection process for naval projects and enters into a series of long-term sole source contracts, as takes place in a number of countries including Britain, Sweden, Spain, Germany, Japan and the United States.

This would constitute a radical overhaul of the entire procurement system and is dependent on an extremely strong local industry base that Australia unfortunately doesn’t have. In all of these cases, governments are contracting with their own industry—Britain with BAE Systems, Sweden with Saab, the United States with Electric Boat and so on. This means that both parties—government and local industry—have a mutual interest in negotiating reasonable contracts because they’re interdependent.

The same logic won’t apply if Australia sought to enter into such an arrangement with an overseas company, which could simply pull out of Australia if conditions weren’t sufficiently favorable. But if the Government is going in this direction they should make it really commercially attractive and add SEA 5000 plus SEA 1180 to the mix. Both the French and German bidders make excellent surface ships; the Japanese only slightly less so. Just think of the package deal that could be done if Defence competed not only the future submarine but most of the surface fleet as well.

Kym Bergmann is the editor of Asia Pacific Defence Reporter and Defence Review Asia. This article first appeared in ASPI's the Strategist.