'Star Wars' Missile Defense Is Back—but Will It Work? 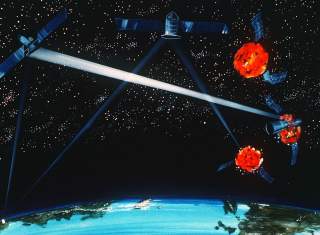 For those who remember President Ronald Reagan’s Strategic Defense Initiative (SDI) of almost four decades ago, it sounds like déjà vu all over again. Reagan pitched building an ambitious anti-missile system in 1983 dubbed “Star Wars.” The R&D effort, which included space-based lasers, was sidetracked by funding shortfalls and the collapse of the Soviet Union. But it appears to have gained a new lease on life.

A conga line of generals and officials told Congress in late March that the US lags in defending itself against game-changing weapons such as Russian and Chinese hypersonic missiles. The testimony, aimed at securing more military R&D funding, follows a March 1 speech by Vladimir Putin in which the Russian president unveiled new ballistic and hypersonic cruise missiles that supposedly evade US anti-missile shields.

“No anti-missile system – even in the future – has a hope of getting in its way,” Putin said of a new intercontinental ballistic missile (ICBM) codenamed Sarmat that has maneuverable re-entry vehicles or MARV warheads.

Return of the Jedi

The alarm bells raised by Putin’s claims are pushing Washington to resurrect some of the space-based missile shields championed by Reagan. But several analysts, including Angelo Codevilla, one of the original architects of Reagan’s SDI, caution that nearly all the wonder weapons touted three decades ago never reached the experimental stage due to inadequate funding and political commitment from US officials. Most must be developed from scratch.

Codevilla says an example is a nuclear-pumped X-ray laser proposed for Stars Wars by US atomic scientist Edward Teller. “Not only did it not get to first base, it never made it out of the dugout,” he told Asia Times.

Based on current technology, Codevilla says the US also has little defense against low-flying hypersonic cruise missiles fired by Russia or China.

Others note new vulnerabilities for any revamped Star Wars system. These include cyber links that can be hacked and anti-satellite weapons that can “blind” US missile shields. There also are nagging worries about the reliability of such anti-missile defenses, their huge costs and the destabilizing impact they’ll likely have on existing arms control pacts.

“It’s a good way to spend a lot of money with not much to show for it,” John E. Pike, a military intelligence analyst who runs website globalsecurity.org, told Asia Times. “Large-scale missile defense against a determined peer adversary like Russia or China still poses the arms race and crisis instability problems that are inherent in such technology.”

A recent report from Chatham House, a London-based think tank, noted that new technology in the form of chips and other digital components has created “new threat vectors” for US missile defenses and nuke weapons systems. The dangers include the use of foreign-made digital components in such systems that makes them liable to cyber infiltration.

Russia and China can also be expected to wield anti-satellite weapons to bring down new Star Wars defenses. And some doubt if current US anti-missile technology, which requires “hitting a bullet with a bullet,” will work against hundreds or thousands of incoming warheads.

Codevilla is a former Navy officer and staff member of the Senate Select Committee on Intelligence who conceived many of SDI’s technology programs in the 1980s.

He notes that only two potential anti-missile systems: space-based lasers that hit missiles and orbital optical systems that detect ground launches, can counter a growing threat from Russian and Chinese ICBMs. But he emphasizes that both systems must be used to detect and destroy ICBMs in the boost phase – before multiple nuke warheads separate from their rockets – to be effective.

Lasers, according to Codevilla, wouldn’t be able to destroy the MARV warheads alluded to by Putin. But clear shots could be made from space at the boosters carrying the warheads without interference from the earth’s atmosphere.

Codevilla says a space-based chemical laser weapon with a mirror relay was the only Star Wars system that neared the testing stage. It was described in a December 4, 1994, New York Times article titled “Space-based laser nearly ready to fly.” A scaled-down, land version of the laser is said to have shot down Katyusha rockets over Israel.

“The technology for space-based lasers has improved dramatically in the past 30 years,” Codevilla said, noting that they are cheaper, easier to manufacture and lighter.

Another viable Star Wars-era system, according to Codevilla, is an orbiting, non-radar optical sensor satellite that can “see” enemy missiles from space regardless of where they’re fired from. The so-called SBIRS-Low system was designed to detect Soviet ICBMs on launch and to relay firing solutions to ground-based interceptors.

He says the technology, which was in the engineering stage, was mothballed because it violated the US-USSR 1972 Anti-Ballistic Missile Treaty’s ban on systems that “substitute for” ground-based radars. The system wasn’t revived even though the US abrogated the treaty.

Codevilla cautions that other next-generation anti-missile systems are problematic. Space-based neutral particle beams, for instance, would require huge generators to power them in orbit.

Lasers mounted on Boeing 747 jets or drones would have to correct for atmospheric distortion in order to bring down enemy missiles soon after launch. “Lasers are notoriously ineffective in the atmosphere,” Codevilla pointed out.

Hypersonic missiles, Codevilla says, are an even tougher nut to crack since these air-breathing weapons fly close to the ground at phenomenal speeds, making space-based interception nearly impossible.

Plane or ground-based lasers, he says, also wouldn’t work against hypersonic missiles, especially over water, due to the light distortion caused by the ocean’s humidity. It’s also unclear if railguns or other hypervelocity weapons can be developed to bring them down. “The only thing you can do with a hypersonic missile is hit the launch pad,” Codevilla says, referring to airstrikes and ground-to-ground missiles.

Codevilla worries that the policy and funding problems which dogged Star Wars will resurface if it’s revived by the Trump administration.

“Star Wars is back, but in the worst possible way, in the form of a lot of research projects that aren’t actual (weapons) engineering projects,” Codevilla said.

“Policy is the problem, not technology. Space-based missile defense and anti-satellite warfare has been possible since the 1960s with ever-increasing sophistication. Problem is, the US government has sought every means of avoiding the fact that this is so. In that regard, absolutely nothing has changed,” Codevilla added.

Current US antimissile interceptors based in Alaska and California, Codevilla says, are thoroughly inadequate in dealing with the new threat from Moscow and Beijing. He asserts the US abandoned efforts to develop a serious anti-missile defense from the 1990s in order to sign arms control pacts with Russia. He argues this left the US virtually defenseless against Russian and Chinese missiles – a situation that continues to this day.

Pike takes another view. He says the biggest argument against reviving Star Wars is the fact that Russia, China and the US, despite differences, aren’t one step from Armageddon – as was the case during the Cold War.

“No one is lying awake at night worrying about Soviet tank columns driving to the Pyrenees,” Pike said.