Stealth and Speed: America's SR-71 Blackbird Might Be Old (But Still the World's Fastest Plane) 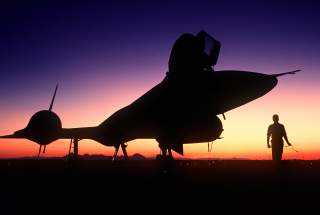 The Blackbird’s design reflected the fact that it was pushing the limits. The crew wore pressure suits like those used on space missions to withstand the high altitudes they were flying at, and were treated to a medical exam and a high-protein steak and egg meals before each mission. The SR-71’s J58 engines could only start through use of two vehicle-mounted V8 starter engines, and the triethylborane used in the fuel would belch green flames during ignition. The J58s would switch to a partial ramjet mode at high speeds, such that the SR-71 actually became more fuel efficient when it went faster.