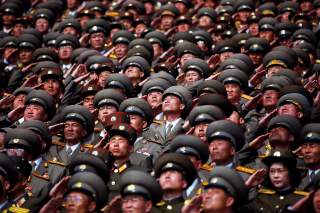 The recent news about the upcoming summit between President Donald Trump and Kim Jong-un on June 12 in Singapore is exciting and encouraging. It would not have seemed remotely possible a year ago—or even six months ago. Back then, war seemed much more likely. It is impossible to know whether the decision to hold a summit is primarily due to Kim’s newfound confidence in his missile and nuclear capabilities, or his fear of Trump’s military threats, or a result of the pain his country has endured from UN-imposed economic sanctions, which have cut North Korea’s external trade in half. Perhaps the charm offensives that Kim, Trump, President Moon, and Secretary Pompeo have been showering on one another led to the summit. In truth, it is probably some combination of most of those factors.

The summit could still wind up being a bad idea if it fails miserably, or if President Trump somehow accepts a poor deal. But on balance, there is a real potential for success. That is especially true if the United States goes into the summit with its eyes wide open. Aiming for near-term complete denuclearization of North Korea is fine. But the odds of achieving such a goal anytime soon are probably in the single digit percentages. North Koreans view the program as a key legacy of Kim’s father and grandfather, and thus a national crown jewel. Kim sees his arsenal as an essential insurance policy against suffering the fate of Saddam Hussein, Muammar el-Qaddafi, and the Taliban leadership in Afghanistan in 2001. None of these bad actors had a nuclear bomb, and none of them survived war with America. To change this position, Kim will need a lot of convincing and a wide array of incentives and reassurances that will likely take some time to implement. By contrast, the odds of a step-by-step process that would cap North Korean capabilities and perhaps eventually lead to nuclear disarmament seem much better—though here the risk is that the United States will wind up with deals that North Korea soon violates or exploits, as in 1994 and 2007. Thus, outside analysts and government experts should focus much of their time between now and June 12 on what kinds of reciprocal steps the various parties could take that would lead to a successful negotiation and meaningful, even if only gradual, denuclearization.

I would propose that denuclearization can be largely reduced to four main steps. Ideally similar steps would be applied to longer-range missile and chemical weapons stocks as well, though they are a somewhat lower priority.

- FREEZE TESTING. A freeze on the testing and production of nuclear weapons, and of longer-range missiles as well, as Pyongyang has already done this year.

- CAP ARSENALS. Verifiable termination of production of highly enriched uranium and plutonium (I would term this the “cap” phase to distinguish from the existing freeze on testing, since this caps the size of the arsenal).

Thus, the U.S. goal of permanent, verifiable, irreversible disarmament or “PVID” can be achieved all in one fell swoop—if The United States is very lucky. Or it can happen through the “FCDD” process of freeze, cap, dismantle and disarm. The first step has already been temporarily achieved by unilateral North Korean declaration, perhaps partly because the country’s existing nuclear test site was badly damaged by North Korea’s large test last fall. We need to codify that decision and follow it up with more. President Trump is right to hope for the whole enchilada through a single deal. But he would have made a major contribution to world peace if he can achieve even the first three steps listed above—FCD—while leaving the ultimate elimination of North Korea’s existing warhead arsenal until later. And even if Trump can somehow negotiate complete disarmament, it will likely play out in something like the four stages noted above.

That leads to a very important question: to make the process work, what kinds of inducements should the United State offer North Korea at each stage of a disarmament process? Believing that North Korea will wait until the process is complete for any reward whatsoever is unrealistic and will almost surely condemn the negotiations to failure. But giving up too much too soon could incentive Kim to agree to a deal that he has no intention of fully carrying out—pocketing whatever concessions he can get early and then ignoring the accord later.

I would propose the following framework for each stage of the process:

Freeze. This is the stage we are now in, of course, so no radical steps are needed to achieve it in the short term, but the positive atmospherics around the summit are smart and should continue. Some have criticized President Trump for being too complimentary about Kim. This is a valid point, given Kim’s human-rights record, and given the importance of not encouraging other countries to ease up on sanctions enforcement. But Trump is right that it is still better to err on the side of staying positive at this stage.

Cap. A verifiable cessation to the production of fissile material needed in a nuclear bomb would be a huge step. To achieve it, North Korea would have to shut down existing nuclear activities, provide a database of existing production sites to international inspectors, and allow those inspectors to visit the sites as well as “suspect sites” in other parts of the country. It could shroud and shield areas of each major military facility so that inspectors would not be able to find actual warhead stocks, but otherwise it would be giving up information on the regime’s most prized possessions to the international community. At the same time, however, it would not be permanently disabling or dismantling these sites, so the incentives offered to it should be temporarily and reversible as well—the suspension of certain sanctions rather than their elimination, and the provision of just humanitarian aid rather than wide-ranging economic aid.

Dismantle. At this stage, while North Korea would be keeping its warheads (presumably), it would be giving up huge investments worth many hundreds of millions of dollars that would take years to rebuild. As such, more significant quid pro quos would be appropriate.

Ryan Hass and I recently outlined some basic principles that could be useful in such an effort. We argued for making a clear distinction between UN sanctions, most imposed in recent years, and U.S. sanctions, many of them resulting from the early decades after the Korean War of 1950–53 before North Korea even had the bomb. The majority of U.S. sanctions should stay in place until nuclear disarmament really begins to happen—until the final phase of the process, discussed below.

However, UN sanctions are a different matter. Starting with Resolution 1718 of 2006 and continuing through Resolution 2371 of August 2017, as well as the Resolution 2397 of December 2017, they have gradually turned up the pressure on North Korea. Some focused on trade in technologies relevant to weapons of mass destruction and ballistic missiles (e.g., UNSCR 2087 of January 2013); they were subsequently broadened to encompass weaponry in general (such as UNSCR 2270 of March 2016). More recently, they have begun to target commercial sources of revenue for the North Korean regime as well as the assets of individuals and companies from North Korea or those doing business with North Korea (2270 plus 2371 and 2397). These sanctions hurt the regime most because they have affected economic engagement with the key countries—China, Russia, South Korea, Vietnam, others—on which North Korea currently depends. Suspending some and then lifting most as dismantlement is completed makes sense.

Disarm. At this stage, U.S. sanctions could be lifted as warheads were shipped out of North Korea. These U.S. sanctions are codified in agreements and laws such as the Foreign Assistance Act of 1961, the Trade Act of 1974, the Arms Export Control Act of 1976, the Export Administration Act of 1979, the Trafficking Victims Protection Act of 2000, and the Iran, North Korea, and Syria Nonproliferation Act of 2000, so the laws would have to be changed. Of course, there is virtually no trade between the United States and North Korea today. But such lifting of sanctions would still be important because it would make possible major loans and grants from the World Bank and the U.S. Agency for International Development, among other bodies. The spigot for such aid should not be fully opened all at once, even after nuclear disarmament. North Korea should be expected to make economic reforms, reduction in its enormous conventional military capabilities, and elimination of other weapons of mass destruction to qualify for the international community’s full largesse. A human-rights dialogue should also be initiated by this stage. But significant aid would begin once the warheads and any additional stocks of highly enriched uranium or plutonium were turned over to international control.