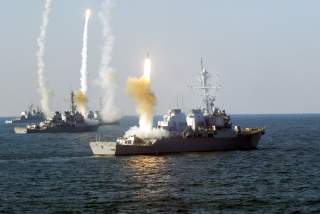 US Secretary of Defense James Mattis spent the tail end of last week in Seoul and Tokyo conferring with allies about the extreme challenge posed by a belligerently nuclear North Korea. When he gets back, Secretary Mattis should provide President Donald Trump with an option to straitjacket the rogue regime with consistently stiff military restraints to enable diplomacy. Pin down their arms and North Korea’s only option will be to talk.

North Korea is a uniquely vexing challenge with a rapidly closing solution window. Adm. Harry Harris, commander of US Pacific Command, calls them his “most volatile and dangerous threat” because their violent mood swings endanger a key ally in South Korea, 25 million people in Seoul, and periodically hold hostage the critical economies of Northeast Asia. The so-called Doomsday Clock recently edged closer to midnight than any time since the unstable dawn of the nuclear age, an acknowledgement of today’s near-term nuclear risk, thanks in part to North Korea’s reckless behavior. And a recent high-level defector says subversive information is “crumbling” North Korea and the regime’s days are “numbered”; oppositely, widely-reported intelligence tells us North Korea will be capable of striking the U.S. homeland with a long-range nuclear missile by 2020.

While this assessment is a personal view and does not necessarily reflect the policy of the Department of Defense or any government agency—I’ve just returned from service near the Demilitarized Zone for a year through crisis tensions and nuclear tests, and so have a deep sense for the urgency this international problem presents. I learned American interests in South Korea are many and varied, but with respect to North Korea’s nuclear program they are specific and simple: North Korea must cease to possess this dangerously destabilizing capability. The two sides are locked in a mutually-damaging stalemate that will inevitably come to an unacceptable result for one or all parties—either information will cause North Korea to fall from within, or North Korea will employ weapons of mass destruction to lash out at American and South Korean troops, civilians, or the nearby Japanese islands. Unfortunately, military options to remove this threat are, at best, likely to be intensely difficult and immensely damaging. And 2020 appears to be our line in the uranium-tinged sand.

What is to be done? First, there should be a South Korean and U.S.-driven push to bring other imperiled and implicated countries unhappy with the status quo into common agreement to put diplomacy first. Commit to talking, but at the same time, agree to follow through with a pre-announced, internationally-backed set of tailored consequences for North Korean provocations, designed to keep North Korea engaged in constructive progress toward a diplomatic agreement consistent with U.S. interests and alliance terms. Military force’s main purpose would be to enhance diplomacy; every military action designed to deter or deny North Korean efforts to disrupt such talks (emplacing the Thaad missile defense system is a good start). Fight fire with water. They rattle the saber; we rap the shield. Not to conquer, but to contain.

Because this course would spell out consequences ahead of time, it has risks. We’d give up some advantage by tipping our hand, yet, would still retain surprise as to reprisal time and place, as well as gain greater assurance that our actions will not be misinterpreted. Not every participating nation would view North Korean acts of provocation the same way, and will likely disagree on response. If well crafted, though, such an international coalition could find work arounds, and the basic calculation to put faith in coalition cohesion would ultimately be rewarded should deterrence and diplomacy fail as we’d have “failed forward” and pre-built the necessary legitimacy and structure prepared for the rigors of a bloody, high-stakes war.

What’s the likelihood of such an approach? There are reasons to be skeptical, as President Trump seems to relish his ability to play his cards close and decide at the very last moment. Moreover, the recent political scandal and presidential impeachment in South Korea suggests significant diplomatic breakthroughs are doubtful in the short run.

However, the next South Korean president may equally have a lower bar and wider political latitude to seek an agreement (particularly with the recently departed UN chief available to be pressed into service). Also, for the US, if action against ISIS is the priority, then containment in Korea makes sense. Guiding the weight of many powerful regional actors could reinvigorate American leadership in the Asia-Pacific; North Korea is an enemy that can unite many divergent countries and domestic constituencies (notably as the one adversary that unites American Democrats, Republicans, and Independents). And President Trump clearly values the deal—perhaps he would relish the opportunity to wield the big stick to cut what could be the biggest deal, ever, by talking North Korea out of their nukes.

An earlier Korean contingency provides helpful context. One week into the Korean War, on July 2, 1950, General Douglas MacArthur’s bleak assessment to Washington was urgently dramatic: “I can almost hear the ticking of the second hand of destiny. We must act now or we will die.”

Today, another general advising Washington would do well to again encourage timely action in Korea—this time, the presence of nuclear weapons counsels’ different demands: diplomacy first, enabled by a strict, sharp, made-to-measure straitjacket to hold North Korea to account for as long as talking takes.

Major ML Cavanaugh is a US Army Strategist, a Non Resident Fellow with the Modern War Institute at West Point, and looks forward to connecting via Twitter @MLCavanaugh.