Strange Fact: This U.S. Ally Could Be Defeated in Battle by American-Made Weapons 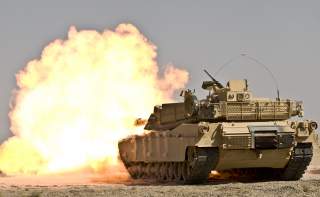 Neither Iraq, Iran nor Turkey are happy that Iraqi’s semi-autonomous Kurdish region went ahead with its referendum on independence last month. They responded by threatening economic sanctions, along with other punitive measures, and flexing their military muscles by conducting exercises on Iraqi Kurdistan’s doorstep. These exercises serve as a striking reminder of the significant amounts of American-made hardware in all these countries’ inventories.

The Iraqi military — which is wrapping up its war with Islamic State following the removal of the militants from their last significant stronghold, Hawija in Kirkuk province — has coordinated military exercises with both Iran and Turkey since the Kurdish referendum.

The central Iraqi government has effectively closed the airspace over Iraqi Kurdistan and seeks to take full control over the region’s border posts — which it may well get, but only on the Iranian and Turkish sides of these frontiers.

Even though the Iraqi parliament called upon Iraqi Prime Minister Haider Al Abadi to send the army into the city of Kirkuk — controlled by the Kurds since June 2014 — to forcibly take control over the oil fields there, this hasn’t transpired … at least not yet. The Peshmerga are garrisoned in Kirkuk, a city of vast importance to Kurdish nationalists, and are unlikely to relinquish control over it without a fight.

Were there a war, Iraq could use its U.S.-built F-16 Fighting Falcons — delivered in September 2015 — to forcibly keep Kurdish airspace sealed off and to bomb the region. Baghdad would also have the choice of targeting the Kurds with its Russian-built Mi-28 and Mi-35 gunships, along with some Su-25 Frogfoot attack planes.

Iraq’s large armored forces of U.S.-built M-1 Abrams tanks would likely spearhead any ground assault backed up by a fleet of Russian-built T-72s. Last year, when pushing Islamic State from the disused Qayyarah Airbase, the Iraqi military carried out its largest armored assault since the invasion of Kuwait in August 1990.

However, Baghdad cannot count on the United States to resupply spare parts for the F-16s and Abrams tanks if they are being used to kill Kurds.

Turkey also conducted a sizable exercise scheduled before the referendum which saw approximately 100 tanks operating near the border. Turkey relies heavily on a large fleet of older American-built M-60 tanks for ground operations, evidenced by the Euphrates Shield campaign against Islamic State and Kurdish fighters between August 2016 and March 2017. This has proven problematic since these older tanks are more vulnerable to modern anti-tank weapons.

Turkish military analyst Metin Gurcan assessed that were Turkey to take military action in Iraqi Kurdistan, it will rely heavily on air support, having learned from Euphrates Shield how heavy a price ground forces pay when they don’t have reliable air cover and the capability to conduct “missions to evacuate wounded troops and provide logistical support.”

Turkey’s enormous fleet of F-16s, the backbone of that country’s air force, would doubtlessly execute any bombing campaign in Kurdistan, as they frequently do in their intermittent air strikes against Kurdistan Workers’ Party militants ensconced in Iraq’s Kurdistan’s Qandil Mountain.

The array of hardware Iran recently sent to Kurdistan’s border is noteworthy. Aside from the calamitous Iran-Contra affair in the 1980s, the United States has not supplied Iran with arms since the 1979 revolution. Nevertheless, the Iranian arsenal still operates a variety of American tech it inherited from the Shah’s military.

Iran’s domestically-produced Zulfiqar tanks, and the newer Sabalans, are partially based on Iranian M-47s and M-60s. These tanks were present at the exercise on Kurdistan’s border. Overhead during the same exerciseflew helicopters from Iran’s fleet of U.S.-built Bell AH-1 SuperCobra attack helicopters and Bell 214 transport helicopters.

Iranian F-5 Freedom Fighter IIs were also spotted flying near Iraqi Kurdistan’s border on Sept. 24, the day before the referendum.

Were Iran to attack the region, Iranian F-4 Phantom IIs and F-5s would likely carry out much of the bombing. When Islamic State came near the Iranian border in Iraq’s Diyala province briefly in December 2014, Iranian F-4s flew over that border and bombed them.

While Ankara, Baghdad and Tehran are presently very angry with Erbil over last month’s vote they are unlikely to actually invade the region. This would run against their own basic interests in several ways, from effectively destroying a market they are invested in to risking a backlash which could well see Kurds in their countries, and Syria, come to the defense of the Iraqi Kurds, significantly destabilizing the wider region.

Iraqi Kurds have been an American ally for nearly two decades now, and the Peshmerga fought alongside U.S. troops during the Iraq War and were an important ground ally in the war against Islamic State. But since Iraqi Kurdistan remains legally a part of Iraq it cannot buy and import heavy American, or any other, weapons independently.

Instead, they pretty much have to make do with some old artillery guns and T-55/62 tanks seized from the Saddam-era Iraqi Army arsenal, along with some mine-resistant ambush protected (MRAP) vehicles and Humvees provided by the U.S.-led coalition during the most recent war.

The combined military strength of these neighboring countries could decimate the Kurdish Peshmerga in a conventional confrontation and occupy Iraqi Kurdistan’s major cities. But the drills should be understood as a way for the Kurdish enclave’s neighbors to display their military strength as a means of intimidating and deterring it from pushing ahead with secession.

Iraqi Kurdistan’s strategic location has always been paradoxical. It is relatively vulnerable and thus easy to overrun, given its aforementioned lack of heavy weaponry, but at the same time almost impossible to conquer due to its mountainous — almost Afghanistan-like — geography and the demonstrated determination of its people to fight to the death in defense of their homeland.