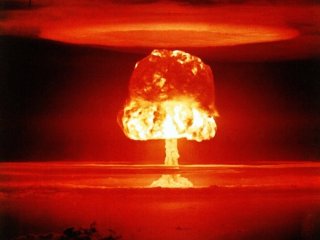 Speaking in Washington, D.C. last week, former Secretary of Defense William Perry said the United States could retire its intercontinental ballistic missile leg of the so-called nuclear triad and still retain a credible second strike capability with the remaining two legs—its bombers and submarines. In fact, we are already seeing evidence that it is unnecessary for the United States and Russia to maintain numerical parity in their nuclear warhead inventories for the United States to be secure.

According to the latest exchange of New Strategic Arms Reduction Treaty (New START) date, Russia now deploys 254 more nuclear warheads than the United States, which is more than sixty percent of the warheads currently carried by the entire intercontinental ballistic missile (ICBM) leg of the U.S. nuclear triad. Russia has enough extra firepower to cast the world into a nuclear winter that kills more than a billion people, but guess what? No one in the U.S. government or Pentagon is losing much sleep.

The big lesson of this latest exchange of New START data is that it is unnecessary for the U.S. nuclear arsenal to remain “second to none” in order to provide sufficient deterrence and strategic stability in the U.S.-Russia relationship.  In fact, the U.S. Department of Defense concluded in 2012, and reaffirmed in 2013, that strict numerical parity with Russian warheads is unnecessary.  In other words, we can ensure the security of the United States and our allies at a reduced level of 1,000-1,100 deployed warheads even if Russia stays at the 1,550 required under the New START.

The next U.S. president will have the opportunity to decide the level of investment needed to modernize U.S. nuclear forces and it is vitally important that they keep in mind that numerical parity shouldn’t be the determining factor.

Many experts believe that the United States cannot afford to simultaneously replace the entire nuclear triad and maintain the quality and effectiveness of our conventional military forces over the next twenty to twenty-five years.  Trade-offs must be made. What the latest New START data and previous Pentagon analysis tells us is that the United States won’t lose its edge if we consider proposals like that from Perry that cancel a new nuclear-armed cruise missile and begins to slowly retire the ICBM leg of the nuclear triad.  Our nuclear submarines and bombers alone guarantee that we can always deliver devastating nuclear retaliation to any nation that might consider an attack on the United States.

James E. Doyle is an independent nuclear security specialist. From 1997 to 2014, he was on the technical staff of the Nonproliferation Division at the Los Alamos National Laboratory.