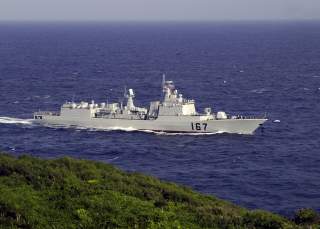 In the past two weeks, Filipino President Duterte has agreed to 13.5 billion dollars in trade deals with China, softened his country’s claims to Scarborough Shoal, and called for the expulsion of U.S. troops. This Chinese relations coup, along with growing Asian appetite for alternative trade deals to the stalled Trans-Pacific Partnership and the creation of the Asian infrastructure development bank, illuminate China’s success in its contrarian campaign to the U.S. Pivot to Asia.

Under the U.S. Department of Defense’s Joint Operational Planning Process, these efforts would be called shaping activities—interagency activities performed to dissuade or deter potential adversaries and to assure or solidify relationships with allies prior to the start of a conflict. As Paul Scharre recently pointed out, this phasing construct does not adapt to gray-zone conflicts, where adversaries aim to accomplish goals prior to major combat.

While not a model, China’s shaping operations and operational preparation of the environment may be more easily understood through the lens of a strong-influence on Chinese strategic thought, Sun Tzu’s The Art of War. The Art of War helps expose the motivation behind past, current, and future Chinese actions, and provides a useful frame of reference to interpret Chinese statecraft.

CHINESE NATIONALISM AND THE MORAL INFLUENCE

The Art of War’s opening chapter considers five factors when calculating the chance of victory in war: moral influence, weather, terrain, command, and doctrine. “Moral influence” is an echo of the “Populace” or “enmity” third of Clausewitz’s trinity, a reference to the populace’s appetite for conflict and their belief in the virtue of its cause.

By moral influence I mean that which causes the people to be in harmony with their leaders, so that they will accompany them in life and unto death without fear of mortal peril (Art of War, Chapter 1, Plans).

The Chinese Communist Party wisely begins shaping national attitudes towards the South China Sea during elementary education. Classrooms teach every child that the People’s Republic stretches down to the James Shoal; territorial disputes with other nations go unmentioned. Unsurprisingly, these beliefs persist into adulthood. In a 2014 poll by the Perth USAsia Centre, nearly every Chinese adult surveyed believed that all territory within the nine-dash line belonged to China. Effectually, this means that the Chinese population could see U.S. military action against South China Sea territories as invasive, akin to how American’s might perceive an attack on Guam, or even Hawaii.

This kind of domestic shaping activity has no place within the Department of Defense’s Joint Operational Planning Process. American values and the shorter timelines of American war-planning preclude it. The closest parallel, strategic communication, focuses on targeting key audiences within U.S. and foreign government, or foreign populations, not the American people themselves, and JOPP leans towards framing campaigns as exogenous from the U.S. population. It does, however, note the importance of alliances.

After the Hague’s Permanent Court of Arbitration ruled against Chinese claims within the South China Sea in July, Russia and China announced a September joint naval exercise demonstrating their capabilities and mutual support to other claimants. The growing military cooperation between the two states highlights the ascending nature of the relationship between Russia and China, an about-face from their Cold War rivalry.

In the eleventh chapter of the Art of War, Sun Tzu discusses the need for careful evaluation of potential allies:

We cannot enter into alliances with neighboring princes until we are acquainted with their designs (Art of War, Chapter 11, The Nine Variations).

Throughout its history, Russia has always oscillated between western and eastern oriented relations and in the 1990s, after the USSR’s dissolution, Russia stood firmly in the western camp. Under Vladimir Putin’s leadership, a more independent Russia emerged, which progressively forsook alignment with western-led international institutions and policies. As Russian rhetoric and actions increasingly disparage the U.S. led international order, Russia has demonstrated to China that they share a common goal—reshape the international system and institutions to reflect a relative decline in U.S. power. This commonality makes a secretive defense pact between the states all the more likely, meaning any U.S. led actions against island chains in the South China Sea could be met by Russian aggression against the Baltic states or direct military aid in the Pacific. The imprecise nature of their defense relationship offers great deterrent value against the U.S. use of force to dislodge Chinese forces from their island fortresses at Fiery Cross, Subi, Mischief Reef and Woody Island.

As Thomas Shugart cleverly demonstrated in a recent article, the reefs and islands that the People’s Liberation Army occupy in the South China Sea are big and getting bigger. Harbors have been dredged and islands expanded to create bases capable of housing multiple squadrons of Chinese fighters and support aircraft, robust air defense systems, and Chinese warships. Sun Tzu would applaud the efforts to fortify:

Anciently the skillful warriors first made themselves invincible and awaited the enemy’s moment of vulnerability (Art of War, Chapter 4, Dispositions).

China continues to strengthen its military position through the seizure (and creation) of key terrain within the South China Sea, possibly even on Scarborough Shoal. While the U.S. has Philippine basing options that provide similar geographic advantages in a shooting war, they have no surety that they will be able to use them. Access to them could be denied on a political whim. China’s network of artificial islands, on the other hand, will remain available for force projection across southeast Asia regardless of which alliances the U.S. disrupts.

The Obama Administration’s Pivot to Asia has attempted to strengthen alliances with historic U.S. partners and bring aboard new ones, like Vietnam. Unfortunately, animosity between potential allies (i.e., Japan and South Korea) will likely result in a “wheel and spoke” alliance structure where nations have greater ties to the United States than each other. To its credit, the United States has created initiatives like the Trans-Pacific Partnership (TPP) to forge stronger ties between Pacific allies, notably leaving China out of the agreement. China has responded by sponsoring its own free-trade agreement, the Regional Comprehensive Economic Partnership (RCEP), which would include all claimants to the territory within the South China Sea and ostracize the United States.

Thus, what is of supreme importance in war is to attack the enemy’s strategy, next best is to disrupt his alliances (Art of War, Chapter 3, Offensive Strategy).

Make no mistake. China badly wants the Trans-Pacific Partnership to fail and its diplomatic actions aim at continuing to increase their trade with other Asian nations relative to the United States. The People’s Republic of China will offer lucrative trade deals, military relationships, and political support to East Asian neighbors to draw key nations out of the U.S. sphere of influence and weaken their collective will to oppose China. After the Hague’s tribunal ruled in favor of the Philippines, Communist Party officials actively censored inflammatory posts about the verdict to prevent friction-causing protests and enable the recent turn of events in Sino-Philippine relations. The destruction and weakening of U.S. engagement with current and potential Asian allies is the cornerstone of China’s long-term agenda for the region and a key focus of their shaping operations.

SHAPING ACTIVITIESGray-zone conflicts are contests composed almost entirely of shaping activities and deterrence measures aimed at achieving clear policy outcomes while avoiding major war. Unfortunately, traditional Department of Defense operational plans and planning processes tend to focus on setting the logistical conditions and combat strategy in periods before conflict, not achieving informational or political goals. As the U.S. Department of Defense increasingly finds itself involved in all aspects of foreign policy, it must either drastically improve its organic capabilities or find more effective ways to incorporate, promote, and resource other government agencies with roles in shaping activities, like the Intelligence Community and State Department. The relative success of Chinese and American shaping operations will ultimately determine which tools policymakers use to resolve disputes within the South China Sea and whether this conflict will expand to a conventional war or contract to more harmonious negotiations. Right now, both nations are wrestling for positions of influence to set conditions for victory in either arena and achieve what Sun Tzu identified as the acme of skill, subduing an opponent without fighting.

Jules Hurst is an Army Reserve Officer and the former Senior Intelligence Analyst of 1st Ranger Battalion. He has deployed to Afghanistan four times in support of a USSOCOM Task Force and has just completed a novel about future infantry combat in the South China Sea. You can follow him @JulesHawke. The views expressed here are his own and do not reflect the views of the Department of Defense or the Department of the Army.