Swarming Mini-Drones: Inside the Pentagon’s Plan to Overwhelm Russian and Chinese Air Defenses 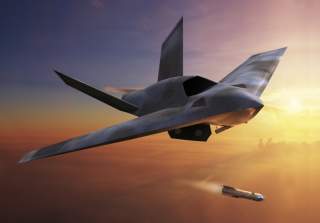 Air Force scientists and weapons developers are making progress developing swarms of mini-drones engineered with algorithms which enable them to coordinate with one another and avoid collisions.

Senior Air Force officials have said that the precise roles and missions for this type of technology are still in the process of being determined; however, experts and analyst are already discussing numerous potential applications for the technology.

Swarms of drones could cue one another and be able to blanket an area with sensors even if one or two get shot down. The technology could be designed for high threat areas building in strategic redundancy, Air Force Chief Scientist Gregory Zacharias told Scout Warrior in an interview.

Groups of coordinated small drones could also be used to confuse enemy radar systems and overwhelm advanced enemy air defenses by providing so many targets that they cannot be dealt with all at once, he said.

Zacharias explained that perhaps one small drone can be programmed to function as a swarm leader, with others functioning as ISR (intelligence, surveillance, reconnaissance) platforms, munitions or communications devices. He also said there is great strategic and tactical value in operating a swarm of small drones which, when needed, can disperse.

"Do you want them to fly in formation for a while and then disaggregate to get through the radar and then reaggregate and go to a target? They can jam an enemy radar or not even be seen by them because they are too small. The idea is to dissagregate so as not to be large expensive targets. In this way if you lose one you still may have 100 more," he explained.

An area of scientific inquiry now being explored for swarms of drones is called "bio-memetics," an approach which looks at the swarming of actual live animals -- such as flocks of birds or insects -- as a way to develop algorithms for swarming mini-drone flight, Zacharias added.

"It turns out you can use incredibly simple rules for formation flight of a large flock. It really just takes a few simple rules. If you think of each bird or bee as an agent, it can do really simple things such as determine its position relative to the three nearest objects to it. It is very simple guidance and control stuff," Zacharias said.

Also, small groups of drones operating together could function as munitions or weapons delivery technology.  A small class of mini-drone weapons already exist, such as AeroVironment’s Switchblade drone designed to deliver precision weapons effects.  The weapon, which can reach distances up to 10 kilometers, is engineered as a low-cost expendable munition loaded with sensors and munitions.

Air Force plans for new drones are part of a new service strategy to be explained in a paper released last year called “autonomous horizons.”  Air Force strategy also calls for greater manned-unmanned teaming between drones and manned aircraft such as F-35s. This kind of effort could help facilitate what Defense Secretary Ashton Carter has said about mini-drones launching from a high-speed fighter jet.

In the future, fighter aircraft such as the F-35 or an F-22 may be able to control drones themselves from the cockpit to enhance missions by carrying extra payload, extending a surveillance area or delivering weapons, Air Force scientists have said.

Zacharias explained this in terms of developments within the field of artificial intelligence. This involves faster computer processing technology and algorithms which allow computers to increasingly organize and integrate information by themselves - without needing human intervention. Human will likely operate in a command and control capacity with computers picking the sensing, integration and organization of data, input and various kinds of material. As autonomy increases, the day when multiple drones can be controlled by a single aircraft, such as a fighter jet, is fast approaching.

The effort, which would bring a new range of strategic and tactical advantages to the U.S. military, will be focused on as part of a special Pentagon unit called the Strategic Capabilities Office, or SCO.

While the office has been in existence for some period of time, it was publically announced by Defense Secretary Ashton Carter during the recent 2017 budget proposal discussions. The new office will, among other things, both explore emerging technologies and also look at new ways of leveraging existing weapons and platforms.

Carter said swarming autonomous drones are a key part of this broader effort to adapt emerging technologies to existing and future warfighting needs.

“Another project uses swarming autonomous vehicles in all sorts of ways and in multiple domains.  In the air, they develop micro-drones that are really fast, really resistant.  They can fly through heavy winds and be kicked out the back of a fighter jet moving at Mach 0.9, like they did during an operational exercise in Alaska last year, or they can be thrown into the air by a soldier in the middle of the Iraqi desert,” Carter said. "And for the water, they've developed self-driving boats which can network together to do all kinds of missions, from fleet defense to close-in surveillance, without putting sailors at risk.  Each one of these leverages the wider world of technology."

“Researchers continue to push the state-of-the-art in autonomy control and plan to launch 30 autonomous UAVs in 2016 in under a minute,” an ONR statement said last year.

A demonstration of the technology is planned from a ship called a Sea Fighter, a high-speed, shallow-water experimental ship developed by the ONR.

While swarms of mini-drones clearly bring a wide range of tactical offensive and defensive advantages, there is also the realistic prospect that adversaries or potential adversaries could use drone swarms against the U.S.

This is a scenario the services, including the Army in particular, are exploring.

Pentagon threat assessment officials have for quite some time expressed concern that current and future enemies of the U.S. military might seek to use massive swarms of mini-drones to blanket an area with surveillance cameras, jam radar signals, deliver weapons or drop small bombs on military units.

As a result, the Army Test and Evaluation Command put these scenarios to the test in the desert as part of the service’s Network Integration Evaluation, or NIE, at White Sands Missile Range, N.M.

The mini-drones used were inexpensive, off-the-shelf commercial systems likely to be acquired and used by potential adversaries in future conflict scenarios.

The drones were configured to carry special payloads for specific mission functions. Cameras, bomb simulators, expanded battery packs and other systems will be tested on the aircraft to develop and analyze potential capabilities of the drones, an Army statement said.

The mini-drones, which included $1000-dollar quadcopters made by 3-D Robotics, were placed in actual mock-combat scenarios and flown against Army units in test exercises.

“Acting as a member of the opposing force, the drones will be used for short-range missions, and for flooding the airspace to generate disruptive radar signatures. They will also be used as a kind of spotter, using simple video cameras to try and locate Soldiers and units,” an Army statement from before the exercise said.

There were also plans to fit the drones with the ability to drop packets of flour, simulating the ability for the swarm to drop small bombs, allowing the drones to perform short-range strike missions, the Army statement said.

"Right now there's hardly anyone doing swarms, most people are flying one, maybe two, but any time you can get more than one or two in the air at the same time, and control them by waypoint with one laptop, that's important," James Story, an engineer with the Targets Management Office, Program Executive Office for Simulation, Training and Instrumentation, said in a statement last Fall. "You're controlling all five of them, and all five of them are a threat."