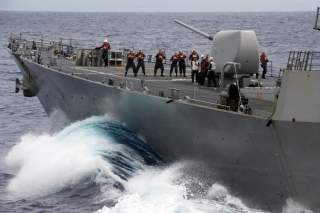 Since the end of 2013, over 300,000 migrants have crossed the Central Mediterranean from North Africa to Italy and Malta. The Central Mediterranean route has accounted for 85% of migrant deaths, yet it comprises just over a quarter of all arrivals from 2014 to mid-2016. This region has yet again become high-risk to migrants and high-reward to smugglers in the six months since a migrant deal between the European Union and Turkey blocked the main routes into Europe.

The greatest threat to American and European interests in Libya is the weak power projection of the United Nations-backed Government of National Accord (GNA). The common denominator among irregular migration, armed groups using Libya as a safe haven, and criminal enterprises capitalizing on the country’s lawlessness is Libya’s inability to establish an internationally recognized and domestically supported government. This Rubick’s Cube lying less than 310 miles south of Italy is the key impediment to managing the greatest refugee and migrant crisis in seventy years.

Breaking the business model of migrant smugglers’ activities is one of the main challenges for the international community. The annual revenue of migrant smuggling in 2015 was worth an estimated $5-6 billion, with 90% of the migrants’ travel being facilitated by members of a criminal network. So long as there remains a steady flow of migrants, smugglers will find avenues and incentives to operate.

While the Government of National Accord can authorize consent for international support, such as nearly 150 U.S. airstrikes against Islamic State elements and an EU mission to train the Libyan coast guard and navy in countering irregular migration, the international community is constrained by the lack of a viable partner across the Mediterranean who can patrol Libya’s porous borders, dislodge criminal enterprises, and monopolize governance and the use of force.

An increased presence by international and charity vessels lowers the barrier of entry for smugglers to assume risk since all vessels are required by international law to rescue individuals in distress at sea. Smugglers have strategically responded to a more crowded marketplace by launching migrant vessels without enough fuel supply to reach the coast. Thus, the objective becomes much closer as their destination need not to be the shores of Malta, Lampedusa, or Lesvos Island, but rather within the range of military, charity, or commercial vessels for rescue. This tactic may certainly increase if and when NATO and the EU are given consent by the GNA to operate within Libya’s territorial waters.

While some may compare any prospective NATO operation in the Mediterranean to the counter-piracy operations of Combined Task Forces 150 and 151, NATO’s Operation Ocean Shield, or the EU’s Operation Atalanta, the phenomenon in Libya is systematically different than that in Somalia. While at its peak, piracy off the Horn of Africa occurred because of a lack of economic opportunities on land, whereas criminal networks are using the migrant crisis and instability in Libya as a conduit to reap profits. A maritime show of force helped to drive down piracy in the Indian Ocean, yet the same approach will give smugglers an increased number of targets for migrant vessels.

Thus, it is imperative the international community has a strategy to combat the smugglers’ networks on land. Under a proper United Nations Security Council Resolution and the consent of the Government of National Accord, the EU and NATO can leverage its intelligence, surveillance, and reconnaissance assets to map and flatten smugglers’ networks. This will transition current efforts to an intelligence-led operation, rather than one that is intelligence-driven. U.S. Special Operations Command has already been exploring non-kinetic and non-combat opportunities to gather human intelligence (HUMINT) on personalities and leaders of transregional groups in Libya, albeit with a focus on Islamic State elements.

Competing armed groups, tribal factions, and memories of 20th century colonialism engrained in Libya’s social fabric make Western efforts to support a credible international partner within Libya a long-term, ambitious goal. Crises will continue to metastasize until the Libyan government emerges as having the monopoly over governance and ceases to operate as another faction in the country’s civil war. Until then, it will remain as the region’s Wild West as non-state actors compete for territory, influence, and profit.

Nicholas A. Glavin is a researcher at the U.S. Naval War College’s Center on Irregular Warfare and Armed Groups (CIWAG). The views expressed here are the author’s own and do not represent those of the Department of Defense, Department of the Navy, Naval War College, or any part of the U.S. Government. Nicholas tweets in a personal capacity @nickglavin.