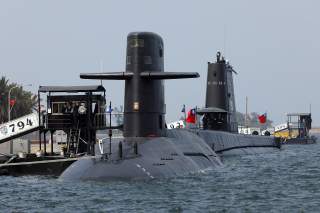 Taiwan’s defense ministry has reached a deal with a Dutch firm to modernise the two ageing submarines that form part of its maritime defenses against an invasion by China. But this means the navy will have no viable submersible deterrent at its disposal for two years.

Rotterdam-based firm RH Marine, which supplies a range of maritime electrical and automation systems, will determine the feasibility of an upgrade and provide technical support for the subs, which were built some 30 years ago in the Netherlands. Both are in the Hai Lung class of vessels, modeled on the Dutch Navy’s antiquated Zwaardvis series.

The refitting will take place from 2020 to 2022, with the aim of extending their lifespan beyond the 2030s, according to the defense ministry report, which has a four-year program of upgrading the navy’s minuscule submarine “fleet”. RH Marine will help overcome issues such as cramped interiors and systems integration.

Combat capabilities will also be modernized, partly with the aim of addressing a shortage of parts due to the submarines’ advanced ages. The navy wants to equip the vessels with long-range heavy torpedoes from the US, and upgrade their electronic warfare and combat systems, Taipei-based Liberty Times reported, citing a defense official.

It revealed that Taiwanese officials had approached representatives of an unnamed US defense manufacturer at the Taiwan-US Defense Business Forum earlier this month and reached a tentative agreement for the sale of unidentified equipment for the subs.

Taiwan has been trying for decades to place orders for new diesel-powered submarines capable of circumventing Chinese naval blockades and ensuring that its sea lanes remain open, but the country’s pariah status is a barrier. The most recent bid was in the late 1980s, when the Dutch scrapped a deal under pressure from Beijing.

The island still managed to get two submarines back before the shutters came down, and they were fitted with useful modifications — including noise-cancellation machinery on a false deck with spring suspension to enable silent running.

In 2016, the United States sold Taiwan UGM-84 Harpoon anti-ship missiles that would enable the subs to attack Chinese assets from Taiwanese waters. Targets could include container ports in Shanghai and nuclear submarines at the secret naval base on Hainan island.

The Taiwanese Navy has two even older submarines, Tench class vessels commissioned in the 1940s that were purchased from the US Navy in the 1970s. Their torpedo tubes were sealed, but the subs are still operational and reportedly capable of combat.

Last year Taipei announced a US$19 million retrofit program to improve the hulls and diesel navigational systems, intended to extend their service lives until 2026. This will make them the longest-serving submarines in history, though their deterrence value against the Chinese forces is questionable.