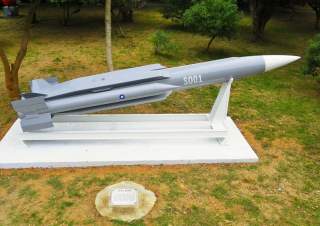 According to the media, an “HF-3 extended range model missile” (雄三增程型飛彈) project may be in the works and a testing phase is slated for completion by the middle of 2017, to enter mass production in 2018. The missiles could be deployed in the mountainous ranges surrounding Taipei with a range span covering the entire Taiwan Strait.

Plans to upgrade the capabilities of the Hsiung Feng missile systems were reportedly scrapped at the outset of the first Ma Ying-jeou administration (2008-12), which pursued a policy of rapprochement with the People’s Republic of China (PRC). Su Chi (蘇起), who served as Ma’s first National Security Council Secretary-General, led the charge to discontinue the missile systems range-extension program.

However, Taiwan continued the production of shorter-range HF-3 missiles capable of maritime interdiction and of striking coastal-military installments, but ostensibly ceased any follow-on research to develop missiles that would have extended range. Yet, there were reports that the missile range extension program may have been resuscitated as early as 2014.

In recent years, the Asia-Pacific theatre has experienced a dramatic transformation as militaries across the region develop more advanced military technologies such as hypersonic missiles. These missiles can travel more than five times the speed of sound and are capable of striking time-critical targets at long range much more quickly. The current deployed HF-3 is reportedly capable of speeds of up to Mach 2.5-3.

In April 2016, the PLA successfully tested its new high-speed maneuvering warhead DF-ZF hypersonic glide vehicle. According to experts, “[China’s] hypersonic glide vehicles could reach Mach 12 speeds of up to 9,127 miles per hour, potentially compromising a U.S. missile defense.” Weapon platforms such as the YJ-12 supersonic ASM and CM-400AKG hypersonic air-to-surface missile further complicate Taiwan’s defense. Indeed, such capabilities could provide the PLA with greater strategic depth in a Taiwan contingency, or other scenarios that may involve the U.S. military.

Recent speculations about the missile extension program signal a contrast between the Tsai administration’s approach and the previous Ma government in dealing with the PLA threat, as the latter was criticized for not investing enough in the military. While the previous administration relied upon political talks to offset the military threat, the new administration appears to be more determined to directly counter the PLA’s military advances.

Despite the clear overtures made by the Ma administration, the PLA continued to develop its ability to invade Taiwan and to enhance its coercive capabilities for use against the island. As the U.S. Defense Department’s Military and Security Developments Involving the People’s Republic of China 2016 explicitly states:

China’s multi-decade military modernization effort has eroded or negated many of Taiwan’s historical advantages in deterring PLA aggression, such as the PLA’s inability to project sufficient power across the Taiwan Strait, the Taiwan military’s technological superiority, and the inherent geographic advantages of island defense.

In late August, a media outlet also reported that Taiwan’s National Chung-Shan Institute of Science and Technology (CSIST, 中山科學研究院) was preparing to submit a project proposal to deploy a new generation of long range HF-3 missiles in 3 to 5 years. It is not clear whether the plan has been approved by President Tsai Ing-wen.

While, in the past, the U.S. government has expressed reservations about some of Taiwan’s missile programs, due their perceived “offensive” capabilities—such as in the case ofHF-2E—these concerns have been relatively quiet against the backdrop of the PLA’s rampant military modernization.

Whether the U.S. government may be toning down its opposition to Taiwan’s missile programs remains to be seen. At the very least, the relative quiet perhaps signals a change in Washington’s perception of the nature of these extended range coastal defense weapons, and their importance to countering the  shifting military balance of the Taiwan Strait.

The main point: Taiwan may be considering an upgrade to the HF-3, and Washington’s attitude towards the nature of “defensive” weapons seems to be changing. Both developments are due in part to the urgency of countering the shift in the military balance within the Taiwan Strait.