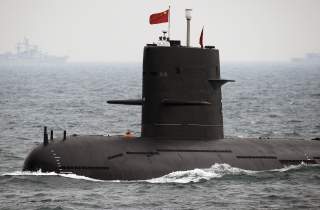 Since September 2016, China Telecom has replaced satellite stations on Fiery Cross Reef, Subi Reef and Mischief Reef in the Spratly Islands with 4G fibre-optic cable stations. Fibre-optic cables are much faster and much more stable than satellite systems. Installation began just two months after an arbitral tribunal in the Hague unanimously found against Chinese territorial claims in the South China Sea. The stations significantly strengthen China’s command and control capabilities in the South China Sea. Over the longer term, China’s cable strategy holds serious security implications for the US, Taiwan and the Asia–Pacific community.

Undersea fibre-optic cable is the backbone of data transmission and intercontinental communications. A cable can transmit the equivalent of the entire printed collection of the Library of Congress in about 20 seconds. In 2014, roughly 98% of emails, telephone calls and internet traffic travelled through underwater cables.

The Chinese military, along with the Ministry of Information Industry, has concentrated on developing its submarine cable technology since the 1990s. In 2002, the PLA used a self-developed undersea cable-laying system for the first time. It deployed its first optical cable-laying ship in 2015. And last year, the PLA Naval University of Engineering, Hengton Optic-Electric, Zhongtian Technology Submarine Cables and Beijing University of Posts and Telecommunications co-established the Joint Lab of Underwater Optical Networks, a science and engineering research facility.

Although undersea cables are the most critical infrastructure supporting today’s global data and voice communications, they’re surprisingly vulnerable. In general, cables have only a thin rubber sheath. Shipping and fishing activities are the most common sources of damage. China has taken steps to protect its submarine cables and conducts regular patrols. It has also imposed special submarine cable protection measures during major international events, such as the Expo Shanghai in 2010 and the Belt and Road Summit in May 2017, to prevent propaganda channels, live streams and international calls from being disrupted.

China’s cable industry has rapidly transformed itself. It used to rely heavily on imports, but today it competes strongly in international markets. In 2011, for example, Huawei Marine Networks constructed a 1,200 kilometre ultralong non-repeater cable system that connects five islands of Indonesia’s eastern archipelago. Between 2012 and 2015, Chinese companies’ market share of global cable projects was only 7%; that figure is projected to increase to 20% by 2019. Chinese companies currently lag behind only France’s Alcatel-Lucent and Switzerland’s TE Connectivity in the sector.

China sees cable networks as an essential element of its One Belt, One Road initiative. Undersea cables will ensure that Beijing is well placed to influence media and psychological operations as part of its ‘three warfares’ strategy. In the military arena, such a cable network creates a strategic advantage in anti-submarine warfare for the Chinese navy. It will form an irreplaceable part of China’s underwater observation system in the South China Sea. This ‘underwater great wall’ includes a number of subsurface sensors connected through optical cables to a central processing and monitoring facility in Shanghai. The system will function much like America’s SOSUS network, which employs fixed sensor arrays to detect Soviet submarines. A Chinese system could erode American undersea warfare advantages in the South China Sea.

Undersea cables have been described as Taiwan’s Achilles’ heel. In the event of a conflict across the Taiwan Strait, the cables will be prime Chinese targets: cutting them will cripple Taiwan’s international communications. And the damage wouldn’t be confined to Taiwan. There are at least 10 international submarine cables between Taiwan and Asia–Pacific countries. Damaging Taiwan’s cables would disrupt international business and financial markets, leading to severe economic effects on regional countries, including Japan, Singapore, Indonesia and Australia.

Articles 113 to 115 of the UN Convention on the Law of the Sea address the rights and obligations of states to adopt laws and regulations to protect submarine cables on the high seas.  Australia has established the world’s most advanced cable protection regime. It passed the Cable Protection Bill in 2005 and was the first state to join the International Cable Protection Committee (ICPC). It’s also one of the few countries working with regional states amid security concerns about Chinese cable companies. Those actions demonstrate that Canberra could play a leading role in promoting regional cable protection. It could, for example, encourage Asia–Pacific countries to cooperate fully with the ICPC to focus international attention on cable security and to make China’s undersea monitoring in the South China Sea harder.

The US and its Asia–Pacific partners should also monitor the security of cable routes, using the automatic identification system to pinpoint the location of faults. And they should establish multilateral cooperation mechanisms to avoid delays to cable repairs. Such efforts would go some way to countering yet another area in which China is quietly developing a capability that could disrupt the region, and prevent Taiwan from being the weakest point in the Asia–Pacific submarine cable network.

This first appeared in ASPI's The Strategist here.
Image: Reuters.