Taiwan's Other Big News: Is Taipei Getting U.S. Harrier Jets? 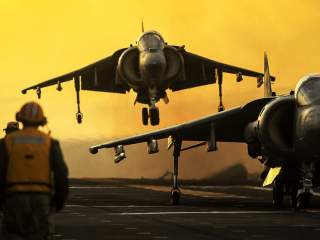 While much of the world was focused on Saturday’s election success of Tsai Ing-wen and what it might mean for cross-strait relations, another important development for Taiwan that directly impacts regional security slid by largely unnoticed.

Taipei desperately wants Lockheed Martin’s stealthy, short takeoff, vertical landing F-35B—which is currently operational with the U.S. Marine Corps. But the United States is very unlikely to sell Taiwan the advanced supersonic stealth strike aircraft for fear of antagonizing Beijing—which regards the island as a breakaway province. Indeed, in previous years, the United States declined to sell Taipei new Lockheed Martin F-16 Fighting Falcons, even though the island’s supporters in Washington had lobbied hard for the sale. Given the F-35’s offensive potential and the sensitive nature of its technology, the Pentagon is likely to be even more reticent about supplying Taiwan with the Joint Strike Fighter.

While an F-35 sale is likely to be out of the question, upgraded Harriers could be useful to Taiwan because of their short-takeoff capability—even if Taipei is set on the likely futile hope of one day buying the Joint Strike Fighter. In the event of war with mainland China, Beijing’s forces are expected to obliterate Taiwan’s runways and other fixed infrastructure within hours. China has thousands of ballistic and cruise missiles aimed at Taiwan in event that cross-strait relations devolve into war. An aircraft like the Harrier—which can operate from austere strips—would be particularly useful for Taiwan in that scenario.

While the Harrier is relatively elderly, the U.S. Marine Corps aircraft have a good amount of service life left on their airframes. The last new aircraft was delivered in 1997 while the last jet remanufactured to the AV-8B Harrier II Plus configuration was delivered in 2003. That makes the Harrier fleet newer than much of the U.S. tactical fighter inventory. The Marines had originally planned to upgrade the AV-8B in order to keep the jet in service past 2030. The service only decided last year to retire the aircraft in 2025 in favor of the F-35.

Moreover, while the Harrier is not stealthy or supersonic—the aircraft can be used to good effect as a beyond visual range fighter, as the British demonstrated with the Royal Navy’s now-retired Sea Harrier FA2/Blue Vixen radar/AIM-120 AMRAAM combination. According to one former Royal Navy aviator, even though it was subsonic, the Sea Harrier FA2 offered beyond visual range air-to-air capability comparable to the U.S. Navy’s Boeing F/A-18C Hornet. It’s reasonable to infer then that the AV-8B Harrier II Plus—which was retrofitted with a slightly modified APG-65 radar from the F/A-18A—and equipped with AIM-120s could offer decent air combat capability.

Moreover, Taiwan could potentially refurbish the airframe and add an active electronically scanned array radar (AESA) like the Raytheon AN/APG-79(V)X—which was specifically designed to be retrofitted in place of the APG-65 and APG-73—or the Northrop APG-83 Scalable Agile Beam Radar. The addition of an AESA could greatly enhance the Harrier’s beyond visual range air-to-air capability—beyond even what the Royal Navy achieved with its powerful Blue Vixen radar. Further, the U.S. Marines were already planning on the upgrading the Harrier with the AIM-9X Sidewinder high off-boresight missile—which would make the AV-8B a threat to be reckoned with even in a close-in visual range fight.

Meanwhile, the Marines are planning to add the ALE-47 V2 countermeasures dispenser, ALR-67 radar warning receivers and ALQ-164 electronic countermeasures pods to the Harrier. The AV-8Bs will also be modified with variable message format terminals, full Link-16 data-link capability and possibly the Tactical Targeting Network Technologies high-speed data-link. With full integration of the fourth generation Litening pod, it will be able to self-designate the AGM-65E missiles and GBU-54 Laser Joint Direct Attack Munitions. Overall, the modifications promise to keep the Harrier relevant for at least a few more years.

Nonetheless, the Harrier would still be difficult to maintain with the obtuse mounting of its Rolls-Royce F402-RR-408 turbofan engine. There is also the problem of supplying spare parts for the Harrier—indeed the Marines bought Britain’s entire inventory of seventy-four retired GR9A aircraft for cannibalization purposes. Moreover, the Harrier also has a relatively small payload and short unrefueled mission radius of only about 300 miles.

That being said, Taiwan covers a small area—and really—it’s only hope in a conflict with Beijing is to hold out long enough for U.S. forces to arrive. As such, the Harrier might be the best option for Taipei even if it’s not an ideal solution. The island’s prospects of buying the F-35B are remote at best.