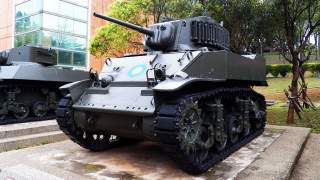 When the Allies launched the amphibious landing in Normandy in 1944, one of their chief fears was that German Panzers would roll down to the beach within twenty-four hours and crush sodden Allied infantry under their tracks. To protect against such an outcome, the Allied airpower ruthlessly scourged road and rail links leading to Normandy, and airborne operations preceding the landing had as a chief objective impeding a German armored counterattack.

Ultimately, though, it was Hitler himself who did the most to prevent that scenario from unfolding: convinced that the real Allied landing was going to come at Calais, he refused to release the Panzer Lehr and Twelfth SS Panzer Divisions in reserve to counterattack the Normandy beachhead until too late. After a harrowing battle to overcome German beach defenses, the Allied infantry managed to clamber off the beaches and establish a firm foothold on shore.

Though tanks would seem the ideal mobile weapon for countering such risky operations as amphibious landings, they rarely succeeded in doing so during World War II. German armor did come came closer to unraveling earlier Allied landings in Sicily, Salerno and Anzio. In Sicily, German Panzers actually made it so far down the beach that they engaged in a gun duel with Allied destroyers. (For the curious: the destroyers won.) At Anzio, an armored counterattack managed to contain the Allied landing zone, preventing U.S. troops from breaking out. But none of the German tank attacks actually drove the Allies back into the sea. A counterattack by seventeen Japanese tanks against a U.S. Marine beachhead at Peleliu was even more ill-fated.

The problem was that operations as risky as amphibious landings were usually only attempted when one side had overwhelming superiority over the other. But, four years after World War II ended, Chinese tanks did finally succeed in crushing an amphibious invasion—and they did it with arguably the worst U.S. tank to see extensive service in World War II.

The People’s Liberation Army secured control of mainland China by the end of 1949. Its Nationalist opponents in the Kuomintang, reeling from defeat after defeat, retreated to various islands on the coast, most notably Taiwan and Hainan. At that time, the PLA disposed of only modest air and sea assets, but it was determined to seize the islands while the Nationalists were in retreat and disarray.

Standing directly in between the mainland and Taiwan were two islands a short distance off the coast of Fujian province, Kinmen and Matsu. These had been heavily fortified by the Nationalists, and the PLA considered their capture prerequisites to any serious attempt to take Taiwan itself. Kinmen—which means “Golden Gate,” and measures roughly one hundred square miles—was located a short distance away from the major mainland city of Xiamen, well positioned to intervene against an invasion of Taiwan.

Troops of the PLA’s Tenth Army had captured three islands off of Xiamen in October in the face of ineffectual Nationalist resistance. Calculating that the Republic of China forces had only eleven thousand troops on Kinmen island, the PLA assembled nineteen thousand troops on the mainland and Dadeng Island for the assault. These included the three regiments of the Eighty-Second Division, and three more regiments detached from the Eighty-Fourth, Eighty-Fifth and Eighty-Seventh. The light infantry boarded hundreds of civilian boats on the morning of October 24 and were ready to depart by 6:00 p.m. that evening, aiming for the beach at Longkou. However, the PLA troops and their transports lacked radio communication, and many of the boats became lost during the night and landed westward.

The Tenth Army’s intelligence section, which lacked informants on the island, had badly miscalculated—there were seventeen thousand Nationalist troops of the Twelfth Army on Kinmen and another three thousand on nearby Lesser Kinmen. They had prepared the beaches on northwest Kinmen with over seven thousand land mines, two hundred bunkers and hundreds of beach obstacles to counter landing boats. The experienced 201st Youth Division manned the beach defenses, while the exhausted 118th and Eighteenth Divisions waited in reserve, along with the First Tank Battalion, with twenty-two Stuart light tanks in its inventory.

You can check out a map showing the disposition of the opposing forces here.

The M3 and M5 Stuart Light tanks had boasted only barely adequate armament and armor when the United States entered World War II in 1941, and only grew more obsolescent from there on. Their thirty-seven-millimeter “pop guns” had only a slender chance of penetrating the standard German Panzer IV tank, and no chance at all against heavier Panthers and Tigers. The best that can be said is that they performed acceptably when their opponents had few antitank weapons to fire back with, which was sometimes true in the Pacific theater of World War II. As it happened, the veteran tankers in the First Battalion had served alongside American troops in Burma, during the conflict there.

Nonetheless, the PLA attack might have had more success if Nationalist troops were not graced by a series of lucky breaks, all of which must have seemed like minor misfortunes at the time. Lucky break number one: an hour after midnight on October 25, Nationalists troops accidentally set off their own land mines. This caused the beach defenses to go on alert and shoot flares into the night—upon which they realized they were about to be swamped by nearly eight thousand PLA infantry, approaching on wooden sampans.

Troops of the 201st Division began blazing away at the incoming boats with machine guns, mortars and artillery, inflicting heavy casualties. The PLA landing force, in turn, received fire support from just eight 75- and 105-millimeter howitzers shooting across the water from the mainland. However, as the howitzer batteries could not communicate with the PLA infantry, they were forced to cease fire once friendly troops were established on shore.

Worse, while the PLA boats made their initial approach during high tide, many became stuck on beach obstacles as the tide receded. Some of the more unfortunate PLA troops had to swim over 650 yards to shore, under withering Nationalist fire. Many later surrendered after their rifles proved inoperable, jammed by water, sand and grit.

Then, the second lucky break for the Nationalists: at dusk the preceding day, the M5A1 Stuart tank #66 under command of Lt. Yang Chan bogged down on a sand dune on Longkou beach during a defensive exercise. The other two Stuarts in his platoon stayed behind in an attempt to tow out the immobilized vehicle. The tankers were still on the beach, enjoying a snack at 3:00 a.m., when the three thousand troops of the 244th PLA infantry regiment swarmed ashore from wooden boats around 4:00 a.m. The stunned tankers opened fire with their three thirty-seven-millimeter cannons and nine machine guns.

The fortuitous presence of Yang Chan’s tank platoon managed to contain the PLA landing at Longkou. While immobilized tank #66 stayed behind to cover its sector of the beach—only firing from the turret because the hull was facing the wrong way!—the other two tanks launched joined a counterattack on Guanyinting Hill. Six more Stuart tanks soon swept down from the First Battalion, followed belatedly by infantry of the 118th Division. The counterattack overran the PLA invader—literally, as Stuart tanks exhausted their ammunition and resorted to charging forward into their massed opponents. Together, the Stuarts and infantry made their way to the beaches, blasting the stranded boats with tank guns, grenades and even infantry flamethrowers.

West of Longkou, however, the PLA 251st and 253rd regiments were successful in driving back the beach defenders and seized the towns of Guningtou and Linkou. The Communist troops dug themselves in, and soon were under unrelenting assault by Nationalist tanks and infantry.

The ROC forces finally had their third lucky break: the captain of the LST-400 Chung Lung, a tank landing ship in the Nationalist Navy, was involved in a secret peanut-oil smuggling ring between Kinmen and Taiwan. Due to a delay in receiving the latest illicit shipment, the Chung Lung was anchored nearby on the eve of the attack. Accompanied by a second Nationalist ship, it found dozens of sampans commandeered by the PLA stuck on beach obstacles. The landing ship’s sixteen forty- and twenty-millimeter antiaircraft guns proceeded to shred many of the helpless boats, which were badly needed to land the second wave of PLA infantry.

At 3:00 a.m. on October 27, the PLA landed one thousand men of the 253rd Regiment near Guningtou, and managed to link up with the troops holding the town after a desperate firefight. However, these were the only Communist reinforcements to arrive for the beleaguered first waves. Republic of China air and sea power soon made the passage impossible for the few remaining PLA boats.

Bloody street battles ensued in Linkou and Guningtou, with the Stuart tanks leading the charge for the Nationalist infantry, supported by B-25 and B-26 medium bombers in the air. The PLA troops were driven out of the town by the afternoon of the twenty-sixth, and the survivors surrendered after a short battle on the beach at 10:00 a.m. the following morning. Of the nine thousand PLA troops that landed on the island, roughly five thousand surrendered. None of the rest made it back. On the Nationalist side, there were 1,267 dead and nearly two thousand wounded.