A Terrorist's Dream: How Twitter and Toy Drones Could Kill a Lot of People 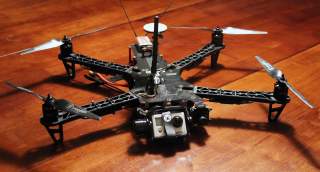 In late April, a toy drone buzzed past the palace of the king of Saudi Arabia, leading Saudi security forces to shoot it down. Online, a story spread quickly across the Internet that the Saudi royal palace was under siege and a full-fledged coup was in progress. Given the recent crackdown and imprisonment of wealthy and influential Saudis engineered by Saudi crown prince Mohammed bin Salman, the news was believable—at least initially. But in the end, just like the commercial drone, the story of the coup plot was also shot down, proved to be false and just another piece of the ubiquitous disinformation flotsam populating the World Wide Web.

Throughout history, certain individuals have played an outsized role in geopolitics and world affairs. Today, super-empowered actors have access to technologies that magnify their ability to wreak havoc. This trend will likely be further exacerbated by subsequent technological developments, with the ability of individuals and small groups to cause widescale disruptions to society—through cyberattacks or the use of drones coupled with a dedicated misinformation campaign—growing even more acute in the future. Moreover, individuals and small groups can easily be used by nefarious state sponsors as proxy actors in ongoing conflicts.

An individual, Serbian nationalist Gavrilo Princip, was responsible for assassinating Archduke Franz Ferdinand, the heir to the throne of the Austro-Hungarian Empire, in 1914. The assassination triggered a series of events that led to the First World War. Decades later, a Pakistani nuclear scientist, Abdul Qadeer (A.Q.) Khan, built a network in the 1990s that smuggled technology and nuclear know-how to rogue regimes in Iran, North Korea and Libya, drastically complicating the global security landscape.

Other individuals who have had a significant impact on national security include the lone-wolf terrorist Theodore Kaczynski, also known as the Unabomber; and Edward Snowden, the former National Security Agency contractor responsible for copying and leaking vast troves of classified information, impacting security procedures for how the United States government handles classified information.

Individuals and small groups have the potential to use an array of new and emerging technologies, including drones, virtual currencies, encrypted communications and artificial intelligence (AI). Additive manufacturing, or 3-D printing, has already been used by individuals to print workable firearms. Given that, there is a steady drumbeat of warranted concern over the potential use of specific technologies by nonstate actors. But it is not simply the use of technologies in isolation that presents the most significant challenge going forward, but rather the combination of these technologies—as evidenced in the Saudi scenario, where a drone was used in conjunction with a deliberate disinformation campaign perpetrated through social media.

Terrorists in the Middle East have also used Bitcoin and Paypal to finance activities in Indonesia. There are several other examples of terrorists relying on virtual currencies in the past year, including in Gaza. Terrorism scholar Daveed Gartenstein-Ross has warned that terrorists will harness the power of AI in the very near future as it becomes more widely availability in commercial markets at reduced costs. Individuals or small groups with nefarious intent will soon be able to modify and repurpose the technology to cause chaos.

Within a few years, the ability of AI to generate remarkably accurate artificial voices will pose a serious threat, as “a nefarious actor may easily be able to create a good enough vocal impersonation to trick, confuse, enrage, or mobilize the public,” according to William Welser IV, a management scientist and AI expert.

Several jihadi organizations have experimented with using either commercial drones or more sophisticated unmanned aerial systems. It seems inevitable that terror groups could have future access to precision weaponry with extended ranges capable of striking targets within a several hundred-mile radius. In Mosul, ISIS militants used drones to drop explosives on advancing Iraqi forces attempting to retake the city. In the next three to five years—perhaps sooner—it seems plausible that AI could support autonomous robots, including drone swarms.

The barriers to entry have never been lower for individuals to acquire commercial off-the-shelf technology that, when used for ill purposes, can be marshaled to have lethal effects. As these technologies become more ubiquitous, it would come as little surprise that individuals and small groups will exploit them to close the gap between their capabilities and those of advanced militaries.

One of the most odious aspect of the increased power of individuals and small cells of malfeasants is the potential for them to be used as proxy actors in a broader war between nation-states. The cyber equivalent of a dirty bomb could be a terrorist attack against critical infrastructure and industrial control systems (e.g., power, water, traffic, transportation supervisory control and data acquisition, or SCADA, systems).

As scholar Andrew Mumford has observed, cyberspace provides a platform for countries to work through proxies to indirectly wage war. The gray zone, defined as an area somewhere between war and peace, can be the ideal cover for states to use proxies, as the work of a few individuals or a small group is eminently less noticeable than an action undertaken by a nation-state. Moreover, state sponsors of proxy warfare have more options than ever, with the list of nonstate actors extending to include terrorists, insurgents, criminals, warlords, militias, paramilitaries, mercenaries and even pirates.

Zbigniew Brzezinski, who was President Jimmy Carter’s National Security Advisor, once observed, “It is infinitely easier today to kill a million people than to control them.”

This quote used to be true only of the advanced militaries of a select group of nation-states. In the near future, it could very well apply to lone wolves or a small cadre of well-trained terrorists.

Colin P. Clarke is a political scientist at the nonprofit, nonpartisan RAND Corporation and a nonresident Senior Fellow in the program on national security at the Foreign Policy Research Institute (FPRI).