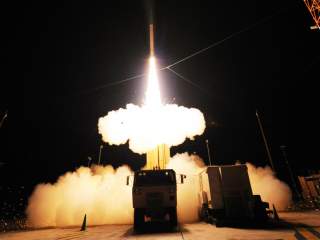 Tensions are once more running high on the Korean Peninsula. Yet again, North Korean provocations have triggered an action-reaction cycle that is bringing into sharp relief the competing interests of each of the major players on the Peninsula.

In the latest case, a fourth North Korean nuclear test in January, followed by the launch last week of a satellite aboard what is effectively an intercontinental range ballistic missile, has provided the impetus for Seoul to enter immediately into discussions with Washington about expediting the deployment of a sophisticated ballistic missile defense (BMD) system known as Terminal High-Altitude Area Defense (THAAD).

China, for its part, strongly opposes the deployment. Politically, such a development is an affront to China's prestige and its increasing sense of its role as the principal arbiter of security on the Korean Peninsula. More practically, Beijing is concerned that the placement of THAAD on the Peninsula, in particular the system's sophisticated X-Band radar, would provide radar coverage over much of China itself. This could be used by the United States to complicate China's own strategic planning, especially when integrated with other BMD systems across the region. Such misgivings are not altogether unfounded.

On the surface, upgrading South Korea's BMD system seems like a natural policy response in the face of a missile threat that appears to be increasing in size and improving in quality. And yet a closer look at the technical specifications of THAAD and the geographic features of the Korean Peninsula, which impose tight constraints on the kinds of missiles able to be employed by both attacker and defender, reveals a system quite unsuited to most realistic defensive contingencies in South Korea.

South Korea is a relatively small area. Seoul, home to more than a quarter of the population, lies only about 40km from the North Korean border. THAAD, meanwhile, is designed for high-altitude intercepts on either side of the earth's atmosphere, meaning that it is optimized mostly to defend against medium- and intermediate-range ballistic missiles. Here's the dilemma: the North Korean missiles which THAAD is best suited to defend against are unlikely to be used against South Korea; at the same time, THAAD would be of little or no use against the short and tactical-range ballistic missiles most likely to be employed against the South, particularly against the strategically valuable areas of Seoul and its environs.

This dynamic is illustrated most starkly in relation to the threat posed by North Korea's long-range missiles (including the kind launched last week). It was this threat, after all, which has ironically catalyzed the decision in Seoul to accede to the deployment. North Korea's long-range missiles are completely unsuited for use against South Korea; just as THAAD is manifestly incapable of dealing with intercontinental-range missiles. The Korean Peninsula is only 1,100km long, whereas ICBMs have a range in excess of 5500kms. For Pyongyang, this would make less sense than Qantas buying A380s to service the route between Canberra and Sydney.

Moreover, such missiles are expensive, incredibly difficult to produce, and available to North Korea only in very small numbers. They are, consequently, not for use 'in-theatre', but rather need to be understood as the backbone of North Korea's emergent nuclear deterrent against the United States. Indeed, even if such a missile targeted at the U.S. homeland was to be intercepted from South Korea, it would need to occur within about one minute, while the missile was in its boost phase. To date, no BMD system has that capacity, least of all THAAD, which is designed for high altitude intercept in a missile's terminal phase.

A more compelling case may be made for the deployment of THAAD to defend the more sparsely inhabited southern reaches of South Korea against North Korean medium-range ballistic missiles. But even here the costs to U.S. taxpayers, at almost $1 billion per battery, are set unfavorably against other cheaper, more available options—especially given the relatively low value of this area as a North Korean target.

Given the limited practical utility of THAAD for inter-Korean contingencies, then, why is it now being discussed with such vigor?

In one sense, as Rod Lyon points out, this discussion reflects the paucity of meaningful options available to Washington and Seoul in dealing with the North Korean threat. Absent any good option, Washington feels obligated to make a largely symbolic act in order to be seen to 'do something' to reassure its allies. Seoul, cognizant of THAAD's limited usefulness but eager to reassure the South Korean people, has little choice but to settle for this.

The other explanations relate to China. As Beijing suspects, Washington is most likely taking advantage of North Korean bellicosity to create a useful pretext to begin deploying sensors along China's periphery. While THAAD isn't likely to be much use in North Korean contingencies, it would be better suited to blunting limited Chinese missile attacks, which would necessarily be launched from further afield. Perhaps more importantly, its radar system could also be used to complicate Chinese plans elsewhere in East Asia.

For both Seoul and Washington, there is a certain coercive logic that underpins this strategy. Each of them, at various times, have sought to outsource the North Korean problem to China. Each has made significant concessions to Beijing in the tacit expectation that China would use its presumed leverage to inhibit Pyongyang. And each time, those hopes have been dashed by a new round of North Korean provocations, followed by Chinese diplomatic soft-peddling. Having tried the carrot with Beijing and failed, they are now trying the stick in the form of a X-band radar.

Raoul Heinrichs teaches international politics and security at the Strategic and Defence Studies Centre, Australian National University. He is a former a Sir Arthur Tange Scholar and Lowy Institute research associate. This article first appeared in the Interpreter.