THAAD and Thucydides: Seeing the Forest Beyond the Trees 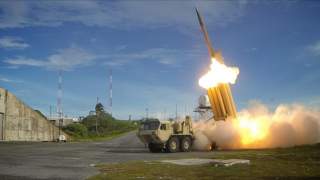 Since the July 7 announcement by the U.S.-Korea alliance to deploy the Terminal High-Altitude Area Defense (THAAD) system on the Korean peninsula, analysts and commentators have been discussing whether and how Beijing would retaliate against Seoul and whether the decision would lead to a dangerous arms race between the United States and China. These are important questions, but Thucydides might say that they are also missing the forest for the trees. By itself, the THAAD controversy is not a make-or-break issue in China-South Korea relations or in the U.S.-China arms race dynamics but is simply one symptom of broader trends, namely the growing U.S.-China competition in Asia and the evolution in strategic military technologies.

To begin with, there is the underlying geopolitical context. The THAAD decision would not be so controversial, if not for the current state of U.S.-China relations defined by increasing tensions and deepening mistrust. Deploying THAAD in South Korea would not jeopardize the effectiveness of China’s nuclear deterrent since the system is meant to intercept short to intermediate-range ballistic missiles during their terminal phase, but not during their boost or mid-course phase. THAAD in South Korea cannot block Chinese missiles traveling toward the United States. Moreover, Washington and Seoul have repeatedly assured a paranoid Beijing that they plan to use THAAD in “terminal mode” to deter and defend against Pyongyang’s missile capabilities, instead of using the system in “look mode” to scan deep into Chinese territories.

Yet, it is clear that Chinese political analysts view the THAAD issue through the lens of broader geopolitics, particularly in the context of the U.S. rebalance to Asia. Chinese commentaries often argue that the United States is using THAAD to “drive a wedge” between China and South Korea in order to bring a reluctant Seoul into a U.S.-Japan-South Korea coalition to contain China. This suspicion is bolstered by the fact that many Chinese observers see THAAD as having questionable utility in countering North Korean threats to the Seoul metropolitan area, which is home to approximately half of South Korea’s population and is mere twenty to thirty miles from the demilitarized zone. In any case, the planned deployment of THAAD will not cover Seoul. Many in the United States, too, are treating this issue in geopolitical terms, arguing that China is opposing the deployment of THAAD to “wedge itself between South Korea and the United States” or to “establish a precedent for its ability to influence the security decisions of its neighboring countries.”

What the political debate and quarrel over THAAD really reveal is the extent to which the United States and China are beginning to treat an array of regional and functional issues in Asia in zero-sum terms, intentionally or unintentionally, as tensions and mistrust between the two sides increase. One should remember that there was a similar controversy over the China-led Asian Infrastructure Investment Bank (AIIB). The United States, despite its later public stance, waged a quiet, but intensive campaign to dissuade important allies from joining the project—a mistake that some analysts noted was “knee-jerk antagonism,” similar to China’s “knee-jerk” reaction against the decision by the United States and South Korea to deploy an advanced missile defense system at China’s doorstep. In the end, fifty-seven countries, including the United Kingdom, Australia, and South Korea, joined the AIIB as founding members. The episode was another instance in which a seemingly unrelated issue was viewed through a zero-sum lens within the context of the U.S.-China struggle for influence in Asia.

The THAAD controversy should be understood in the same context in the sense that it is an ominous symptom of deteriorating U.S.-China relations. China-South Korea relations will also suffer, but only to a degree. Beijing might or might not retaliate in meaningful ways against Seoul, but the dispute, by itself, does not mean that the bilateral relationship will be destroyed “in an instant,” as Qiu Guohong, Chinese Ambassador to South Korea, warned. This does not mean that the THAAD decision has no implication for Chinese interests; Beijing has understandable, if unjustifiable, reasons for being concerned, but it is more important to understand this issue in terms of slow-moving geopolitical trends. In fact, there will likely be more controversies based on other issues if U.S.-China relations continue to deteriorate. Some of such issues might have concrete implications in the bilateral relationship, and some might not, but their relative importance will ultimately depend on the overall mood of U.S.-China relations at the time.

The THAAD row is also a symptom of the continuing evolution of strategic military technologies. The United States has been developing conventional prompt global strike capabilities in order to “precisely strike time-sensitive, high value targets” anywhere around the globe within an hour while developing missile defense systems to counter “potential limited intercontinental ballistic missile (ICBM) attacks from states like North Korea and Iran.” China has shown acute sensitivity to these developments since the Chinese nuclear doctrine of assured retaliation, as noted by M. Taylor Fravel and Fiona S. Cunningham, relies on “the smallest possible force capable of surviving a first strike and being able to conduct a retaliatory strike that would inflict unacceptable damage on an adversary, at the time and place of China’s choosing,” as Beijing, generally speaking, adheres to a no first-use policy. China has adopted this doctrine instead of engaging in a costly arms race because of the country’s relative technological and economic inferiority to the United States and because economic growth remains a critical pillar of the Chinese Communist Party’s regime security. Some commentators, however, are concerned that the deployment of THAAD could push Beijing to begin a dangerous arms race.

The reality is that a creeping technological arms race has already been underway for some time; the Chinese have long been concerned about U.S. efforts to improve precision-guided munitions and ballistic missile defense systems. China fears that the United States might gain the strategic upper hand if U.S. missile defense systems develop to become capable of intercepting Chinese retaliatory capabilities after they absorb a first or precision-strike. In response, the Chinese have already introduced a degree of ambiguity into their no first-use doctrine and have been improving their nuclear arsenal by developing its nascent submarine-based nuclear deterrent, multiple independently targetable reentry vehicles (MIRVs), and hypersonic glide vehicles (HGVs). China is developing HGVs with the very intent of penetrating U.S. ballistic missile defense systems. In response to this and other similar developments, the United States is considering countermeasures, such as high-power airborne directed-energy weapons (lasers) and a modified THAAD system with an extended range (THAAD-ER). The current THAAD controversy is only one element of this dynamic.

Therefore, while deploying THAAD will cause concerns in Beijing, the system is not a make-or-break issue that will prompt the Chinese to start or accelerate a large-scale arms race, particularly because Beijing still considers economic development to be an important priority. One of the (selective) lessons that the Chinese Communist Party has learned from the collapse of the Soviet Union is that engaging in an arms race with the economically and technologically superior United States is a bad idea. Instead, Beijing will likely respond by further adjusting and calibrating their nuclear doctrine and capabilities to counter whatever strategic advantages that Washington is perceived to have gained. This might mean increased military tensions and growing strategic uncertainty, but it does not mean an all-out arms race.

Grasping these broader dynamics requires stepping back from the individual trees to appreciate the entire forest. Specific details with regard to how the THAAD deployment would affect China-South Korea relations or the U.S.-China strategic stability dynamics are important, but they are also mere symptoms of wider structural trends. The real story here is that mistrust between the United States and China, caused by the shifting balance of power in the western Pacific, has placed the THAAD and other regional issues in a zero-sum context, while evolving technological trends are causing heightened security dilemmas in the region. Take one more step back, and one might notice that this is all part of the age-old phenomenon called the Thucydides Trap, the classic conflictual dynamic between an established power and a rising rival, and that everyone is simply an unwitting pawn playing the same old tune of history.

Sungtae “Jacky” Park is research associate at the Council on Foreign Relations.