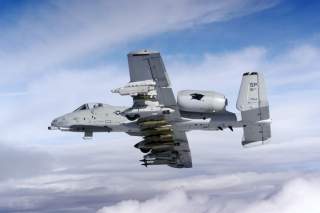 The U.S. Air Force delayed its plans to retire the A-10 Warthog in favor of the Lockheed Martin F-35 Joint Strike Fighter. The service has been trying to scrap the venerable flying tank—a darling of U.S. ground troops—in favor of the stealthy single-engine jet despite resistance on Capitol Hill by 2021.

“We have to retire the airplanes, but I think moving it to the right and starting it a bit later and maybe keeping around the airplane a bit longer is something that's being considered based on things as they are today and what we see in the future,” Air Combat Command commander Gen. Hawk Carlisle told reporters at the Defense Writers Group breakfast according The Hill reporter Kristina Wong. “I think if you look at what we'd like to do is probably a couple of squadrons maybe early, because we have F-16s coming out of Hill [Air Force Base], and we'd like to transition A-10s to F-16s in a couple of different places, but I think the majority of it we would move it a couple of years, two to three years, to the right.”

Carlisle told reporters that he deployed the jets to Turkey because of their unique capabilities which are particularly useful against enemy ground forces—like ISIS. “I will tell you, I have A-10s and I will use them because they are a fantastic airplane.” Carlisle said. “The guys are incredibly well-trained and they do fantastic work in support of the joint war fight...They're doing fantastic work and we're very proud of them.”

Congresswoman Martha McSally (R-Ariz.), a former Air Force A-10 squadron commander, was dismissive of the service’s latest move. McSally has often spoken out about the capabilities gaps the Pentagon would face if the A-10 were retired. “As it has always been, the plan to retire the A-10 ahead of schedule is irresponsible and reckless. No plane in our inventory or under development can match the A-10’s unique capabilities to provide Close Air Support – capabilities that are in increasing demand,” McSally said in a statement. “A-10s are now deployed in the fight against ISIS, in Europe to deter Russian aggression, and along the border with North Korea. We just invested over $1 billion to keep this asset flying until 2028. Until there’s a suitable replacement, we absolutely need to keep this life-saving capability in the air.”

McSally dismissed Carlisle’s move to defer the A-10’s as a political ploy. “This is the Administration’s same ploy only in a different disguise to whittle away at a critical capability, “ she said. “Over the last three years, the Administration has already mothballed the equivalent of four A-10 squadrons, leaving us with only nine to carry out the critical missions for which the A-10 is best suited.”