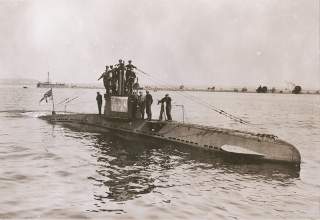 In the early days of the First World War, when German U-boats first demonstrated they could sink British ships, the British quickly discovered they had a problem.

They didn’t have a weapon that could sink submarines.

If the sub were spotted sailing on the surface, it could be sunk by gunfire or rammed by a surface ship that would tear a hole in the sub’s watertight hull. But what about U-boats that were underwater? In World War II, a destroyer would just lay down a carpet of depth charges. But in 1914, depth charges were a new and primitive invention (as were submarines). A surface ship might carry only six depth charges, rather than the 30 or so of a Second World War destroyer. That didn’t leave much spare ammo for hunting a U-boat.

So what weapons did the British come up with to sink subs? An explosive spear.

Or more accurately, a wooden spear with an explosive charge that would be hurled at a sub like fishermen spearing a fish. The Lance Bomb was a “conical thirty-five to forty-pound steel container fitted to a five-foot wooden shaft,” according to writer Fraser McKee. “Activated by pulling a Mills grenade [hand grenade] pin, which provided ten seconds in which to toss the contraption at the submarine, four of these were fitted in racks on trawlers and drifters. The same device was adopted initially by the United States Navy in 1917 and by the Turks at the Dardanelles to destroy trapped E-Class RN [Royal Navy] submarines, using an impact fuse.”

Charles Domville-Fife, writing in 1919 just after the war was over, described Lance Bombs as “conical explosive bombs on the ends of broom handles! A strong man could whirl one of them round his head, like a two-handed sword or battle-axe, and, when the momentum was sufficient, hurl it over the water for about seventy-five feet. On nose-diving into the water and hitting the hull of a submarine in the act of rising or plunging, the little bomb, containing about 7 lb. of amatol, was exploded by contact.”

How much damage was inflicted depended on what part of the submarine the explosive spear hit, according to Domville-Fife, who notes that the advent of U-boats with armored conning towers made the Lance Bomb ineffective. On the other hand, even a small fishing boat pressed into service as a warship could use an explosive spear, given a crewman with a strong enough arm.

I’m not sure how many U-boats were sunk by spearfishing, though it is unlikely to have been many. However, Britain’s Imperial War Museum, which has a Lance Bomb in its collection, describes how a fishing boat used the weapon to help sink a U-boat as late as 1916: “On 24th April 1916, during the laying of the first Belgian coast barrage, the drifter ‘Gleaner of the Sea’ was at anchor off Walcheren with her indicator nets astern. The crew saw a submarine foul the wire cable of the anchor. The skipper, R G Hurren, threw a lance-bomb on the foredeck, causing a great explosion, which certainly disabled the submarine (U.B.13) and caused it to go to the bottom, where it was afterwards destroyed.”

Not recorded is whether Britain ever experimented with antisubmarine harpoons. Imagine the fun of trying to lasso a U-boat.