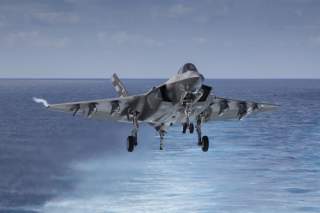 American air power is critical to mission success – it provides precision strike, rapid logistics, detailed reconnaissance and air dominance while denying those advantages to adversaries. It is essential that the U.S. continue to advance its air power to outpace future threats. One way the Air Force Research Laboratory is supporting the improvement of air power is by investing in revolutionary propulsion technology with the Adaptive Engine Transition Program (AETP).

The Adaptive Engine Transition Program aims to transform the performance of jet engines by designing and testing multiple 45,000-pound-thrust turbofan engine prototypes. The program’s goal is to improve the engine’s fuel efficiency by 25 percent, increase the thrust by 10 percent and reduce engine heating. Improving jet propulsion allows for more sorties to be accomplished with greater range using the same amount of fuel.

Today’s fixed-cycle military engines have two spools of air and are capable of either maximum power or fuel efficiency.  AETP aims to add a third stream of cooled air around the outside of the engine that can be opened or closed to switch from fuel-efficient mode to high-performance mode and back again as the need arises. As a result, the new motors, called variable cycle or adaptive cycle engines, will be able to switch between functioning as a turbojet with high velocity thrust for supersonic performance and the lower speeds of airliner engines designed to reduce fuel consumption.

Contracts were awarded this year and work on the program will continue through 2021 when the Air Force is expected to select a winning engine design. The three-stream engine technology is considered critical in developing the Air Force’s sixth-generation fighters, likely to replace F-22s and F-35s, and meeting the Navy’s F/A-XX needs for high speed and long endurance. Whether these future aircraft will have a single or dual engine is not certain at this time, but the three-stream concept will be scalable across a wide thrust range. AETP allows for plenty of testing, which means the technology will be mature when the program enters advanced development.

The adaptive engine cycle could be included in the F135 engine that powers the F-35 joint strike fighter fleet. The current F135 engine generates 28,000 to 43,000-pounds of thrust, which means the engine has to run at high temperatures to generate maximum power. If the engine were able to cool itself, as the three-stream engine technology aims to do, the fighter would have more capability without sacrificing power. Utilizing the variable cycle engine could be easier and less expensive than creating a brand-new engine from scratch.

Future Air Force needs could also benefit from the technological advances resulting from AETP. For instance, AETP may allow for a smaller platform with less fuel onboard. This translates into less weight on the aircraft and an increase in maneuverability and range with a reduced price-tag. The new engine also would decrease tanker dependency and provide up to three times more target coverage in anti-access/area denial (A2/AD) environments – more target coverage is critical as potential adversaries are improving their capabilities.  Other applications for adaptive cycle engines include bombers and attack aircraft.

Air power is and will remain a key ingredient to mission success. The Adaptive Engine Transition Program will boost the effectiveness of air power by increasing capability and efficiency while saving money. New technology, like the AETP, will allow air forces to accomplish military objectives while negating threats and saving lives through precision and finesse rather than brute force.