The Age of Strike Carrier Is Over 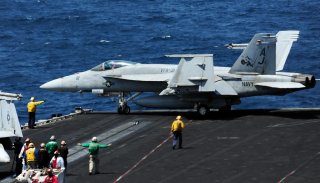 The age of the strike carrier is over. As the United States enters an era where the potential for modern great-power war is increasing dramatically in Eurasia, a return to the traditional roles of the aircraft carrier is required to maintain maritime access. Carrier-borne over-land strike warfare has not proved decisive in previous conflicts in heavily contested air defense environments, and will not prove so in the future. In the potential high-end conflicts of the twenty-first century, the likely utility of carrier-based land strike is largely non-existent. Thankfully, the traditional carrier aviation roles of maritime interdiction and fleet air defense remain highly valuable in wars against modern navies, but are precisely the roles, missions, and tactics sacrificed for sea based over-land strikes over the past sixty years. Regaining this capability will require a modest investment in existing and developing systems and capabilities and should be the force’s, the service’s and the nation’s highest objective in the coming years.

American carrier airpower received its combat indoctrination in the Pacific War. However, pollution of the history of that campaign by naval aviation and airpower enthusiasts caused the lessons of that war to ossify over time. During Fleet Admiral Chester W. Nimitz’s campaign aircraft carriers and their air wings almost exclusively provided maritime interdiction and fleet air defense. There are three major exceptions to this rule; Doolittle’s raid, the offloading of the Enterprise air group to Henderson Field during the Solomon Islands operation, and the strikes against the Japanese redoubts and the home islands late in the war. Additionally, carrier air forces provided strikes to Marine landings and naval aviation supported the Army landings of MacArthur’s campaign, most famously at Leyte. Admiral Kinkaid’s light carriers supported much of this effort, as well as Vice Admiral William F. Halsey’s and Raymond Spruance’s fast carrier task forces of Third and Fifth Fleets.

Doolittle’s raid, a strategic success due to its propaganda value, did not obtain any operational or theater-strategic gain, provided no notable hindrance to the Japanese war effort, and was conducted with US Army Air Corps (USAAC) B-25 Mitchell aircraft. Only the USAAC aircraft possessed the combination of ordinance load, endurance, and thrust to make the adventure over the Japanese home islands possible, even as a publicity stunt.

When the Enterprise disembarked her air group to Henderson field, her aircraft provided valued support to the Marines fighting their way across Guadalcanal and to American naval forces fighting for sea control in Iron Bottom Sound. During the campaign, the major value of those aircraft remained air defense and anti-surface warfare. The Enterprise air group made combat air patrols, searched Iron Bottom Sound during daylight, and engaged any Japanese ships unfortunate enough to find themselves in range in daylight. The Enterprise air group’s combat air patrols made daylight resupply of Japanese Army units impossible, a sea control, anti-surface warfare capability. While the air group could not provide enough firepower accurately enough to dig the Japanese out of the jungle by themselves, it successfully isolated the battlespace to allow the Marines to do their work as it controlled the approaches to Iron Bottom Sound.

After Midway and the Solomon Islands campaigns, American carrier air power did begin to conduct some overland strike, mostly in the form of raids on enemy bases, but the fast carrier task forces remained focused on fleet air defense and anti-surface warfare. This alludes to the fact that, despite its ailing naval forces, Japan’s air and surface units still represented a potential threat to the American war after 1942. This was true as long as they possessed the capability to conduct a highly destructive strike against American fleets.

Leyte Gulf totally destroyed this capability and thereafter American carriers began wholehearted support of major fleet landings. However, in these endeavors they posted a mixed record, being unable to provide enough ordinance precisely enough to make the Marines’ tasks much easier as they tried to advance over hard volcanic rock on Iwo Jima and the difficult terrain and defense in depth on Okinawa. Indeed, in these campaigns, American carrier air power’s signature achievement proved the destruction of the Japanese Yamato super-battleship, not any air-to-ground ordnance delivery.

The history of the Second World War has been polluted by naval aviation, claiming the conflict as the age of the aircraft carrier. This stands almost no historical scrutiny. The campaign hung in the balance in the Solomons as much as Midway or Coral Sea, with no U.S. carriers available.  Moreover, battleships proved highly useful throughout the war with their extensive anti-air armament and state-of-the-art radars providing close-in air defense for task forces. The Pacific War’s history is much more nuanced than naval aviation enthusiasts give credit for, and at its conclusion, not the carrier but the aircraft carrier task force proved to be the central weapon of war, with naval aviation posting meager results in ground support or strategic land strike.

What commonly became known as the “strike” aircraft carrier (CVA) was, in fact, the atomic carrier. In a memorandum as assistant Chief of Naval Operations for guided missiles, Rear Admiral Daniel V. Gallery opined that the U.S. Navy could strike more flexibly, as effectively, and at less cost than land-based, atomic-armed bombers requiring local bases to launch their fighter escorts. Gallery’s motivation was at least partially parochial. The newly-formed U.S. Air Force was, at the time, attempting to cultivate a monopoly on all nuclear strike planning. In the era as the only nuclear superpower, it seemed nuclear delivery would prove the best option for continued longevity of the U.S. Navy’s fleet. In this effort, the Navy reconfigured attack carrier air wings to deliver Navy special weapons. This reconfiguration was the first time a carrier air wing was doctrinally tooled for ground attack and strategic strike, vice the sea control disciplines of fleet air defense and anti-surface warfare. Over time, this strike carrier became the norm. Rather than provide value to the fleet, misperceptions of the efficacy of land attack caused the platform’s gradual devolution from a system that provided capability to the task force to a platform that sucked capability from it. With its air wing largely servicing land targets, the strike carrier now required the very anti-surface, anti-submarine, and anti-air capabilities it used to augment, to allow more substantial (although increasingly less effective) overland raids.

This strike configuration premiered during the Korean War. The Peninsula lacked a sophisticated air defense or early-warning system and communist forces only contested air superiority in Mig Alley on the western Sino-Korean border. Therefore, naval and Marine aircraft operating off of carriers did produce notable results in ground support. However, given the limited nature of the conflict, the austere environment of the peninsula, and the technical lack of sophistication of Chinese and Korean forces, it is hard to determine the overall effect of carrier air power. At any rate, whatever the tactical, operational, or strategic limitations imposed, the conflict ended inconclusively, whatever naval aviation’s record.

Likewise, the utility of the attack aircraft carrier proved mixed over Vietnam. During the Vietnam War, the communist North enjoyed competing Chinese and Russian military (as well as diplomatic and political) support. The Soviets provided a totally linked and integrated air defense network around vital areas including Hanoi and Haiphong Harbor, the two most strategic areas. This air defense system proved too dense and advanced for American carrier-launched aircraft to reliably penetrate and deliver ordinance. Indeed, during Operation LINEBACKER II, only B-52Ds with their improved Electronic Countermeasure (ECM) packages, proved able to operate in the zones. This represented a failure of American carrier air power. If the multiple aircraft carriers operating in the Gulf of Tonkin could not reliably penetrate North Vietnamese air defenses, what chance did they have off the Kola Peninsula or the Baltic?

Despite an air defense network similar to that installed over Hanoi, U.S. Naval Aviation contributed, but did not prove decisive in Desert Shield and Desert Storm. While fixed-wing, fast moving aviation assets provided impressive combat support, it took US Air Force F-117 Nighthawks, cruise missiles, and Air Force delivered precision munitions to penetrate the Iraqi air defense screen. Naval air forces proved totally unprepared for the precision munitions revolution, lacking laser target designators on the A-6s and A-7s that still formed the mainstays of the fleet. Instead, most naval aviation delivered Mk 80 series unguided weapons instead of the Paveway series featured by a small but growing section of Air Force platforms, including the Nighthawk. This made them incapable of delivering ordinance to targets with high risk of collateral damage and precluded many targets in Iraqi population areas, limiting the force’s contributions to the campaign to tactical and some operational strikes.

In the Balkan Wars and later in Iraq and Afghanistan, American naval aviation never again faced an integrated air defense system. High hard decks precluded the efficacy of man portable surface-to-air rounds and obsolete mobile systems made air defense suppression a forgone conclusion rather than an aspirational goal in the early 2000s. Naval aircraft, belatedly modernized to take full advantage of the precision munitions revolution, delivered substantial amounts of ordinance in these conflicts, complementing American land-based air power. However, the aircraft lacked on station time and payload, showcasing a service preference for multi-role fighter-bombers with limited range vice the ultra-long range fighter and attack aircraft required for intercept and long-range anti-surface warfare. However, confronted with a total lack of modern air defense systems, they, like the Air Force, reigned supreme.