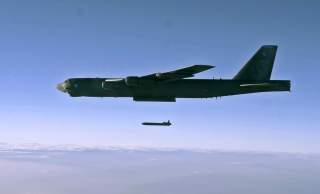 US Air Force weapons developers plan to begin a new phase of construction and development for the emerging Long-Range Standoff Weapon in 2022, a move that will bring a new nuclear-armed, air-launched cruise missile closer to operational status amid fast-growing global nuclear weapons tensions, service officials said.

Due to emerging nuclear weapons threats, the Air Force now envisions an operational LRSO by the end of the 2020s - as opposed to prior thoughts that it may not be ready until the 2030s.

“The decision to move into the Engineering and Manufacturing Development phase is on track for 2022,” Maj. William Russell, Air Force spokesman, told Warrior Maven.

Early prototyping and design work is already underway with Air Force industry partners, Raytheon and Lockheed, now working on a $900 million Technology Maturation and Risk Reduction deal with the service.

“The Nuclear Posture Review reaffirms LRSO is critical to the airborne leg of the nuclear triad, and "...will maintain into the future the bomber force capability to deliver stand-off weapons that can penetrate and survive advanced integrated air defense systems, thus holding targets at risk anywhere on earth,” Russell said.

The LRSO will provide an air-launched component to the Pentagon’s current wish to expand the attack envelope possibilities for its nuclear arsenal; the NPR calls for the addition of a new low-yield submarine-launched nuclear armed cruise missile. The move is described by Defense Secretary James Mattis as an effort to further deter potential Russian aggression and bring them back into compliance with the INF Treaty.

A cruise missile armed with nuclear weapons could, among many things, potentially hold targets at risk which might be inaccessible to even stealth bombers, given the growing pace at which modern air defenses are able to detect a wider range of aircraft - to include the possibility of detecting some stealth bombers.

As a result, senior Air Force leaders continue to argue that engineering a new, modern Long-Range Standoff weapon with nuclear capability may be one of a very few assets, weapons or platforms able to penetrate emerging high-tech air defenses. Such an ability is, as a result, deemed crucial to nuclear deterrence and the commensurate need to prevent major-power warfare.

The LRSO will be developed to replace the aging AGM-86B Air Launched Cruise Missile or ALCM, currently able to fire from a B-52. The AGM-86B has far exceeded its intended life span, having emerged in the early 1980s with a 10-year design life, Air Force statements said.

Unlike the ALCM which fires from the B-52, the LRSO will be configured to fire from B-52 and B-21 bombers as well, service officials said; both the ALCM and LRSO are designed to fire both conventional and nuclear weapons.

Despite some earlier discussion about the weapon being integrated into the B-2 bomber, Russell said there are no current plans to arm the B-2 with the LRSO at the moment.