The Air War Against ISIS: The Deciding Factor 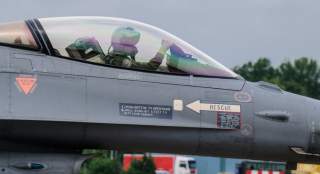 On the first night of airstrikes against ISIS in Syria, U.S. warplanes were not alone. They were accompanied by several others in the anti-ISIS coalition, including fighter aircraft from Saudi Arabia, Bahrain, Qatar, Jordan, and the United Arab Emirates (UAE). This is a big deal.

Over several decades, the United States has provided advanced equipment and world-class training for partner nations, including the five mentioned above. These investments have been controversial at times, but now they are having significant payoffs. The continued participation of Middle Eastern states in anti-ISIS operations is crucial for their long-term success, and it has far-reaching implications for U.S. leadership throughout the world.

With U.S. help, these air forces have made tremendous progress. Countries such as Saudi Arabia, Bahrain, and the UAE have purchased very capable aircraft from the United States. UAE F-16s, for example, are superior in many respects to the United States’ legacy F-16s. In addition to providing advanced equipment, the United States has encouraged participation in the most realistic training exercises, including the flagship Red Flag exercise in Nevada (where I had the opportunity to observe U.A.E. training personally).

Another major development is the Gulf Air Warfare Center in U.A.E., which has grown steadily since its establishment in 2000 to become a leader in tactical training. Its “Iron Falcon”exercise comes complete with dedicated aircraft that act as the enemy, excellent planning and briefing facilities, and tracking and debriefing technology that allows the participants to visualize how the battle unfolded—and identify what they could do better.

The payoff for these investments came last month when Middle Eastern air forces participated in airstrikes against ISIS in Syria. As a U.S. Air Force weapons and tactics instructor, I have helped to plan numerous raids and strikes similar to this one. Prior to my experiences with partner nations at Red Flag, I would have argued against having them participate on a first-night strike where precise execution is critical for both safety and mission accomplishment. I simply would not have trusted the Middle Eastern air forces to be where they were supposed to be.

My opinion of them changed as I watched their growth in realistic training scenarios. These air forces prepared well in peacetime, and when war came, they were ready. They have acquitted themselves well against ISIS, and their performance shows how much progress they have made since partnering with the United States.

Solid tactics cannot win wars in the absence of good strategy; this is another reason why these nations’ participation is critical. If we are to “destroy” ISIS, it will not be accomplished with military power. Instead, the ideology that fuels ISIS must be soundly rejected by people around the world, and most importantly, it must be disavowed by Sunnis in the Middle East. Having adherents of Sunni Islam participate in attacking ISIS sends a powerful message to the rest of the Sunni world that the teachings of ISIS are flat wrong. It also sent a message to others that Middle Eastern countries are willing to stand against ISIS, making it much more palatable to join a coalition that has now grown to over forty members.

As they participate in operations against ISIS, Saudi Arabia, Qatar, Bahrain and the UAE are also sending a very important message to Iran, their neighbor across the Gulf. These countries now have very credible air defenses—in many ways superior to Iran’s—that are interoperable with western countries such as the United States and France, as well as with each other. This creates a powerful balancing effect in the Gulf, one that works to stabilize the world economy.

This success also enhances U.S. credibility with our allies and potential partners. As we look forward to an increasingly interconnected world where instability in far-flung places can have global implications, developing effective partnerships is crucial, because the United States cannot be everywhere all the time. Over years of building partnerships around the globe, we have proven that the U.S. is a good “friend.” This year, U.S. Airmen have helped to increase the capabilities of air forces around the globe, including in exercises such as Max Thunder in Korea, Commando Sling and Pitch Black in Australia, Red Flag-Alaska in the Pacific, and the Tactical Leadership Program in NATO. In addition, the main Red Flag program in Nevada continues to host our partners. These programs have developed positive momentum, and they are working well.

Finally, several press reports highlighted the fact that the UAE flight leader on the first night of airstrikes was female. This brings up a more subtle point: it is not inconsequential that UAE military leaders have watched female fighter pilots from the United States perform on an equal level with their male counterparts in demanding training scenarios. Every time a member of the U.S. military interacts with our partners, it provides an opportunity to influence them for good. Our people provide living examples of how a professional military can show deference to civilian leaders, provide opportunities for its members, and treat all with dignity and respect. This potent combination of hard and soft power works to lift up others, which is both in our self interest and the right thing to do. We need to keep doing it.

Colonel Clint Hinote, U.S. Air Force, is a military fellow at the Council on Foreign Relations. He holds a PhD in military strategy, and he recently returned from Korea, where he commanded the 8th Fighter Wing at Kunsan Air Base.  The conclusions and opinions expressed are his own and do not reflect the official position of the U.S. government.