The 'Alligator': This Russian Helicopter Is Coming to the Middle East 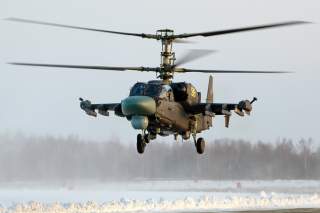 Russia’s lethal-looking Ka-52 attack helicopters have reappeared in video footage blasting targets in Syria—catching some journalists in Europe by surprise. Even if Russia withdraws the agile attack helicopters, the type will remain active in the Middle East in Egyptian service.

The lean, two-seat Ka-52 is visually distinguished by its pronounced nose, and is fittingly dubbed the “Alligator.” The nimble, ultra-maneuverable scout/attack helicopter uses two three-bladed contra-rotating rotors for stability so that it can go without a lag-inducing tail rotor, allowing the helicopter to soar at up to 196 miles per hour, nearly 20 percent faster than an Apache. According to Russian media, unlike the more heavily armored Mi-28N “Havoc,” the Alligator can both glide like a plane and pivot ninety degrees on the spot.

Indeed, when NATO first learned of the Alligator’s predecessor, the single-seat Ka-50 Black Shark, it was assumed to be a purpose-designed antihelicopter platform for chasing down American gunships! This was not really the case: though the Ka-50 and Ka-52 (NATO codenames Hokum-A and -B) reportedly can mount deadly R-73 heat-seeking air-to-air missiles, the helicopter’s primary mission is reconnaissance and ground attack.

Thirty-two Ka-50s served as prototypes in the 1990s and 2000s, each configured differently from the previous model. In 2001, a few Black Sharks launched rockets and laser-guided missiles strikes on Chechen insurgent camps. Later in the decade, the Russian Air Force finally ordered more than 146 of an upgraded two-seater version, the Ka-52, of which ninety-four were delivered by the end of 2016.

In January 2016, as Moscow announced it was “withdrawing” its air force from Syria, it dispatched a contingent of a Ka-52 attack helicopters which began air strikes on Syrian rebels and ISIS fighters.

In April 2016, the first recording of the type emerged in action, blasting ISIS forces in al-Qaryatayn with unguided rocket pods. Some accounts claim they were dispatched on as many as five sorties a day.

Reflecting their role as a reconnaissance platform, the Ka-52s were also reported to be using their laser-targeting systems to cue in air strikes by more heavily armed Su-25 Frogfoot ground attack jets. They reportedly played an important role in driving ISIS forces from Palmyra in the winter of 2016–17.

Another video, dated at August 2017, shows them employing laser-guided missiles to destroy transports and tanks. Around this time they were reported to have conducted air strikes in support of Syrian paratroopers seizing the town of al-Hader in Homs Province.

And for a good measure, during the enormous Zapad 2017 military exercise, a Ka-52 gave spectating journalists a terrifying up-close demonstration of the effects of a rocket-pod barrage.

Fortunately, nobody was killed. The Western military district explained that the Alligator had “erroneously locked on a wrong target.” You can see the camera footage from the Ka-52 in question here.

Unlike the heavily armored Mi-24 Hind helicopters, which are expected to wade in closer to the action, the Ka-52 is intended to pick off enemy armored vehicles from as far as five miles away using up to twelve laser-guided 9K121 Vikhr (“Whirlwind”) antitank missiles, or Kh-25ML air-to-ground missiles. These exceed the range of man-portable surface-to-air missiles like the Stinger, save for possibly the latest model. However, the Alligator’s FH-01 Arbalet ground-surveillance radar is mounted in its nose, meaning that it must expose its entire airframe while scanning for targets, unlike the Mi-28N and AH-64, which have a radar mounted atop the rotor that can “peek” above hills or trees. The Arbalet has a ground search range of fifteen miles.

These Ka-52’s weapons are mounted on six hardpoints slung under the stub wings, which can also accommodate bombs and rocket or gun pods. In addition, there are flare and chaff dispensing pods on the wingtips to decoy enemy missiles, and a fixed thirty-millimeter 2A42 autocannon under the fuselage for strafing enemy personnel and vehicles. An under-nose turret mounts an electro-optical an Forward Looking Infrared (FLIR) sensor for detection and targeting purposes.

The Alligator has also been fitted with a new electronic warfare countermeasure system, a radar warning receiver and, uniquely for a helicopter, an ejection system that blasts off the rotors before ejecting the crew. Overall, however, the Ka-52 is still generally thought to lags behind the AH-64E Apache Guardian in terms of avionics.

The Russian Navy also planned on operating naval Ka-52K choppers on Mistral-class amphibious assault carriers built by France. The awesomely named Katran (Spiny Dogfish) variant boasted folding wings and rotor blades, reinforced landing gear, anticorrosion surfaces, a more powerful naval search radar with a range of a hundred miles, and the capability of firing Kh-35 antiship missiles at targets up to eighty miles away. However, Putin’s seizure of Crimea caused Paris to ax the carrier deal, leaving Russia’s naval helicopters without a ship to embark upon. The Russian Navy will only operate a handful of Katrans, which can only deploy from the breakdown-prone carrier Admiral Kuznetsov, which has its hands full carrying other types of aircraft. Nonetheless, the Kuznetsov did combat deploy a number of Ka-52Ks durings its combat deployment to Syria in 2016.

Russia has tried long and hard to sell the Ka-52 abroad. South Korea, India and Turkey have all spurned Moscow’s Alligator-hawking advances, even though Kamov even developed a Turkish-export variant dubbed the Erdogan, which happens to share a name with the Turkish president.

In 2015 Moscow finally found a buyer in Egypt, which has been keen in recent years to signal the United States that it can purchase its weapons elsewhere if Washington insists on criticism of Cairo’s poor human-rights record. The so-called Nile Crocodile variant developed for Egypt features a reinforced hull, “tropicalized” components for Egypt’s hot, sandy climate, and significantly enhanced radar and defensive countermeasure systems.

It just so happens that Egypt also ended up purchasing those Mistral amphibious carriers from France. Therefore, Russia is also attempting to foist Ka-52K naval helicopters on Cairo, though negotiations are still ongoing.

Fifteen out of a total order of forty-six will be in Egyptian service by the end of 2017. As Cairo remains mired fighting an Islamist insurgency in the Sinai region, and is also increasingly involved in the civil war in Libya, it seems possible that the Nile Crocodiles will eventually see action. Thus the nimble Alligator gunships are likely to continue to making their presence felt in the Middle East for some time.

Image: A photo of the Kamov Ka-52 99 YELLOW​ by Alex Beltyukov. Wikimedia Commons.