The Ankara Assassination: World War III or a Flash in the Pan? 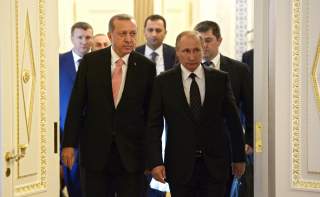 In the summer of 1914, Gavrilo Princip, a nineteen-year-old radical Serb, assassinated the Austro-Hungarian heir to the throne, Archduke Franz Ferdinand, providing the spark into a highly volatile Europe which exploded two months later into the most destructive war mankind had known to that point. Yesterday, another radical young man, twenty-two-year-old Mevlut Mert Altintas, assassinated the Russian ambassador to Turkey, Andrey Karlov. Given that Europe and the Middle East today are even more volatile than in Princip’s day, great care must be taken in how the world responds over the coming weeks.

The near-reflexive response to major events in the world today is to acknowledge they are awful, but to dismiss any concerns that they could spark larger crises. Today’s international environment, however, is not as benign as many might wish. Minimizing or dismissing the dangers posed by acts such as Monday’s assassination serve only to make the risk greater. A quick examination of initial reactions and existing fault lines underscores why this danger should be taken seriously.

First, given the immediate and authoritarian nature of the crackdown that Turkish president Recep Tayyip Erdoğan levied against tens of thousands in Turkey following the failed coup last summer, there is the potential for Turkey to overreact again. There was some indication that Erdogan used the coup to crack down on his political opponents. He must resist the temptation to do so again.

The assassination of an official of another country on one’s territory is a major matter, and Erdoğan has every right to respond swiftly, and an obligation to ensure the safety of the diplomatic corps in his country. Both he and Russian president Vladimir Putin must, however, must guard against overreaction. The region is already quite volatile.

Putin’s initial response seemed measured and appropriate. Of Karlov’s assassination, Putin said, “This murder is clearly a provocation aimed at undermining the improvement and normalization of Russian-Turkish relations.” The only response Russia will give is “stepping up the fight against terrorism,” Putin explained, and then perhaps more ominously warned that the “killers will feel it.” Others in Moscow, however, were not so diplomatic in their responses, and believed an investigation might reveal that the source of the murder was not only from Turkey, but even involved those in the West.

The editor-in-chief of Russia’s National Defense magazine, Igor Korotchenko, claimed that forces in the West were behind the attack, warning that “When they kill ambassadors, the air smells distinctly of war.” Frantz Klintsevich, the deputy chairman of the upper chamber of the Russian Parliament’s defense and security committee, added more fuel to the fire by claiming that the assassination “was a planned action” and was “highly likely . . . that representatives of foreign NATO secret services are behind it.” What his intentions may be is presently unclear, but President Putin followed up Klintsevich’s warning by explaining, “We have to know who organized this killing and gave orders to the assassin.”

Such provocative statements from Moscow will find a receptive ear in Russia, as Putin’s support is at a near all-time high, and favorability of the United States near an all-time low. Many in Russia still chafe at the insults they perceive were inflicted on them from the eastward expansion of NATO following the disbanding of the Soviet Union. Recent accusations from the United States and NATO that Russian jets were guilty of war crimes in Aleppo have only increased the anger. Meanwhile, there is rising nationalist sentiment rolling through much of western Europe against Russia.

Poland and Hungary are as strongly anti-Russia and anti-immigrant as they have been in decades. Brexit, the Trump election, and the nationalist results of the Italian referendum earlier this month have rocked much of the traditionally liberal West. Nationalist parties in France, Germany and the Netherlands are making strong showings in recent polls, and all three countries have critical elections in 2017. Many throughout the NATO countries fear Russia and blame it for the conflict still raging in Ukraine, fearing Russia might continue its aggression in the Baltics.

In such an environment, where Russia is increasingly anti-NATO and the West is growing in antagonism towards Russia, any ill-timed spark could have disastrous results for all involved. Prior to Princip’s assassination of the archduke in June 1914, the idea that a major war could break out in Europe was considered absurd. No one had anything to gain by war, but all could lose. Yet that spark nevertheless did ignite simmering tensions that thrust much of the world into horrific war.

Today conventional wisdom argues that war among major powers is again a thing of the past. The consequences for war would be so devastating that no rational leader would dare resort to it. The logic is certainly sound, but if we dismiss even the possibility that an unexpected spark could set off a fire that might later consume the West and Russia in a war, we could perversely serve to increase the chances.

We must aggressively lower tensions wherever possible, increase the use of diplomatic engagement, and minimize the use of the military instrument except in cases where it is absolutely necessary and when all other measures have been exhausted. Failure to do so might result in a conflict far deadlier and destructive than World War I.