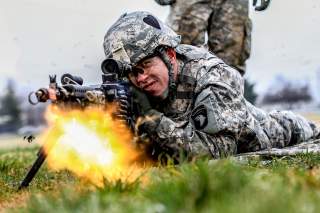 In the near future, 3D-printed squid drones could be stealthily slithering around urban battlespaces.

Seeking to overcome the limitations of existing robots and their clumsy movements, the U.S. Army Research Laboratory (ARL) has turned to nature for inspiration.

According to Dr. Ed Habtour, an ARL specialist in nonlinear structural dynamics, the army’s current robots are built using rigid mechanical and electrical elements resulting in stiff-jointed, inflexible movement. As a consequence, these robots perform poorly in confined urban environments where covert maneuvers are critical.

So researchers from the ARL teamed up with the University of Minnesota (UMN) to examine how to make drones emulate the movements of invertebrates like squid and worms.

But to move like an invertebrate, researchers first had to build flexible actuators, the device that converts electrical energy into physical motion for robots. Current actuators are largely made from stiff materials and move either rotationally or linearly.

"In the initial phase of the project, our team began by investigating new methods for emulating the locomotion of invertebrates, which provided fundamental insights into the machineries of their soft distributed actuation circuitries that allow for high bending motions without skeletal support," said Professor Michael McAlpine, who studies 3D-printing materials and devices at UMN.

Soft robotics is a nascent field and one of its biggest challenges is the development of soft actuators, but the joint ARL and UMN project made a major breakthrough. Using flexible 3D-printed materials, researchers created prototype actuators with three times greater movement than existing versions.

The prototype featured 3D-printed actuation circuits encased in soft, stretchable material that can bend in any direction when electricity is applied.

The project is still in its early stages, but researchers hope to eventually make these soft robots readily available downrange. The material does not require any additional heating, assembly, or postprocessing, so soldiers can use them in printable robots with little training.

"The research findings represent an important stepping stone towards providing the soldier an autonomous freeform fabrication platform—next-generation 3-D printer, which can print functional materials and devices—to generate soft actuators and potentially tetherless soft robots on demand, on the fly, and at the point of need," Dr. Habtour said.

The Pentagon is actively exploring the use of 3D printers on the battlefield. Given the technology’s open-ended potential, the military is considering 3D printing everything from uniforms to food, weapons or small drones. ARL researchers have even floated the concept of sending robots armed with 3D printers ahead of troops to build forward operating bases in hostile territory.

Based on current technologies, these ideas are not far-fetched. Marines are already 3D printing spare parts, and the ARL is experimenting with ways to let soldiers on the frontlines print custom-built drones designed for specific missions.

In a pilot program, researchers developed an app-store like interface that allowed soldiers and marines to select and print an unmanned aerial vehicle specifically suited for their mission. Orders were then sent to a nearby 3D printer, assembled and delivered within hours.

"I think a lot of folks are interested in additive manufacturing [aka 3D printing] because we've seen on sci-fi shows ... just walking up to a user interface and saying, 'cheeseburger,' and there's my cheeseburger," said Elias Rigas, a division chief in ARL's Vehicle Technology Directorate.

"I think that as additive manufacturing continues to grow and the technologies continue to evolve that we're going to get to a point eventually where we will be making things in a similar fashion where you will walk up to your user interface and say, 'unmanned aerial system,' and it will make it for you."

Now that app-store or interface could eventually have flexible stealthy squid drones on the menu thanks to Dr. Habtour and his team’s work.