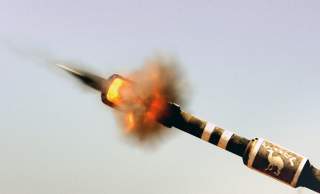 The memoirs of German soldiers in World War II often disparaged American troops by complaining that they were quick to call down heavy artillery bombardments when the going got tough. This peculiar insult underscores how liberal employment of relatively fast-reacting and accurate artillery fires were once thought of as part of the “American way of war.”

However, air power has supplanted artillery in recent decades. Compared to jets, it can take weeks to deploy heavy self-propelled artillery systems across the globe, and they demand significant logistical capacity in the field. Furthermore, the revolution in precision-guided weapons gave air power the potential to be a more precise form of warfare, with greater effectiveness for each munition released and less potential for collateral damage.

The Army’s last major attempt to introduce a new artillery system, the Crusader, was canceled for being too expensive and too heavy. Long-range Pershing tactical ballistic missiles were retired decades ago as well.

However, this trend is now in full reverse—the Army’s 2019 military budget reveals an 88 percent increase in spending on artillery systems, and especially their munitions stocks of 155-millimeter artillery shells and GPS-guided 227-millimeter rockets, which have been depleted for years. Furthermore, a March 2018 speech by Brig. Gen. Stephen Maranian at a defense symposium has outlined a wide array of new artillery systems at various stages of development for the U.S. Army.

The reason for this shift? In one word, Russia. Unlike the United States, the Russian military has never counted on having air superiority over the battlefield. For that reason, it has developed a diverse array of artillery and rocket systems, as well as long-range tactical missiles such as the Iskander, to deliver strikes the U.S. military might rely on aircraft to perform. Russian military doctrine places greater emphasis on massive bombardments, and is deeply unconcerned with the issue of collateral damage, as demonstrated by the methodical way Russian artillery flattened the city of Grozny during the Second Chechen War. Because Moscow is more focused on fighting wars along its borders—notwithstanding its recent foray into Syria—global logistics are of less concern.

Recently, the war in eastern Ukraine illustrated some of these principles, as Russian self-propelled rocket and howitzer artillery fired from across the border into Ukraine and inflicted hundreds of casualties on Ukrainian troops. Russian surface-to-air missiles also successfully denied airspace to Ukrainian jets and helicopters, so both sides were forced to rely upon artillery to hit targets behind enemy lines.

The U.S. Army’s new drive for artillery is in fact partly rationalized as a strategy to enable U.S. airpower by destroying enemy air defenses with surface-to-surface strikes. Systems like the S-400 SAM pose a major threat to U.S. warplanes, and although it possible to dismantle an integrated air defense network with air strikes, doing so requires extensive resources and meticulous planning. Therefore, improved artillery could both pick up the slack by hitting critical targets behind enemy lines while the air defenses are being suppressed, and contribute to destroying those air defenses so that air support can reach the battlefield.

Among the nearer-term projects is the fielding of the new M109A7 Paladin, the latest upgraded variant of a twenty-seven-ton 155-millimeter self-propelled howitzer in service since the 1960s. The new PIM version includes more components from the Bradley fighting vehicle, a higher-voltage power system, a more precise ramming device and better crew protection; the new vehicle will also be faster despite being five tons heavier.

However, a 2017 report by the Department of Testing & Evaluation reveals that failures of the breech system leave the 109A7 “not operationally effective.” Initial operational testing had to be suspended because “28 soldiers were affected by toxic fumes released into the cab.”

In around two and a half years the Army plans to phase in a new rocket-assisted XM1113 projectile that should extend the M109’s maximum range from the current nineteen miles to twenty-five. However, the Army is planning for an even longer-range envelope of forty-three miles by lengthening the Paladin’s six-meter long thirty-nine-caliber barrel by 50 percent.

This fifty-eight-caliber Extended Range Cannon Artillery (ERCA) is due to enter service in 2023. The new barrel is also supposed to be tough enough to accommodate potential hypersonic and ramjet rounds developed further into the future to achieve ranges as great as one hundred miles. The Army would also like to increase the Paladins’ rate of fire by installing an autoloader that could sustained bombardments of six to ten rounds per minute, many times faster than the current rate.

Ramping Up the Multiple Rocket Launchers

The Army likewise is looking to extend the reach of its multiple-rocket-launcher systems, the heavier M270 and more easily deployed M142 HIMARS. The lighter HIMARS systems have proven especially successful combating ISIS in Syria and Iraq, as new GPS-guided GMRLS rounds (with a range of forty-five miles) can deliver accurate strikes at lower cost than sending a jet to do the job. The Marines are even testing deploying HIMARS on the decks of amphibious ships for fire support.

The Army is developing an Extended Range variant of the GMRLS that can hit targets up to a hundred miles away. Currently, in addition to its standard rockets, the Army’s M270 system can launch the Advanced Tactical Missile System (ATACMS) missile, which can deliver a precision strike up to a range of 180 miles. The Army would like to create a smaller but longer-ranged Precision Strike Missile with a range of three hundred miles—and it eventually hopes to evolve it so it can hit moving targets like ships.

In this last idea we can see the Army working to establish its relevance in a conflict in the Pacific. Theoretically, it could take a page from China’s expanding network of bases in the South China Sea and deploy long-range missiles or guns on remote islands as an antiaccess/area-denial strategy for swaths of the Pacific Ocean. There is also talk of using PSM missiles as remote, loitering intel platforms.

The elephant in the room, however, is the Intermediate-range Nuclear Forces treaty which is supposed to prohibit ground-launched missiles with a range between 310 and 3,300 miles. The United States considers Russia to be in violation of the treaty with the deployment of new SSC-8 cruise missiles, and may be looking to return the pressure by developing its own equivalent weapons, justified by some farcical loophole such as deploying them on a floating barge so that they are not “land based.”

Another issue is that ATACMS originally employed cluster munitions, which are several times more deadly than conventional explosives because they rain hundreds of submunition bomblets over a wide area. However, a significant percentage of bomblets usually fail to explode, seeding the ground with deadly explosives that kill civilians well after the conflict has ended. For this reason, since 2008 the Pentagon has been under orders to restrict use of cluster munitions where possible. Presently, the Army is converting older MRL rockets to use five-hundred-pound “unitary” high-explosive warheads equipped with a proximity sensor which triggers an air burst over the target for greater lethality. It is also testing a new style of cluster munitions, which releases a shotgun-like rain of non-exploding metal rods that would remain inert upon hitting the ground.

Even further down the line, the Army is talking big with its Strategic Strike Artillery—which could involve a multicharge barrel supergun in a similar vein to the Nazi V-3 cannon, or employ rail guns or hypersonic missiles to achieve ranges well beyond three hundred miles. To be able to precisely target such systems, the Army would need stealthy reconnaissance drones that can penetrate far enough into hostile territory—and one concept is to pack the drones into missiles to quickly insert them behind enemy lines. A long-range cannon would also not be covered by the INF treaty.

The trend in favor of big guns reflects the Pentagon’s reorientation towards preparing for high-intensity conflict against near-peer opponents. While the United States retains an edge in terms of airpower compared to Russia or China, it is now trying to catch up in its ground-artillery game to curtail the asymmetric threat posed by both countries’ more developed surface-to-surface missile systems—and even potentially take out air defenses faster to enhance the effectiveness of U.S. air power.