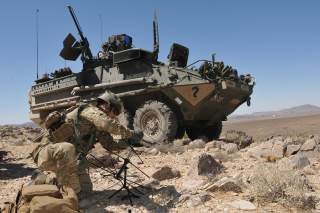 The leadership of the U.S. Army is on a mission to radically alter the way it does acquisition and sustainment. Published reports regarding this reform effort have focused largely on the creation of eight pilot cross functional teams (CFTs) intended to improve the speed and effectiveness of generation process requirements. These CFTs have been described as the first step towards the creation of a modernization command.

In a series of directives, former acting Secretary of the Army Kevin McCarthy proposed changes to the entire acquisition “system.” These directives call for the integration and synchronization of Science and Technology programs, improved cost efficiency of sustainment, streamlined contracting, better cost estimation and resource management, sensible testing and the development of acquisition performance assessment metrics.

A CFT brings together all the relevant expertise and stakeholders in an organization to work collaboratively on a common problem. In theory, this allows for more rapid and comprehensive sharing of information, the conduct of tradeoff analyses, the identification and resolution of problems before they become major flaws and improved life cycle of an item or product.

The eight pilot CFTs are focused on the Army’s modernization priorities. They are about the future force and ways of bringing that future closer to the present. They have a hard job. It is no small challenge to anticipate what capabilities will be required decades hence and to marry that vision with predictions regarding the products that might emerge in the future from current investments in Science and Technology. Add to this the need to incorporate considerations of cost, producibility, sustainment and training into requirements documents.

But an equally difficult challenge for Army leaders is bringing the current force into the future. Even if current reform efforts are wildly successful and the acquisition system becomes fast, lithe, efficient and effective, the Army two decades hence will still consist largely of platforms, weapons and other systems that are in the 2017 force.

Modernization is not a switch to be flipped on or off as implied by the creation of a modernization command. In reality it goes on constantly across the Army. Virtually every Army asset gets upgraded during its service life, sometimes repeatedly. For example, the Abrams main battle tank has gone through multiple enhancements and upgrades in the forty years since it entered service. Its most advanced variant, the M1A2 SEP v3, is a different, much more capable and lethal platform than the first M1A1.

An example of the need to think about modernization over time and across multiple platforms or weapons systems is the tactical wheeled vehicle (TWV) fleet. The Army has a strategy for this fleet which focuses largely on modernization with new vehicles while sustaining the legacy vehicles as necessary. But this strategy was published in 2010. Since then new threats have emerged, concepts of operations have evolved and new technologies have appeared.

Today the TWV fleet consists almost exclusively of some 120,000 High Mobility Multipurpose Wheeled Vehicles (HMMWV) or Humvees. Like the Abrams, the HMMWV fleet has gone through multiple evolutionary cycles involving both changes to the vehicle’s structures, drive train and mobility as well as adding new weapons electronics and even sensors. New options have become available, including a Humvee- mounted 105mm howitzer.

The TWV strategy proposes introducing a new platform, the Joint Light Tactical Vehicle (JLTV). The current plan is to acquire about 49,000 JLTVs at a cost of approximately $39 billion over the next two decades. The strategy is to reduce the total number of Humvees, particularly those that have not been upgraded with additional armor and more powerful engines. But even 20 years hence, the Army will be operating some 50,000 Humvees across Active and Reserve Components.

The only way the Army can conceive of modernizing the TWV fleet is by buying more JLTVs and reducing the number of Humvees. This is the well-established but all too narrow understanding of modernization. It is likely to prove too expensive. Also, it repeats the oft-observed problem of designing and acquiring a capability for one threat environment only to see it change over time.

The Army needs a new approach to its TWV fleet. A procurement and sustainment plan based on a strategy devised in 2010 doesn’t seem particularly sensible in late 2017. Where once the Army looked at its multiple fleets of vehicles almost solely through the lens of force protection, new threats and changing operational concepts have widened the viewing aperture to include lethality and mobility. Given the intensity and immediacy of the threat environment, a TWV strategy that focuses largely on a single new platform, and which will take decades to unfold may no longer make sense. The Army needs to consider anew how it should recapitalize the legacy Humvee fleet in order to ensure not only its continued viability but greater effectiveness.

Perhaps the solution to this problem is a CFT for the TWV fleet. Determining the size and composition of the TWV fleet is a matter of tradeoff between factors similar to those that will occupy the eight initial CFTs: acquisition costs, capabilities, timeliness, sustainability and flexibility. A CFT could integrate the perspectives of the various acquisition stakeholders, address the desirable mix of new and upgraded platforms, involve the user community-- which is not monolithic-- and improve the cost efficiency of TWV fleet sustainment. Rather than a strategy based on either the JLTV or the Humvee, the Army needs one that is based on a balanced approach to employing both.

Equally important, a TWV CFT could fundamentally change the way the Army thinks about the long-term management of large and varied fleets of vehicles. The Army tends to expend almost all its energy and attention on getting a new capability through development and into production. Yet, it is the period after initial procurement where the Army will spend the most money and when platforms often will undergo repeated upgrades. Modernization is a continuing process, not a singular event that takes place at program start.

A TWV CFT could pioneer a new way for the Army to manage major programs. A military platform is made up of a set of constituent systems that evolve at different rates. CFTs will need to think in terms of multiple, parallel technology streams coming to fruition over time. For such a CFT the job would not be done when the requirements document is published. This would only be the end of the beginning. A TWV CFT would be responsible not only for the development and procurement of the JLTV but more importantly, for sustaining and upgrading the large and capable Humvee fleet.