The Art of the Deal: Can Trump Reach Agreement on Ukraine with Putin? 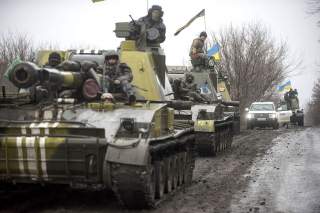 President Donald Trump, an American nationalist committed to the restoration of America’s economic prosperity, particularly the strength of its middle class and the rule of law and peace abroad, is now pitted against President Vladimir Putin, the Russian nationalist, on key national-security matters in Europe. It’s unclear what the final result will be, but as Trump argued in April 2016, it’s definitely time for a new American strategy.

For the Trump administration to reshape relations with Moscow, it’s important to realize that Vladimir Putin, like his country, has a foot in two camps—the Bolshevik and the Tsarist camps. George Kennan’s advice to President Truman in 1947 is still instructive: “It is a sine qua non of successful dealing with Russia,” he wrote, that “demands on Russian policy should be put forward in such a manner as to leave the way open for a compliance not too detrimental to Russian prestige.”

Putin is calculating, well educated and self-aware. Putin was not surprised that his seizure of Crimea provoked a military confrontation with the West. And despite damaging sanctions and almost universal hostility to Moscow’s act, Putin guided Russia through the economic storm with surprising success.

These points notwithstanding, to approach Putin with another rendition of Obama’s demands for a Russian retreat from Crimea would be dead on arrival. Crimea was never an integral part of Ukraine—at least not until 1954, when Nikita Khrushchev presented Crimea as a gift to his buddies in the Ukrainian Communist Party (allegedly in a drunken stupor). Most important, Putin’s reconquest of Crimea, his reform and modernization of the Russian Armed Forces, and reinvigoration of Russia’s moribund economy have been characterized by Patriarch Kirill, Moscow’s Orthodox Christian leader, as a “miracle of God.” All Russians may not agree with the patriarch, but most are supportive of Putin.

It is true that Putin wants to return Ukraine to Moscow’s control. Doing so would place Russian military power directly on the Polish border in a position to intimidate the West, a geostrategic posture the tsars also favored. The question is: can Putin be convinced that this outcome is not attainable? The answer is . . . maybe.

Putin knows that there are at least thirty million Ukrainians who will fight against the Russian army if it invades Ukraine proper. Worse, the fierce bloodletting in the Donbas has simply added to the numbers of young Ukrainians violently opposed to Moscow’s rule. Murdering six to twelve million Ukrainians (depending on whose numbers you prefer), as the Bolsheviks did in the 1920s and 1930s, is off the table. In fact, Putin would much prefer to capture the Ukrainian manpower pool, with the goal of augmenting the diminishing numbers of Slavs available for service in the Russian Armed Forces.

Putin is also sensitive to the attitudes inside his own population. It’s one thing for Russians to kill Muslim minorities in the Caucasus, a recurring Russian strategy for three hundred years. However, it’s another to kill Christian Slavs in Ukraine. It’s not popular.

In sum, Putin may not like the idea of abandoning his campaign to restore imperial Russian control of Ukraine proper, but, depending on what President Trump offers, he may well be able to persuade Putin that it makes sense to do so. One avenue worth exploring is a future for Ukraine modeled on the 1955 Austrian State Treaty.

During the Cold War the Austrian State Treaty reestablished Austria as a separate, independent state. Representatives of the Soviet Union, Great Britain, the United States and France agreed that in exchange for the restoration of Austrian national sovereignty and political independence, the Austrian Republic would declare its total and unconditional neutrality. Like the Austrian State Treaty, provisions for a Ukrainian State Treaty could include the prohibition of integration with NATO and a ban on all foreign military bases in Ukraine.

If Putin balks at the idea of a nonaligned, independent Ukraine without foreign bases, he runs real strategic risks. He may yet awaken Berlin, Europe’s sleeping military giant. Germany still has an enormous advantage (along with Sweden, Finland and the Baltic states) in terms of human capital and scientific-industrial power. Putin is quite capable of concluding that it is ultimately smarter to do business with Germany and the northern European states than it is to fight them.

To the east, Putin confronts a powerful Japan that wants to regain the territory it lost to Russia in World War II. It’s no accident that the largest Russian military maneuver since the Cold War ended was conducted in eastern Siberia, not in the West. Until Tokyo gets its wish, the proverbial Japanese hatchet will not be buried. In Central Asia, Chinese economic penetration is growing in ways that must worry Moscow.

Putin also knows that we Americans are part of the West that he confronts in Ukraine, Poland and the Baltic states. Any action Putin takes in eastern Europe based on the assumption that Washington will do nothing in response is foolish. Putin is aware of how surprised Berlin was when Britain declared war on Germany and Austria-Hungary in 1914. With President Trump in power, Washington is no less of a wild card for Moscow today than London was for Berlin in both world wars.

To sum up, Washington and Moscow may never be friends, but they can be limited liability partners, a concept President Trump understands well. And, if a new American grand strategy emerges under Trump, it must consist of managing interests and avoiding unnecessary conflict, not extending the failed policies of the recent past.

Col. (retired) Douglas Macgregor, U.S. Army, is a decorated combat veteran, a PhD and the author of five books. His newest is Margin of Victory: Five Battles that Changed the Face of Modern War, from Naval Institute Press.