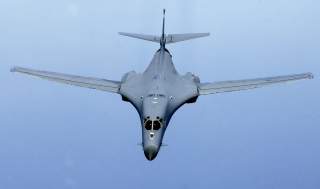 This first appeared in September and is being reposted due to breaking events.

The United States has landed a Rockwell International B-1B Lancer strategic bomber on Osan Air Force Base in South Korea. The Pentagon intends for the temporary deployment to be a signal to North Korea that Washington stands ready to defend the Republic of Korea even as Pyongyang continues its nuclear sabre rattling.

“The bond between the United States and the Republic of Korea (ROK) is ironclad and the strength of that commitment will not be shaken by North Korea's aggressive behavior,” said U.S. Air Force Lt. Gen. Thomas Bergeson, commander of the 7th Air Force. “What we are showing today is just one tool we have to choose from a wide array of options. The alliance grows stronger every day and we remain prepared to defend and to preserve the security of the Korean Peninsula and the region.”

The B-1B flew in from Andersen Air Force Base on the U.S. territory of Guam on Sept. 21 as a part of a U.S. effort to reassure Seoul after Kim Jong-Un’s Democratic People's’ Republic of Korea conducted a nuclear detonation and test fired a new submarine launched ballistic missile in recent weeks. Earlier on Sept. 13, a B-1B flew over the Korean peninsula, but did not land.

“The Korean Peninsula faces a grave security crisis as a result of North Korea's fifth nuclear experiment along with its continued launching of SLBMs and ballistic missiles despite the concerns of the International community," Lt. Gen. Lee Wang-kuen, ROK Air Force’s operational commander, said in a statement. “The ROK-US Combined Air Forces, acutely aware of this climacteric situation, maintains a close information sharing and a robust combined operational capability. Should the enemy provoke us once again, the Combined Air Forces will respond and eliminate their will and capability to fight.”

The B-1A was originally designed during the 1970s as a high-altitude, Mach 2.0-capable nuclear bomber. However, President Jimmy Carter cancelled the program on June 30, 1977, in favor of air launched cruise missiles (carried onboard the B-52), intercontinental ballistic missiles and what eventually became the Northrop Grumman B-2 Spirit stealth bomber after it became apparent that penetrating Soviet airspace at high altitudes in a conventional non-stealthy aircraft was likely a suicidal endeavor.

President Ronald Reagan eventually revived the Lancer program on Oct. 2, 1981, however the new B-1B was optimized for low-level penetration. Additionally, the aircraft was modified with new engine air intakes and other upgrades to reduce its radar cross-section. The resultant B-1B aircraft no longer possessed Mach 2 capability—topping out at roughly Mach 1.2—but had much better survivability.

Following the Cold War, the Air Force removed the B-1B fleet’s nuclear capability and converted the aircraft into a conventional weapons platform. It has performed very well in the conventional role over Iraq and Afghanistan. Over the years, the Air Force has added a host of precision-guided munitions, data-links and sensors into the venerable bomber to keep it relevant into the future. Indeed, the Air Force is in the midst of upgrading the bombers with new avionics including a new Northrop Grumman Scalable Agile Beam Radar—Global Strike active electronically scanned array radar amongst other modifications.

However, even though the Air Force is upgrading the venerable B-1B so that it remains relevant for decades to come, the Lancer cannot survive inside heavily defended airspace. At best, the B-1B can operate in a medium threat environment. The Air Force’s fleet of 20 B-2 stealth bombers are currently the service’s only strategic bombers that can penetrate deep into an anti-access/area denial bubble defended by advanced Russian or Chinese-made surface-to-air missile systems such as the S-300V4, S-400 or HQ-9.

In the future, the Air Force will rely on the new Northrop Grumman B-21 Raider stealth bomber to ensure that it can hit targets around the globe inside even most heavily defended airspace. The Raider is expected become operational by 2030. The Air Force hopes to buy a minimum of 100 Raiders, but in an ideal world would prefer to have roughly 200 of the new stealth bombers.