Is the B-21 Stealth Bomber Too Secret? 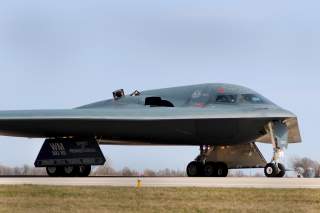 For Bloomberg Politics, Anthony Capaccio reports recently that the US Defense Department’s Inspector General (DoD IG) has opened an investigation, at the behest of the Congress, “into whether the Air Force has imposed excessive secrecy on fundamentals of its $80 billion program to develop and build the new B-21 bomber.” The obscurity into which the Air Force has placed one of its top procurement priorities is remarkable: even the estimated unit price is classified. The stated reason is plausible: from such a figure potential adversaries might infer the bomber's rough size, and thus start tuning their radars before the prototype is built. Fairly, were the B-21 a “black” program, whose very existence were obscured, we would know far less. All the same, it’s fair to ask how much secrecy is too much,  and how we might know.

Back in October 2015, in our essay on the “Mystery Plane,” Rachel Rizzo (now at the CNAS) and I wrote of how “the secrecy around the USAF’s LRS-B [now the B-21] brings military value, but some ill-understood costs.” We noted at the time how our colleague August Cole had suggested to us that

we can indeed easily argue about secrecy, for we know little about the real value—and cost—of our assumptions about secrecy. Classification may improve the American advantage in relative innovation, but only so long as the Chinese don’t once again steal the source codes. Classification, however, does nothing for the absolute progress of innovation, and hinders spillover into commercial endeavors. Eventually, secrecy can also hinder competition, for highly classified programs at best create walled gardens of a few cleared subcontractors from whom to choose. Then, in a second-order effect, industrial structure can be profoundly negatively affected, as those not read-in seek other markets, with fewer barriers—and perhaps higher margins to boot. Over the long run, too much secrecy chases away at least some of the best talent: national security is a compelling call, but there are lines of work with greater public glory and fewer administrative headaches. Just marketing such an obscured program is challenging too—and this may be why the LRS-B seems backed by more momentum than enthusiasm from professionals across industry and government.

I apologize for recycling the commentary, but the issue has enduring consequence. At this point, we should hope for a methodologically broad inquiry. For if the DoD IG focuses just on whether regulations were broken, then the government will not get the answers it needs. More usefully, the IG could begin by reviewing the literature on the economic inefficiencies of secrecy: patents and trade secrets protect investments, but they also restrain positive externalities. The IG could then ask the Pentagon's Manufacturing and Industrial Base Policy office, and its Procurement and Acquisition Policy office, about previous classified studies into this question. The IG should consider surveying senior executives and senior engineers, perhaps retired from defense contracting, about their experiences with programs now out of the black. That sort of study could produce some penetrating findings. They will probably, though unfortunately, also be classified.