The B-52 Bomber: Now Armed with Lasers? 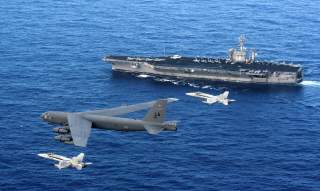 As technology progresses, particularly in the realm of autonomous systems, many wonder if a laser-drone weapon will soon have the ability to find, acquire, track and destroy and enemy target using sensors, targeting and weapons delivery systems – without needing any human intervention.

While that technology is fast-developing, if not already here, the Pentagon operates under and established autonomous weapons systems doctrine requiring a “man-in-the-loop” when it comes to decisions about the use of lethal force, Zacharias explained.

Air Force scientists are working to arm the B-52 with defensive laser weapons able to incinerate attacking air-to-air or air-to-ground missile attack.

Offensive and defensive laser weapons for Air Force fighter jets and large cargo aircraft have been in development for several years now. However, the Air Force Research Lab has recently embarked upon a special five-year effort, called the SHIELD program, aimed at creating sufficient on-board power, optics and high-energy lasers able to defend large platforms such as a B-52 bomber.

“You can take out the target if you put the laser on the attacking weapon for a long enough period of time,” Air Force Chief Scientist Greg Zacharias told Scout Warrior in an exclusive interview.

Given that an external POD would add shapes to the fuselage which would make an aircraft likely to be vulnerable to enemy air defense radar systems, the bolt-on defensive laser would not be expected to work on a stealthy platform, he explained.

However, a heavily armed B-52, as a large 1960s-era target, would perhaps best benefit from an ability to defend itself from the air; such a technology would indeed be relevant and potentially useful to the Air Force, as the service is now immersed in a series of high-tech upgrades for the B-52 so that it can continue to serve for decades to come.

Defending a B-52 could becoming increasing important in years to come if some kind of reconfigured B-52 is used as the Pentagon’s emerging Arsenal Plane or “flying bomb truck.”

Lasers use intense heat and light energy to incinerate targets without causing a large explosion, and they operate at very high speeds, giving them a near instantaneous ability to destroy fast-moving targets and defend against incoming enemy attacks, senior Air Force leaders explained.

Defensive laser weapons could also be used to jam an attacking missile as well, developers explained.

“You may not want to destroy the incoming missile but rather throw the laser off course – spoof it,” Zacharias said.

Also, synchronizing laser weapons with optics technology from a telescope could increase the precision needed to track and destroy fast moving enemy attacks, he said.

Another method of increasing laser fire power is to bind fiber optic cables together to, for example, turn a 1 Kilowatt laser into a 10-Kilowatt weapon.

“Much of the issue with fiber optic lasers is stability and an effort to make lasers larger,” he explained.

Targeting for the laser could also seek to connect phased array radars and lasers on the same wavelength to further synchronize the weapon.

Low cost is another key advantage of laser weapons, as they can prevent the need for high-cost missiles in many combat scenarios.

Air Force Research Laboratory officials have said they plan to have a program of record for air-fired laser weapons in place by 2023.

The first airborne tests are slated to take place by 2021, service officials said.

Air Force leaders have said that the service plans to begin firing laser weapons from larger platforms such as C-17s and C-130s until the technological miniaturization efforts can configure the weapon to fire from fighter jets such as an F-15, F-16 or F-35.

Air Combat Command has commissioned the Self-Protect High Energy Laser Demonstrator Advanced Technology Demonstration which will be focused on developing and integrating a more compact, medium-power laser weapon system onto a fighter-compatible pod for self-defense against ground-to-air and air-to-air weapons, a service statement said.

Air Force Special Operations Command is working with both the Air Force Research Laboratory and the Naval Support Facility Dahlgren to examine placing a laser on an AC-130U gunship to provide an offensive capability.

Another advantage of lasers is an ability to use a much more extended magazine for weapons. Instead of flying with six or seven missiles on or in an aircraft, a directed energy weapon system could fire thousands of shots using a single gallon of jet fuel, Air Force experts said.

Overall, officials throughout the Department of Defense are optimistic about beam weapons and, more generally, directed-energy technologies.

Laser weapons could be used for ballistic missile defense as well. Vice Adm. James Syring, Director of the Missile Defense Agency, said during the 2017 fiscal year budget discussion that “Laser technology maturation is critical for us.”

And the U.S. Navy also has several developmental programs underway to arm their destroyers and cruisers will possess these systems to help ships fend off drones and missiles.

As technology progresses, particularly in the realm of autonomous systems, many wonder if a laser-drone weapon will soon have the ability to find, acquire, track and destroy and enemy target using sensors, targeting and weapons delivery systems – without needing any human intervention.

While that technology is fast-developing, if not already here, the Pentagon operates under and established autonomous weapons systems doctrine requiring a “man-in-the-loop” when it comes to decisions about the use of lethal force, Zacharias explained.

“There will always be some connection with human operators at one echelon or another. It may be intermittent, but they will always be part of a team. A lot of that builds on years and years of working automation systems, flight management computers, aircraft and so forth,” he said.

Although some missile systems, such as the Tomahawk and SM-6 missiles, have sensor and seeker technologies enabling them to autonomously, or semi-autonomously guide themselves toward targets – they require some kind of human supervision. In addition, these scenarios are very different that the use of a large airborne platform or mobile ground robot to independently destroy targets.