The Big Problem When It Comes to Building a Much Bigger U.S. Navy 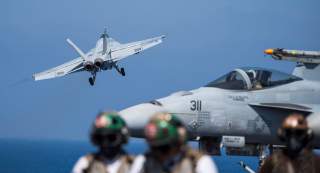 A coalition of shipbuilding champions on Capitol Hill hope to soon celebrate passage of a bipartisan bill that would cement into law a requirement for the U.S. Navy to have a fleet of 355 combat ships.

How that effort would be funded, or when, is anyone’s guess. The budget proposed by President Trump falls way short of what it would cost to ramp up production beyond what the Obama administration had projected, according to analysts.  The Navy currently has 276 combat ships in the fleet.

The bill introduced this week by Rep. Rob Wittman (R-Va.) and Sen. Roger Wicker (R-Miss.) — both from states with a heavy shipyard presence — is meant to send a “strong signal as we head into the National Defense Authorization Act mark-up,” the sponsors said in a news release.  Smooth sailing is expected for the legislation in the House and Senate versions of the 2018 NDAA.

“I believe industry is ready to ramp up production to get us there and Congress must do its part and provide the necessary funding for shipbuilding accounts so we get on the proper glide path to 355,” Wittman said. A bipartisan policy that sets that number as the target “will keep us focused on this critical endeavor.”

Despite the heightened publicity generated by the proposed legislation, the stark reality is that a 355-ship Navy is largely unaffordable and a long shot, at best, analysts said. The bill is mostly a symbolic statement that the Navy should have 355 ships as soon as practicable.

The Navy in 2016 rolled out a new assessment of its future fleet demands, increasing its previous requirement of 308 ships by 15 percent to 355 ships. The larger fleet would have more surface warfare destroyers and attack submarines, two categories of ships for which the Navy has sought for years to ramp up production. The growth was justified by emerging global security challenges — China’s continuing naval modernization, resurgent Russian naval activity and difficulties filling requests from regional U.S. combatant commanders for day-to-day presence of forward-deployed ships.

The House Armed Services Seapower and Projection Forces Subcommittee markup of the 2018 NDAA calls for the Navy to procure five more ships above the eight requested by the Trump administration. House Armed Services Committee (HASC) Chairman Mac Thornberry chastised the White House for cutting $1.3 billion in shipbuilding accounts in 2018. “We are going to try to get back on track,” he said. Trump reduced the Navy’s shipbuilding and conversion account from $21.2 billion enacted in 2017 to $19.9 billion for 2018.

Expanding the Navy takes more than just shipbuilding dollars. Even if more money were pumped into ship construction programs, there are additional costs associated with a larger fleet, such as personnel, aircraft, weapons and other equipment that would have to be factored into the Navy’s budget. The reaction from the shipbuilding industry, meanwhile, is “show me the money,” noted defense analyst Roman Schweizer of Cowen Research. “It is important to remember that authorizations need to be matched by appropriations to turn into real hardware.”

The HASC is expected to authorize a $37 billion boost to the defense budget topline over what the Trump administration requested, but it is unclear how much of that would go to shipbuilding. The authorizers’ numbers are viewed as polite recommendations that could be ignored by appropriators, particularly since Congress and the White House are far from consensus on a federal budget strategy -- both on spending and tax revenues.

To jump-start shipbuilding and get on a path toward 355 ships would require an infusion of $152 billion over five years, the Congressional Research Service calculated. That would include ship construction and additional aircraft procurements.

Recognizing that there may not be enough money in the near future to pay for new ships, the Naval Sea Systems Command is studying the possibility of extending the service life of existing vessels, Vice Adm. William Lescher, deputy chief of naval operations for integration of capabilities and resources, told the Senate Armed Services Committee. The Navy also is considering reactivating ships that were taken out of service, Lescher said. These studies are just getting underway, and are part of a “comprehensive approach at accelerating the growth of the 355-ship Navy,” he said. Navy leaders also have told lawmakers that, in addition to new vessels, they need more money for overhaul and repair work to improve the readiness of the current fleet.

Sandra Erwin is a national security and defense reporter for RealClearDefense (where this first appeared). She can be reached at [email protected]. Follow Sandra on Twitter @Sandra_I_Erwin.