The Biggest China 'Threat': War in the South China Sea or Economic Meltdown? 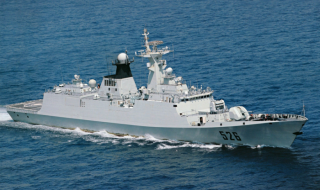 If China’s future course is the vital question, the answers in economy-world are different to those in security-world.

The versions of China offered in the two worlds clash in nature, form and quality.

In security-world, the worry is an ever stronger China.

In economy-world, the threat is a China that stumbles into a looming financial crisis of its own making.

Either world could deliver a belligerent China.

The sky in each world is a different colour, yet ultimately these clashing realities must merge, if not reconcile.

At this bend in the river, we have more to fear in eco-world than what Beijing will do in security-world. Worry more about a weakened China.

Hold onto that thought as security-world prepares for South China Sea feeding frenzy on the decision from The Hague, expected to give China a mighty whack. Harken to the refrain of a frequent frenzied feeder lifting his eyes from the plate.

China’s behavior in the South China Sea is deeply worrying. And this feeder has been feasting on it in the foreign affairs and defense debates of the Oz election, the US discussion of the menace confronting Asia’s ‘principled future’, China’s rumbling push back, and the security-world fear of Asia’s order fading as jaw-jaw slides the war-war way.

My argument is with myself. Blog world wants more than that, so let’s take issue with someone else. Step forward Alan Dupont, one of my guides in security-world for decades, who argues:

‘Those who dismiss the South China Sea dispute as a storm in teacup, or persist with the illusion that China will refrain from antagonizing non-claimant states, need to think again. Far from de-escalating, this dispute is showing all the hallmarks of becoming the most serious security problem for Southeast Asia and Australia since the Vietnam War.’

Shaping as the biggest thing Southeast Asia has faced since Vietnam? Really?

Bigger than Cambodia’s civil war and ASEAN’s confrontation with Vietnam…the agony of Burma or East Timor…the China–Vietnam border war…the fall of Suharto and the possibility that Indonesia could disintegrate as a country?

The total death toll from all those events is in the hundreds of thousands. No body count yet from the South China Sea.

There are a lot of waypoints on the journey from storm in a teacup to the worst since Vietnam.

Australia hopes we are still closer to the teacup than full-on naval warfare. Canberra’s caution was captured in the exquisite moment when the Foreign Minister said Oz policy is to sail 12.1 nautical miles from China’s great mountains of sand. The exquisite bit is that point-one margin on top of 12 nautical miles. Proclaim loudly but push China gently,

Conflicting interests in the South China Sea mean disaster will arrive by accident and escalation will rest on disastrous miscalculation. What China does on Scarborough Shoal after The Hague judgement will show how much more miss and mess is being mixed into the calculation.

South China Sea is a lead indicator for China’s security behaviour. But it ain’t the whole game. Or even the biggest game.

Flip across to eco-world for a moment. China isn’t interested in tearing up this international rules-based order because it’s a winner.

China sits up top of eco-world and wants more; ideally more on its own terms. Beijing is a status quo tidal power. The status quo at home is sacrosanct, while the tidal shift elsewhere should be as slow as it is steady. The tide is shifting their way (riches, power, prestige) and they want it to keep flowing—gently.

In eco-world, China is the world’s second largest economy. Indeed, using purchasing power parity China passed the US to become Number One a year ago—no loud PPP victory polka from Beijing because it doesn’t want to offend Washington. China chairs the G20 and if Asia steers the world economy away from Brexit disaster, it’ll be led by China.

In security-world, conflict with China in the South China Sea is a low-probability but high impact event; long odds that would deliver disaster.

In eco-world, the high impact, high probability event that is approaching with the inevitability of gravity is that China is going to have a financial reckoning. It might be a soft landing or a hard landing but judgement day—financial bust or abrupt slowdown—is a-comin’.

The Economist laid out the logic and figures for the coming debt bust that will crunch asset prices and the real economy, arguing that ‘a Chinese crisis is likely to be sharper and more sudden than Japan’s chronic malaise.’

We had a taste with China’s stock market panic last year—crashing correction presenting as cascading catastrophe. The Party has made the dreadful discovery that the market won’t obey orders.

No wonder President Xi is cracking down on dissent and purging hard. He’s yanking on the power levers that still work.

For Australia, a China crash is the biggest economic threat we face. Ditto for Asia. And just about everybody else.

Financial reality is catching up with China fast in eco-world. Pray that it lands soft not hard.

And that in security-world, the South China Sea stays closer to the teacup end of the scale.