The Birth of Military Strategy: Enter the Battle of Salamis 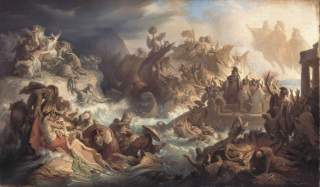 The dichotomy of strategy and tactics in war did not solidify as a concept until the publication of Carl von Clausewitz’ On War in 1832. Since then the relationship between the two has been hotly debated, along with the subsequent interjection of the operational level of war. What is not debated are the concepts themselves. Tactics and strategy are related but they are not the same thing. Strategy, of course, comes from the word ancient Greeks used for their generals, strategos. Clausewitz’s ideas were intended to be applicable for all of military history so it can be instructive to look into the past — at the genesis of strategy itself.

A strategos was not solely concerned with winning battles — the tactics. He was, in the later words of Clausewitz, concerned with the use of battle to further the political ends of his city. In other words, the strategos had to keep the long-term goal in mind and ensure that the tactics work to further that goal. A tactician would never abandon key terrain without a fight; it makes little tactical sense. But strategy may demand that very thing and tactics must be subordinated. This exact situation occurred during the Persian Wars in Fifth Century Greece. The first major Greek strategist, and perhaps the most gifted, was Themistocles.

If a strategist must have a gift for long-term planning, then Themistocles was a born strategist. As a child, he reportedly fostered friendships with well-born children despite rules against such liaisons in pre-democracy Athens. When Themistocles was born in 524 BC, there was little chance he would one day achieve political power or have any opportunity to make use of those friendships. Themistocles as a child could not have known exactly how such connections would benefit him.

Around 508 or 507 BC, the reforms of Cleisthenes turned Athens into a democratic state, offering a path to power for the young Themistocles. He seems to have immediately grasped how he could succeed in the new system. He used his humble origins as a way to build a support base among the polis’ newly enfranchised poor. Simultaneously, he worked as a lawyer, which maintained his connections with the aristocratic population. When elected Archon, he began a program which fortified Athens’ port city of Piraeus. Again, this is an example of strategic vision; those fortifications were a key component of Athenian strategy during the Peloponnesian War about 100 years later. During this time, Themistocles also participated in the Battle of Marathon in 490 BC, possibly in a leadership position.

It was clear to the Greeks, however, that the Battle of Marathon did not mark the end of the Persian threat. In 480 BC, ten years after Marathon, the cities of Greece were aware of Xerxes’ impending invasion, and of its intended size. By this time, Themistocles was the most powerful man in Athens. While he was no tyrant, he used his connections, his oratory skills, and the Athenian process of ostracism to dominate the political scene. Thus, when the leading cities of Greece discussed the coming war, Themistocles spoke for Athens.

Even though Athens thus far had been a leader in both defeating the Persians at Marathon and supporting Ionian Greek cities in Asia Minor in rebellions against Persian rule, the Spartans wanted command over all Greek forces in the war. This included naval forces, of which the Spartans had little experience while the Athenians were already a maritime power. Themistocles conceded. It is a testament to Themistocles’ powers of persuasion that the Athenian population accepted this back seat leadership position for its Navy, especially since this strategy would demand even greater sacrifice.

The first plan was to block a pass in northern Greece while Attica was abandoned, but the Persian Army moved through the pass before the Greeks were ready. At the next meeting of the allies, the Greeks accepted a strategic plan that may have been wholly devised by Themistocles. A combined force of Greek troops would block the Persian armies on land at Thermopylae through which Xerxes would have to pass. Simultaneously, the combined Greek navies would block the Persian fleet at the straits of Artemisium. If either of those battles were lost, then Attica and Athens would be abandoned and its population evacuated to the Peloponnesus. The narrow route from Attica into the Peloponnesus would be fortified and the Allied navies would confront the Persian fleet at Salamis.

The genius of this strategy is clear. It plays to the strength of the Greek hoplite infantry by planning tactical defenses on favorable ground that would force Xerxes to attack them directly with only a portion of his troops. The same type of restricted terrain was offered by Artemisium, and blocking the Persian fleet prevented Xerxes from using it to supply his army and using it to transport troops around the Greek army at Thermopylae.

As predicted, the Persians met the Greeks at both Thermopylae and Artemisium. In a series of naval engagements, the superior seamanship of the Greeks allowed them to keep the more numerous Persian fleet from passing for three days (reportedly the same three days that the Persian army was engaged with the Greeks at Thermopylae). The Greeks were also assisted by a storm that wrecked a Persian flanking detachment as it sailed. As mentioned above, Themistocles was not in command of the fleet but his influence over the Athenian fleet that he did command (along with some bribery) allowed him to guide the decisions of Eurybiades, the overall Spartan commander who favored a quick retreat.

After the fleet received word of the fall of the Greek army at Thermopylae, however, the Greek fleet could do no more. It sailed south for Salamis but here, again, the Greek alliance balked. Some of the Athenian population had been evacuated to the island of Salamis, but the rest had made it to the Peloponnese, mostly at Troezen. As the land forces prepared to blockade the narrow isthmus leading from Attica, the Greek allies decided not to fight at Salamis but to withdraw the fleet further west. Themistocles was only able to convince the allied fleets to stick to the original plan by threatening to leave the alliance entirely; a bold move since the bulk of the Athenian civilians were refugees in the Peloponnese.

He also resorted to deception in order to force a fight on his chosen terrain. He sent a message to Xerxes describing the attitude of the other Greeks. He recommended that Xerxes send his fleet to blockade the opening of the Bay of Salamis, trapping the Greek fleet. Themistocles sweetened the deal by promising to defect once battle was joined and attack the other Greeks with the whole Athenian fleet. Herodotus states that the reason for this was to force the Greeks to fight at Salamis, but there are valid reasons why he would have wanted to draw the Persian fleet to Salamis. The location was key. The narrow confines of the bay would prevent the Persian fleet from using its numerical advantage so the superior Greek seamanship and proficiency in ship boarding would win the day. There were also disadvantages. The Athenians sailors would see the smoke of Athens itself as it burned. If the Greek navy failed there would be no escape; neither for them nor for the civilians on the island of Salamis. In the end, Xerxes took the bait. Artemisia, his favorite admiral, was the only one of his advisors to warn him of a trap, but she was overruled.

The details of the battle itself remain sketchy. Reportedly, Athenian civilians on Salamis gathered at the shore to watch the outcome. Across the bay on the mainland Xerxes himself watched from a cliff. At some point, the Persian fleet did enter the restrictive waters of the Bay and the Greek fleet may have feigned a retreat to draw them in further. The Greeks kept a line abreast as if their ships were a phalanx, operating as a group and preventing the Persians from outflanking them. The Persian ships reportedly operated independently and attacked in piecemeal. Needless to say, the Athenian fleet did not defect. The Persian fleet was mauled and routed. Once the Persian fleet lost cohesion and began to flee, Artemisia reportedly rammed and sank Persian vessels in her haste to escape the disaster that she alone had predicted.

The Battle of Salamis — 2,495 years ago this month — was not the end of the war, but its result was decisive. It was the culmination of Themistocles’ strategic vision and resulted in the exact situation he had intended. Xerxes was forced to leave a far smaller army in Greece and withdraw the majority of his troops back to Asia Minor; both to feed them and to put down rebellions that had sprung up in his absence. This remaining army, stranded in a ravaged and barren Attica, was defeated by a combined Greek army. Themistocles himself remained politically dominant in Athens for a time, but was eventually exiled by the always-competitive Athenian democracy. He fled to Persia and was made a governor by Artaxerxes I, son of Xerxes.