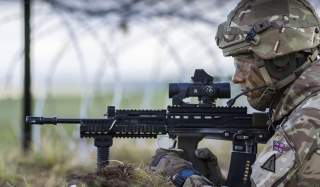 Many armies around the world base their organizational structures, training, tactics and traditions on the British military. And today, Her Majesty’s Armed Forces are fighting the Islamic State in Iraq and Syria, training fledgling armies in Afghanistan and Somalia, keeping watch in the Falklands and operating in many other places around the world.

But these missions have put a great deal of strain on the British military and its troops. At the same time, fewer and fewer young Brits feel compelled to take up the mantle.

It’s a particularly acute problem for the British Army. The British parliament released data showing that 6,910 new recruits joined the Army over the past 12 months. The target was 9,580 — adding up to a shortfall of 28 percent.

The British military — the Army in particular — has been very active in the 21st century. In May 2000, hundreds of British paratroopers with full-force protection intervened in Sierra Leone’s civil war as part of Operation Palliser fighting Revolutionary United Front rebels. It was a relatively short intervention and was widely hailed as a success.

In Iraq, while American troops fought to battle insurgents and terrorists in the Sunni triangle north of Baghdad, British troops to the south battled Iranian-backed Shia militias and navigated an incredibly corrupt local government system — similarly plagued by Iranian influence.

Meanwhile, as the world focused on Iraq’s sectarian woes and the American-led Surge campaign, under-resourced British troops were also taking the lead in Afghanistan in the country’s volatile southern Helmand province.

Alongside Canadian and Danish troops, the Brits engaged in some of the heaviest fighting of a war that many Western officials at the time believed was winding down. The resurgent Taliban would prove to be a stubborn foe.

U.S. Marines eventually took over in Helmand. The Americans found the Taliban to be a tough opponent, and that a clearly defined “victory” remained similarly elusive.

British planes also joined the NATO mission to support Libyan rebels in their war with dictator Muammar Ghadafi, and have pounded Islamic State targets in Iraq and Syria.

British forces continue to support operations for peacekeeping missions. In 2015, then-Prime Minister David Cameron pledged that his country would boost support for international peacekeeping operations, promising troops for missions in both Somalia and South Sudan.

It wasn’t a move motivated by altruism. The world is currently experiencing what may be history’s worst refugee crisis with millions of people displaced. Some have made their way to Europe in hopes of resettling in Britain. A vocal contingent of Britons have expressed strong opposition to immigration, and refugees in particular. Cameron wanted to stem the flow at the source.

“If we can, as peacekeepers, help to maintain order and peace and see stable development in that country then that is going to be, again, less poverty, less migration, less issues that affect us back at home,” Cameron told the BBC.

That strong opposition to immigrants and refugees in some corners of the United Kingdom was one of many factors in the recent referendum that saw Britain vote to leave the European Union.

Theresa May, Cameron’s successor, hasn’t backed down from missions abroad and has emphasized the mission in Somalia — where British troops have already been active for some time. She asserted that the United Kingdom will play a key role in the fight against Al Shabab, a hardline Islamist group. She’s also promoted greater cooperation with Arab Gulf countries.

However, the broad reach of these operations comes at a cost.

Even as the British military continues sending troops around the globe on potentially dangerous missions, its resources are shrinking. In addition to the toll of continuously deploying a relatively small body of troops, there have been increasing cuts to budgets and equipment.

The Royal Air Force has considerably less aircraft than it did a decade ago. The Royal Navy, once the linchpin of British imperial power, will have no operational aircraft carriers until the early 2020s. And Britain’s decision to leave the European Union is likely to have at least some long term consequences for its military.

The recruitment figures were released after a written parliamentary question by Kevan Jones, a Labour M.P. and a former minister for veterans. He raised concerns that ministers may be using a lack of manpower to balance the defense budget while continuing to put further strain on soldiers.

“These figures show just how serious the Army’s manning shortfall is and ministers need to clarify whether or not this is a deliberate attempt to balance the defense budget,” Jones said. “No action on this issue will just lead to further overstretch for our armed forces and in turn even worse recruitment and retention.”

Much like in the United States, the all-volunteer British military has become in many ways isolated from the society it was built to serve. Military families are often inter-generational — and the days of fighting for survival during the Blitz that once pulled the nation together are long gone.

For a young person, careers and other pursuits can often be a more attractive option than joining the military. “A national skills shortage and a strong growing economy mean that we cannot take future recruitment for granted,” British Minister of State for Defense Earl Howe said.

“In response we have in place a number of short and long-term plans to ensure that the offer of military service in the armed forces continues to be competitive, so that we can recruit and retain in sufficient quantity to meet the strength targets.”

In August 2016, a leaked military document painted a bleak portrait of Britain’s ability to fight against Russia if the two powers were to ever come to blows. It noted that Russian hackers and electronic warfare specialists could hijack friendly drones and potentially disrupt other critical operations.

The document apparently drew from lessons learned during a training exercise in Ukraine.

“In the unlikely event of a direct confrontation between NATO and RUS [Russia], we must acknowledge that RUS currently has a significant capability edge over U.K. force elements,” the paper stated.

“Due to the fact that some of our high-end military capabilities have been eroded since 2003, we must find ways to ‘fight smarter’ at the tactical level, acknowledging that some adversaries may be armed with weapons that are superior to our own.”

Britain is one of several NATO countries apprehensive about Russia’s bold moves.

As new U.S. President Donald Trump settles into office, a man who has praised Russia and questioned NATO’s relevance, there are concerns about the alliance’s future. U.S. Defense Secretary James Mattis is planning a NATO tour to reassure European allies.

Throughout history, British troops have proven to be resourceful even when thoroughly outgunned and outnumbered. However, looking to the future, the strain on Britain’s military could mean challenges that will severely test that tenacity.