The Case for David Petraeus as Secretary of State 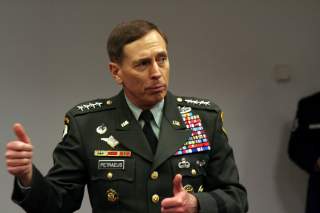 General Petraeus would, in my judgment, be an outstanding candidate for a high-level position in the Trump administration. Full disclosure: I am a big David Petraeus fan and a close, long-standing friend. But I believe the substance of the case for him is objectively rock solid.

Battlefield Qualifications and Beyond

Let’s begin with his military career. There have been several excellent military leaders in the modern era, including standouts such as Gen. Stanley McChrystal and my Brookings colleague Gen. John Allen. But I believe that what Petraeus did with the surge in Iraq reflected a brilliance rarely seen in American military history. This is relevant to the current question of whether Petraeus might be secretary of state, because the challenge of that Iraq job was largely political and diplomatic—working with a military coalition, in close partnership with an Iraqi government and military of uneven quality and dependability, with many ups and downs along the way, in a multidimensional effort that involved economics and diplomacy as much as fighting.

General Petraeus, working with another American hero, Ambassador Ryan Crocker, navigated the shoals of Iraqi politics adroitly and patiently (and self-effacingly). Over the course of the 2007–08 period, when Iraqis of various sectarian backgrounds were persuaded to work together in an operation that reduced violence in Iraq by more than 90 percent, Petraeus and Crocker gradually convinced Iraqi leaders to do the right thing—and then let them take the credit for the decisions, so they would feel ownership of them. Meanwhile, working closely with his second-in-command (first Gen. Raymond Odierno, then Gen. Lloyd Austin)—but also with division commanders and brigade commanders, and even the countless captains, majors and lieutenant colonels with whom Petraeus tirelessly communicated with on a daily basis—Petraeus honed not just the overall strategy, but the local tactics and politics of the battlefield fights. This effort took incredible sophistication, tact and energy.

To be sure, Petraeus did not have to camp out at Valley Forge like Washington, or sleep in unheated tents like Grant, or save the world from the Nazis like Eisenhower. But in terms of a combined political-military-economic campaign, I believe the challenge of the Iraq War may even have exceeded some of those watershed eras in American history. It also rivaled them all in terms of a comeback from adversity and apparently certain defeat. In the modern era, the only thing that comes close was probably MacArthur’s Inchon landing in Korea in 1950. Yet Petraeus never made big mistakes on the scale of the latter, who was eventually fired by President Truman for insubordination and arguably a reckless desire to escalate the Korean War to the Chinese homeland.

Yes, Petraeus did make his own serious mistakes. I would not deny this, and neither would he. Specifically, sharing highly classified information with Paula Broadwell—who had a background in Army intelligence but who at that time had no strict “need to know” based on any government job—violated proper security guidelines, plain and simple. And Petraeus has now gone through a long four-year legal ordeal, admittedly a self-inflicted one. Fortunately for him and the country, that is now effectively over—or at least it should be.

He is also fortunate to have a strong and forgiving family. And many Americans have been blessed by the generosity, patriotism and national service of all of the Petraeuses, who have continued to give back to others in recent years through innumerable activities in support of national security, military families, wounded warriors and other veterans. University students at several institutions of higher learning have also benefited from Professor Petraeus’s teaching and his interest in the next generation in the years since he left government service.

Finally, if there is any doubt about his qualifications for a job that obviously covers far more than the CENTCOM region of the Middle East, it is worth remembering several other distinctive points about Petraeus’s excellent preparation for this kind of job:

• He holds a Ph.D. in international relations from Princeton University.

• He worked closely with the late Gen. John Galvin on European security in the late 1980s, and served in the Balkans in the 1990s.

• As commander of the NATO mission in Afghanistan in 2010–11, he worked closely with most NATO countries as well as countries like Australia and even Japan, and helped develop the so-called Northern Distribution Network which required diplomacy with Russia. He also spent innumerable hours, like other commanders in Afghanistan and other combatant commanders at CENTCOM, with the Pakistanis (and thus wound up thinking a lot about India and China, too).

• As CIA director in 2011 and 2012, he ranged geographically across the whole world, and also developed considerable knowledge about matters such as cybersecurity.

• In his work with private equity firm KKR since 2013, he has ranged globally in ways that have given him far greater exposure to the business world as well. He always understands the importance of economics, even in the tactical fight on the battlefield, and his knowledge of economics and finance are now much deeper than ever before.

• With Bob Zoellick, he codirected a Council on Foreign Relations study on U.S.-Mexico relations in recent years, as well.

By this point, the message I’m trying to get across has probably become fairly obvious, so I’ll wrap things up: not only was David Petraeus one of our finest field commanders in American history, but he would be an outstanding choice for Mr. Trump in a civilian capacity.