The Case for Partnering With Mexico 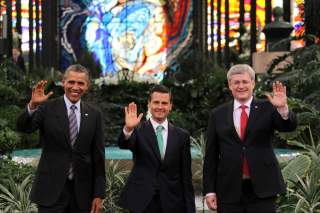 Mexico has been a punching bag in the United States election campaign this year. Rather than hitting our neighbor with insults and threats, however, we should be cementing partnership with Mexico to strengthen our economy and security. The American public has been fed misleading explanations, factual distortions, and bad solutions. A number of the proposed actions regarding Mexico would harm the United States rather than address the challenges we face in creating good jobs, making our economy more competitive, and enhancing border security.

U.S. trade with Mexico supports a net 4.9 million American manufacturing and service jobs spread widely across the United States, according to the Woodrow Wilson Center’s Mexico Institute. Those jobs exist because, under NAFTA, Mexico has become the second largest purchaser of U.S. exports in the world, with Canada being the largest. We trade over a million dollars a minute with Mexico, and the breadth of U.S.-Mexican cooperation is unprecedented, covering trade, public security, immigration, energy, the environment, international affairs, and much more.

Presidential candidate Donald Trump has talked about new tariffs and other potential punitive actions against Mexico, but there has not been serious discussion of the potential repercussions for the 4.9 million U.S. job holders, and their family members, supported by sales to Mexico or for the broader cross-border networks in which 57 thousand U.S. companies sell to and buy from Mexico. The Peterson Institute for International Economics projected a potential loss of millions of jobs if Mr. Trump’s threatened actions against Mexico and China were taken. Mexico’s peso has already been buffeted significantly by the campaign rhetoric.

Immigration from Mexico has been another campaign theme, but more Mexicans have been returning home than coming to the United States for years. There are 1.1 million fewer undocumented Mexicans in the United States today than in 2007, according to the Pew Research Center, and Mexico is working with the United States to manage the increasing flow of migrants from Central America. Reducing those immigration flows will require that the United States, Mexico and others work together to address the causes that lead families and unaccompanied children to take the dangerous journey north.

We do need to better secure our borders against illegal flows of drugs, arms, people, and illicit money, as well as against any potential terrorists.  But polls indicate that border residents agree the proposed 2000-mile border wall is not the best way to manage these threats. Rather, we should keep building more effective law enforcement, justice and anti-drug efforts on both sides of the border, including with Mexican counterparts.

Part of the reduction in Mexican migrant flows is because Mexico’s economy now offers more good jobs and higher living standards created as it participates in the North American production platform built under NAFTA.  A number of U.S. candidates have questioned NAFTA and international trade this year. In both parties’ primaries, NAFTA was blamed for job losses and calls for renegotiating the treaty were heard.

Let’s consider briefly NAFTA. As with all trade agreements, there were winners and losers in the United States, Mexico and Canada. Trade between the three countries, however, grew much more rapidly than trade with the rest of the world. Today, our NAFTA partners are our two largest customers. We trade more with them than with all of the European Union combined and 1.9 times what we trade with China. Trade in North America is four times larger than when NAFTA was signed, and trade with Mexico is almost six times as large as it was in 1993. We sell more to Mexico than to all of the BRICS (Brazil, Russia, India, China, and South Africa) combined.  We should ask ourselves why we would endanger the good U.S. jobs behind these sales and if we want to compromise the competitiveness of North America, which has been ranked as the most competitive region in the world?

A vital reality that is not made clear in political debates is that we are producing many things together across North America. One key study highlights that 40 percent of the value of a finished manufacturing product sold by Mexico to the United States is from U.S. inputs. This is much more than with any other country in the world. It highlights how much of our cross border trade with Mexico is about building things together. A CRV built in Jalisco Mexico, for example, has up to 70 percent of its value from U.S. and Canadian products. That is why trade with Mexico and Canada supports so many millions of jobs across a wide swath of U.S. states. And, on average, jobs for export pay more than other manufacturing jobs.

A new article by economists Theodore Moran and Lindsay Oldenski takes on the charge that outsourcing to Mexico has drained American jobs. They find that contrary to the criticisms, increased offshoring to Mexico by U.S. multinational corporations is associated with greater overall investment and an increase of jobs in the United States. Drawing on company data from 1990-2009, they find that the new investment in Mexico actually led to more Americans jobs being created and more investment in the United States. Moran and Oldenski add that certainly there was “reshuffling” of economic activity, i.e. some jobs were moved south and others often requiring more or different skills were created, but that overall the effect was positive in both countries. An earlier study the Peterson Institute for International Economics found that NAFTA had contributed to the net loss of about 15 thousand jobs a year, but that these losses were offset by other economic gains for the United States and that NAFTA did not have a major impact suppressing growth of U.S. wages.

So, if the major losses of U.S. jobs were not due to NAFTA, what happened to them? One study finds that trade with China can explain the loss of over two million jobs from 1999-2011. Another finds that about 85 percent of the 5.6 million factory jobs lost from 2000-2010 was due to productivity growth, i.e. new technology. These findings about new, more productive technology fit with that fact that U.S. manufacturing output is higher than ever but manufacturing employment has been declining.

Returning to NAFTA, a number of U.S. firms were able to survive because they could diversify production chains across North America. Moran and Oldenski, for example, argue that the U.S.-Mexico-Canada production chain of the Ford F-150 series truck was essential to Ford’s ability to succeed against Asian competition.

Certainly, U.S. policy makers should act to help those who lost jobs and have not found good new ones because of technology or trade, including with better retraining and job search programs, building new infrastructure, and improving educational opportunities. Such steps can also help the United States better compete in the world. But renegotiating NAFTA or punishing Mexico for not wanting to pay for a border wall will not produce the desired results.

NAFTA can be improved. It could be updated to better cover digital commerce, trade in services, stronger labor and environmental provisions, etc. This is what negotiators were trying to do through the new TPP agreement which includes Mexico and Canada. But if TPP does not win approval and if the three governments need to reconsider NAFTA to make it more beneficial for economic growth, it would not be for the reasons often cited in the U.S. presidential campaign. In any case, to boost prosperity, the United States should take steps to make the flows of legal commerce through our cross border production and commerce networks more efficient.

We have had a willing partner in Mexico to make the economies of North America more competitive, to improve work against drug and criminal cartels, to cooperate on migration, and more. Lashing out at Mexico is not the way to go. Mexico, like Canada, should be seen as a partner in building economic growth as well as in strengthening our defenses against threats like terrorism or pandemics. We should be working with both neighbors to re-conceptualize borders so they will enhance security and prosperity. Our relations with Mexico touch the daily lives of more American citizens than any other country in the world, and it is in our national interest to have a prosperous, cooperative neighbor. That should be the spirit in which we work with Mexico.

Earl Anthony Wayne was U.S. Ambassador to Mexico from 2011-15. He is currently a Public Policy Fellow at the Woodrow Wilson International Center for Scholars and the Sol Linowitz visiting Professor at Hamilton College.